A new study by the United Nations Development Programme (UNDP) Thailand delves into the various forms of stigma and discrimination experienced by transgender women, often resulting in violence and abuse, and barriers to accessing employment, education, health care and other social services. 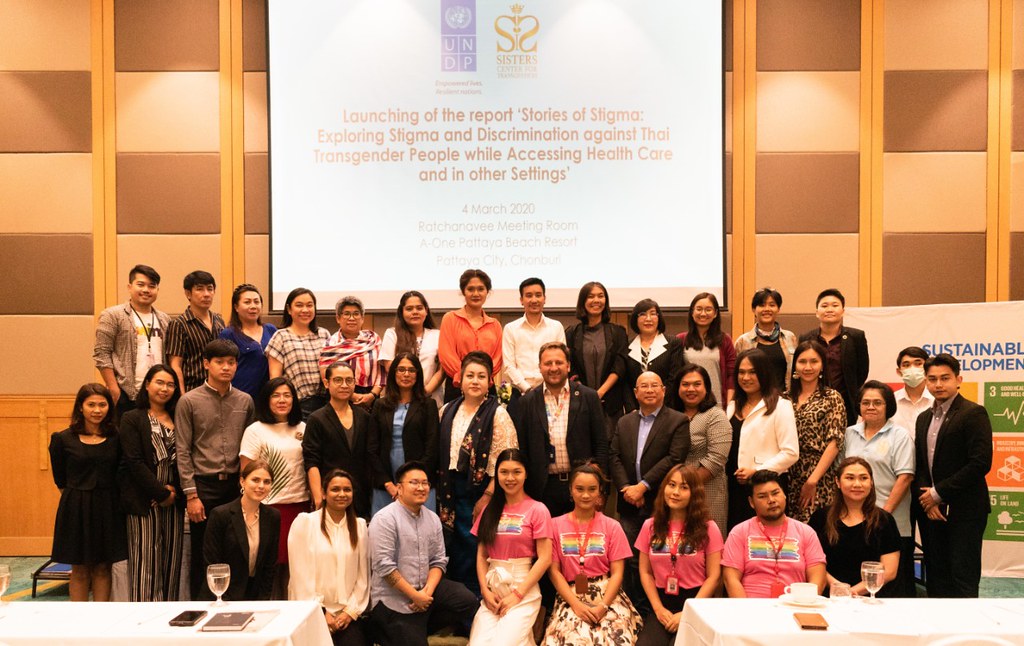 The study, entitled ‘Stories of Stigma: Exploring Stigma and Discrimination against Thai Transgender People while Accessing Health Care and in Other Settings’, was developed in partnership with Sisters Foundation. It explores the ways transgender women are affected by internalized, perceived, vicarious and enacted stigma, and how such experiences affect health-seeking behaviours and health outcomes, especially in relation to HIV treatment and care.

“This study shares first-hand stories of transgender women in Thai society, highlighting the many challenges that they face. In Thailand – and globally – they are among the most marginalized populations, experiencing persistent poverty, social exclusion and poor access to health services,” said Renaud Meyer, UNDP Resident Representative to Thailand. “We need to do more to reduce inequalities and ensure good health and well-being for all so that no one is left behind and the Sustainable Development Goals are realized.”

The study examines stigma during childhood, within the family, at school and in health care settings, as well as stigma within the transgender community and HIV-related stigma. The findings will inform efforts to improve policy guidelines and training of health care providers, ultimately leading to improved health care service delivery for transgender people.

In family and school settings, the participants of the study reported numerous experiences of stigma and discrimination. Mothers were reported to be more accepting of the transgender identity of their child, whereas fathers and other male relatives were usually less accepting. Some fathers even tried to change their child’s gender identity through verbal or physical abuse.

Most participants reported that they hid their transgender identity when they were young. As adults, some of them still pretend not to be transgender in certain situations, especially at the workplace and with family, in order to avoid being stigmatized.

On HIV related stigma, it was widely reported that HIV status-related stigma is much more devastating than stigma related to having a transgender identity. Within the transgender community, a HIV positive transgender woman could be rejected and discriminated even by her peers. The study also found that HIV-related stigma in rural communities is much worse than in urban areas. In an effort to avoid stigma, one participant refused to receive government support and prefered to pay for HIV treatment herself in order to receive it far away from her community and thereby avoid stigma.

“Before, the transgender community only had word-of-mouth stories to explain what they have been through and there was no research to back up the claims. With no evidence, it is difficult to take the issue to the policymakers,” said Thitiyanun Nakphor, Director of Sisters Foundation. “This is one of the very few studies in Thailand that tells the story of transgender people’s experience while accessing health care services.”

While the study did reveal instances of stigma and discrimination by health workers while receiving HIV care and other health care in Pattaya City, the number and severity were low. One participant recalled that when she reported to the hospital and told the nurse that she was there to see the HIV doctor, the nurse immediately grabbed a face mask and put it on. Another participant recalled an instance when she went to have a tooth extracted at a private clinic but was refused care because of her HIV status. The study suggests that the situation is worse in rural hospitals, where staff have less experience dealing with both transgender clients and with people living with HIV.

The most common strategy to deal with perceived stigma and discrimination in health care settings appears to be to not respond. Participants reported that they felt they would not be able to improve the situation by reacting, and also that their health and medical treatment depended on the people who stigmatized them, hence their decision to ignore it.

The findings of the study point to the need for more effective advocacy to increase the understanding of transgender people on how the structure, culture and institutions of Thai society instill, reinforce and perpetuate stigma against them. To achieve this, the report provides recommendations for an advocacy movement based on a broad vision, rooted in understanding the causes of stigma against transgender people, with the overall objective of promoting structural change – starting with legal reform.