On 24 February, students at Chulalongkorn University gathered in the plaza next to the university auditorium in a demonstration against the government following the dissolution of the Future Forward Party (FFP) last Friday (21 February).

However, of the organizers said they are here "not for the love of the Future Forward Party[...]but for our abhorrence of the government." 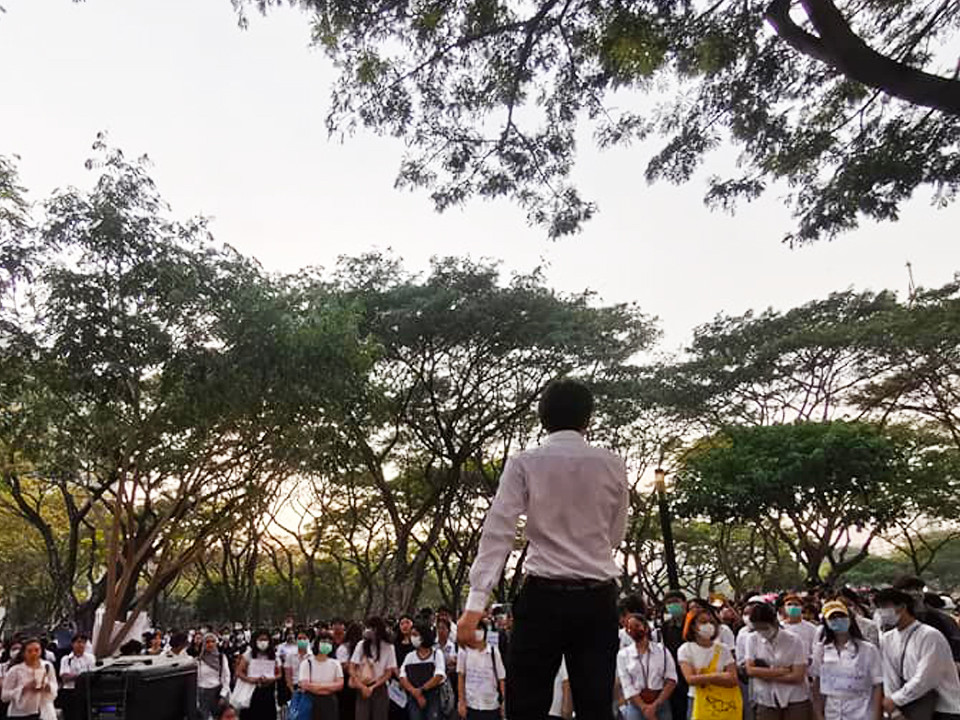 One of the organizers of the rally speaking to the students. 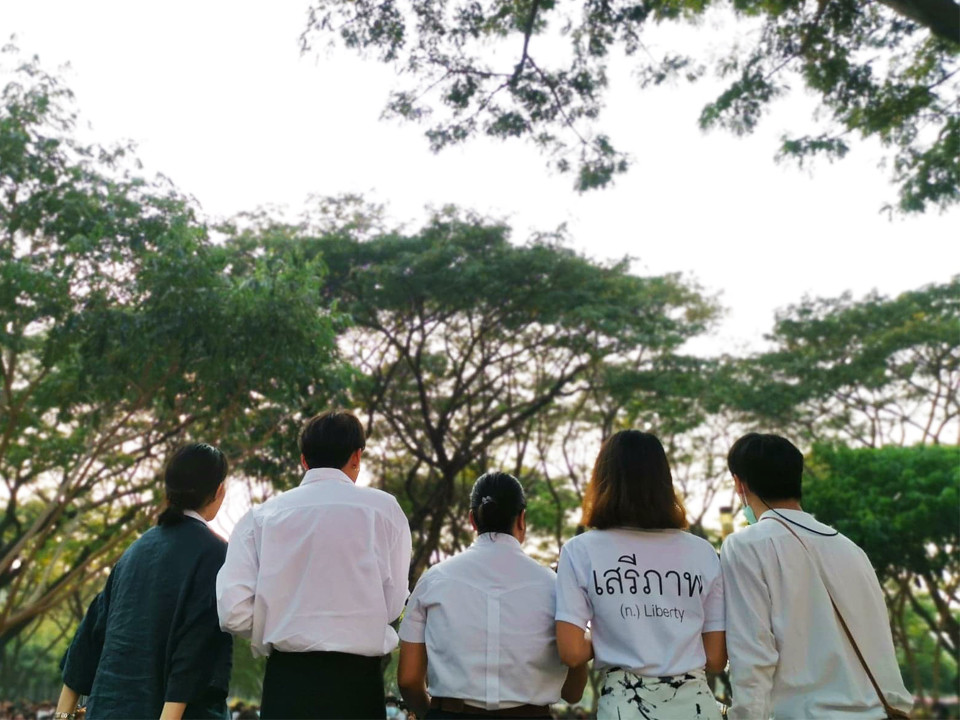 The speakers standing on a table to speak to the demonstrators. One of them is wearing a shirt that said "Liberty" on the back. 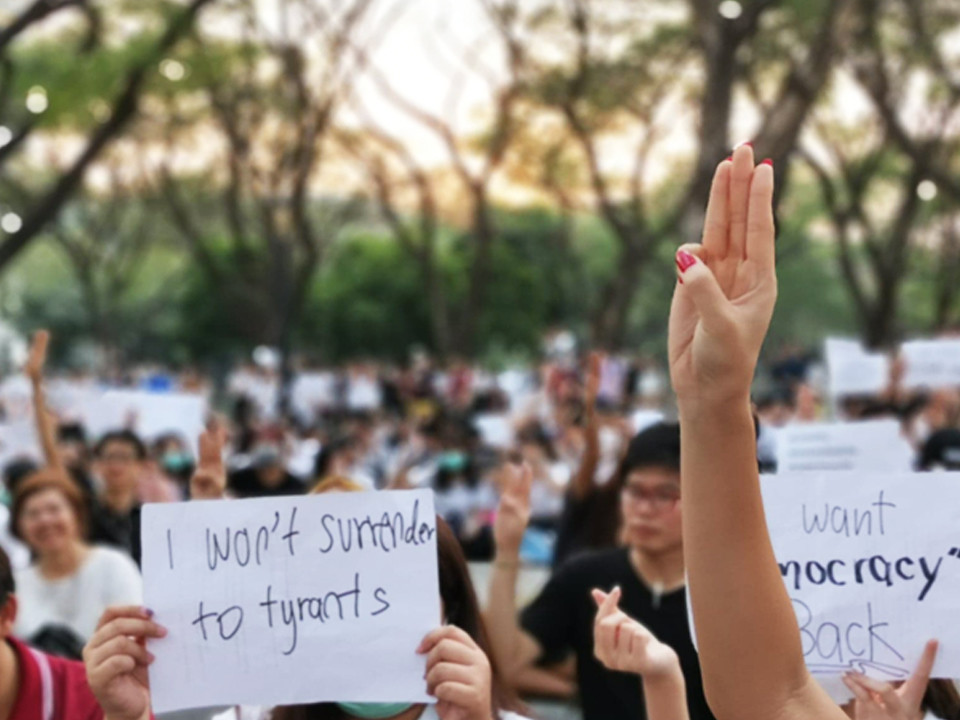 Students holding their hands up in the three-finger "Hunger Games" salute, a well-recognized resistance symbol, while some do a 'mini-heart' gesture, parodying the gesture prime minister Gen Prayut Chan-o-cha did after the press conference about the mass shooting in Nakhon Ratchasima. 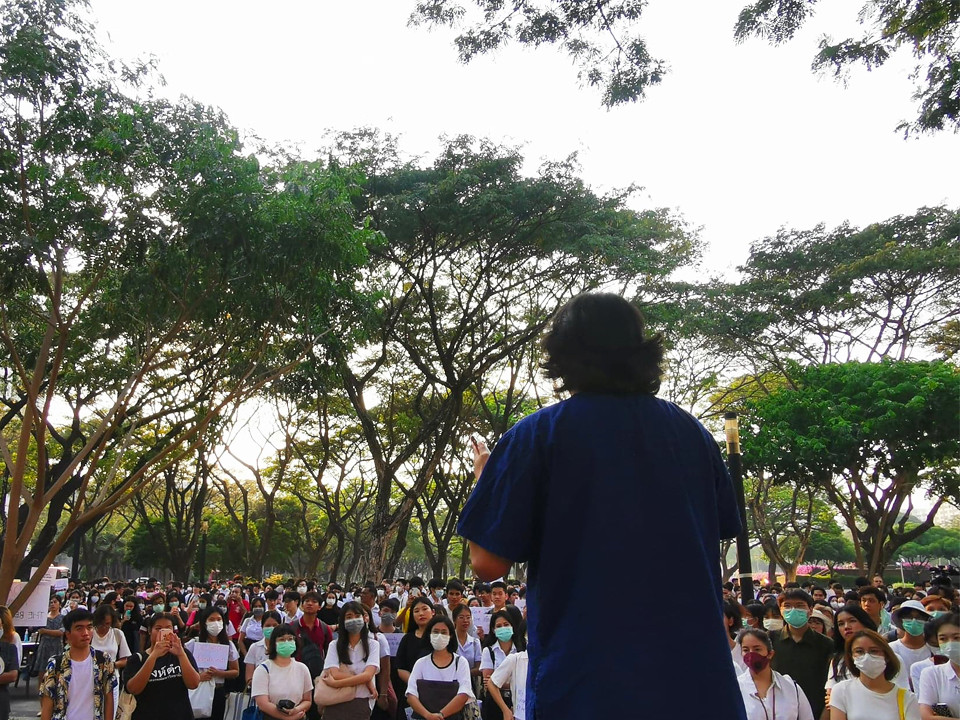 A student dressed like the statue of Jit Phumisak, a revolutionary who was an alumni of Chulalongkorn University, speaking to the demonstrators. 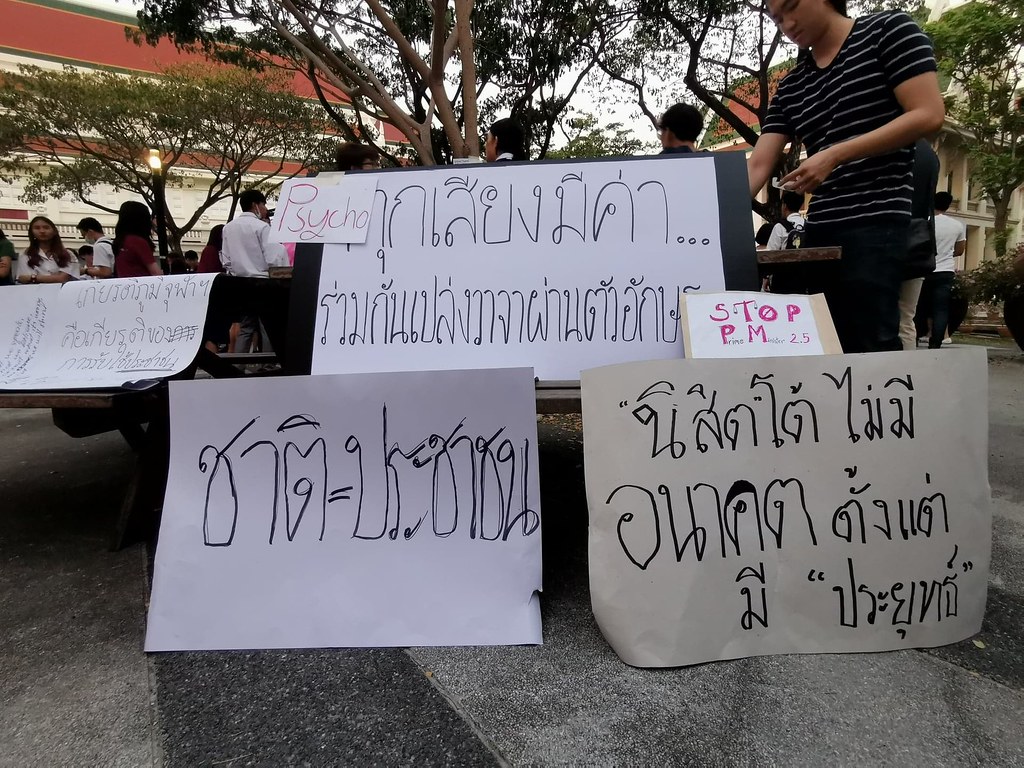 The signs that were placed at the protest. The two in front said "Nation = people" and "Students shot back: our future has been gone since Prayut came in." 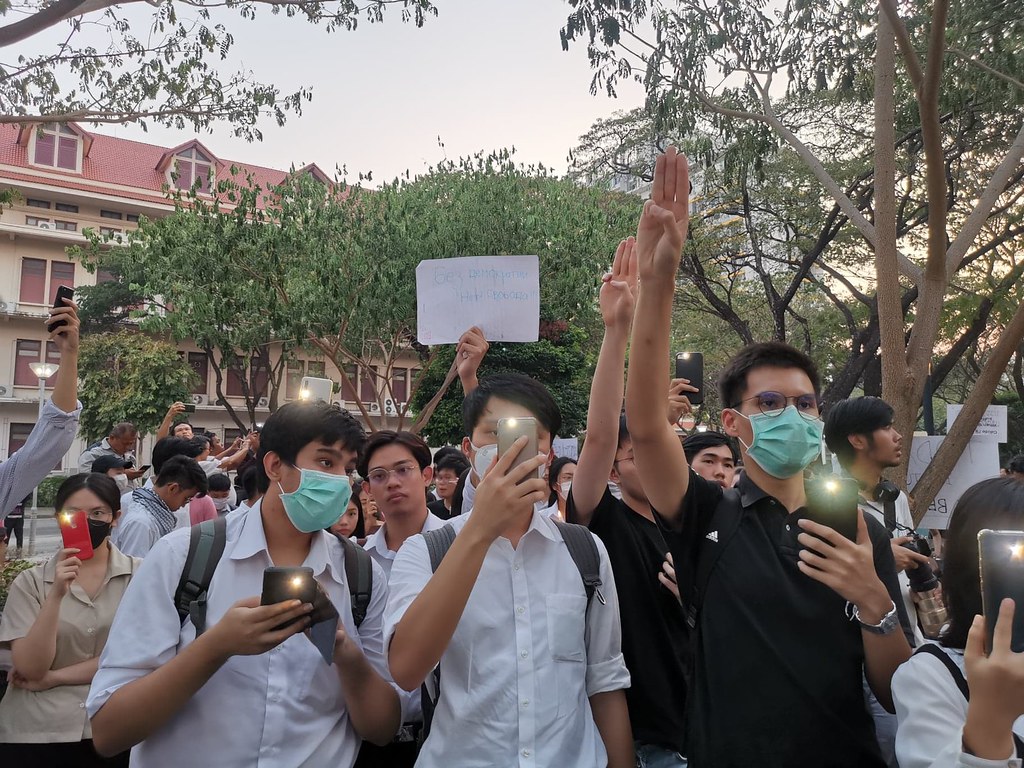 Students do the three-finger salute, while turning on their phones' flashlight towards the end of the protest. 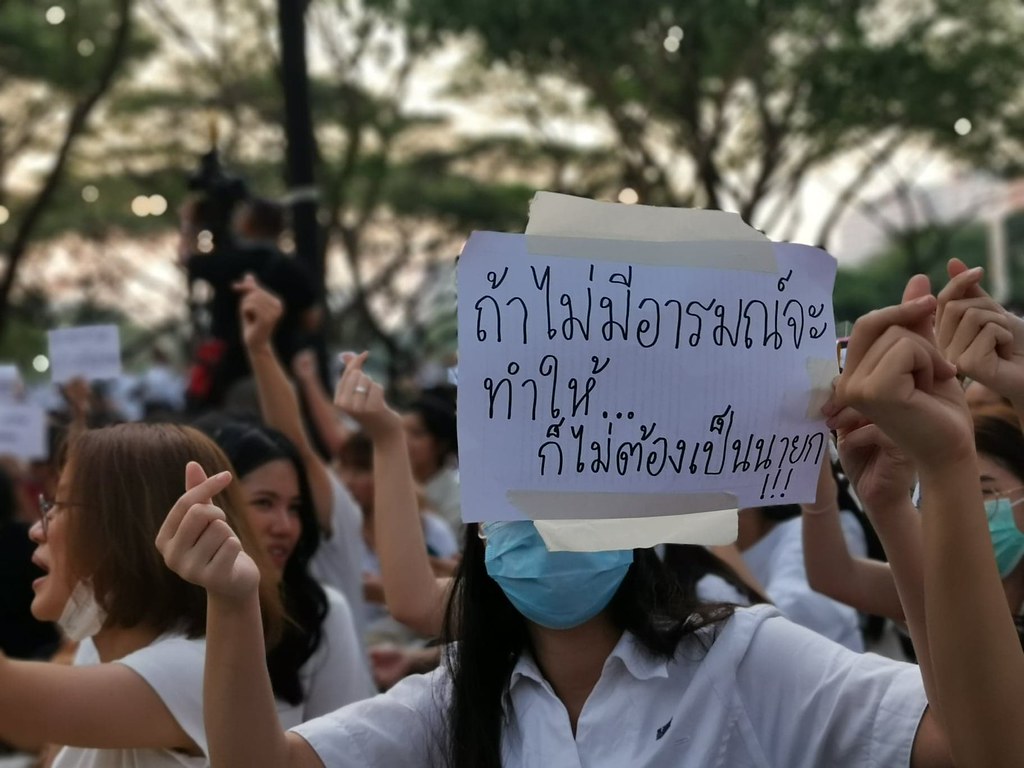 A student doing the 'mini-heart' and holding up a sign saying "if you don't feel like it, then don't be a prime minister." 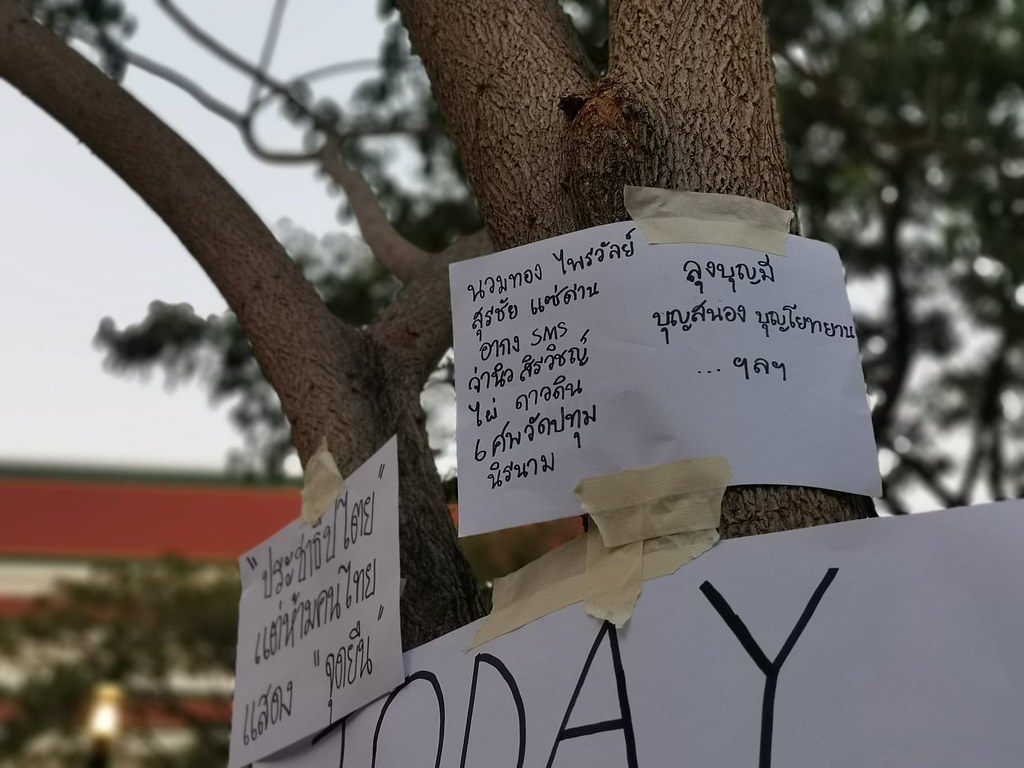 A sign taped to a tree in the protest area has the names of those effected by the cruelty of the regime written on it, including Surachai Sae-dan (Surachai Danwattananusorn), Ah-Gong SMS (SMS Grandpa -- a prisoner in an Article 112 case who died in prison), activist Sirawit Serithiwat, Jatupat "Pai Dao Din" Boonpattararaksa, Twitter user "Niranam," and the 6 people who died in the Pathum Wanaram Temple during the May 2010 crackdown. 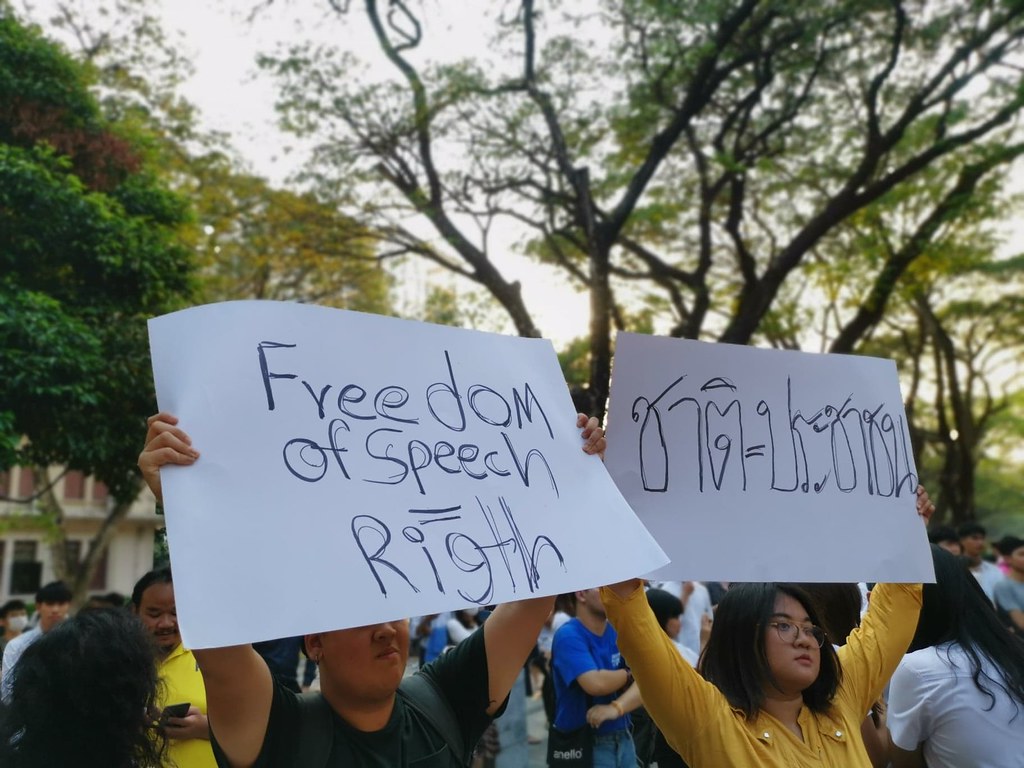 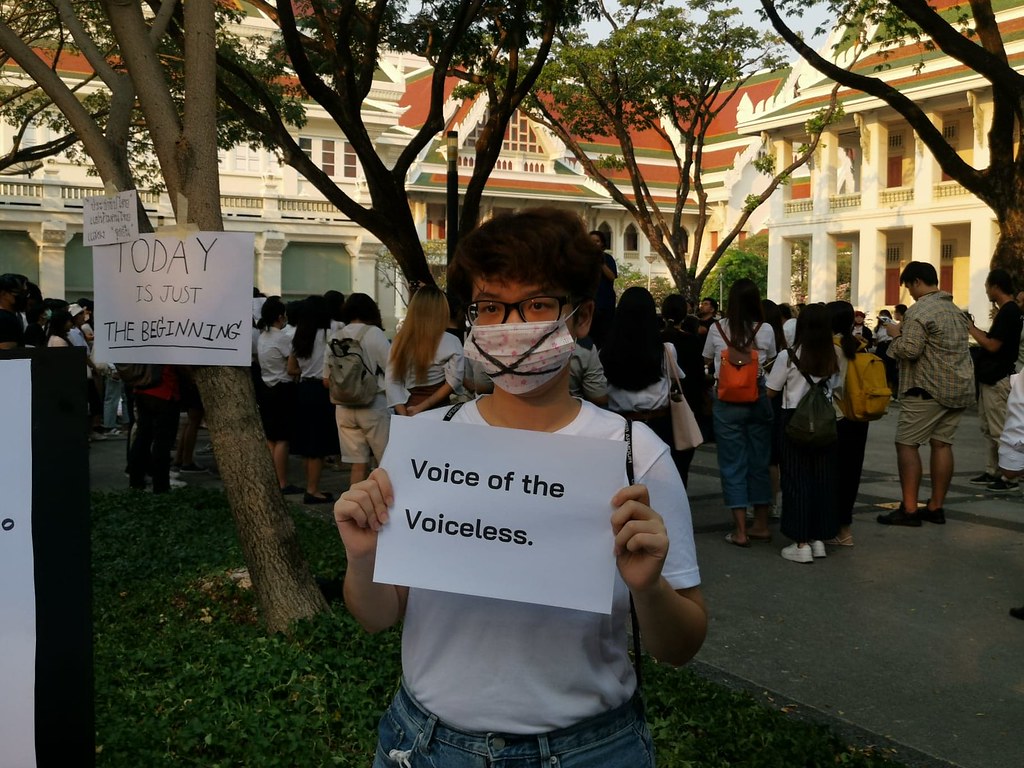 A student wearing a face mask with a cross over her mouth and holding a sign saying "voice of the voiceless." 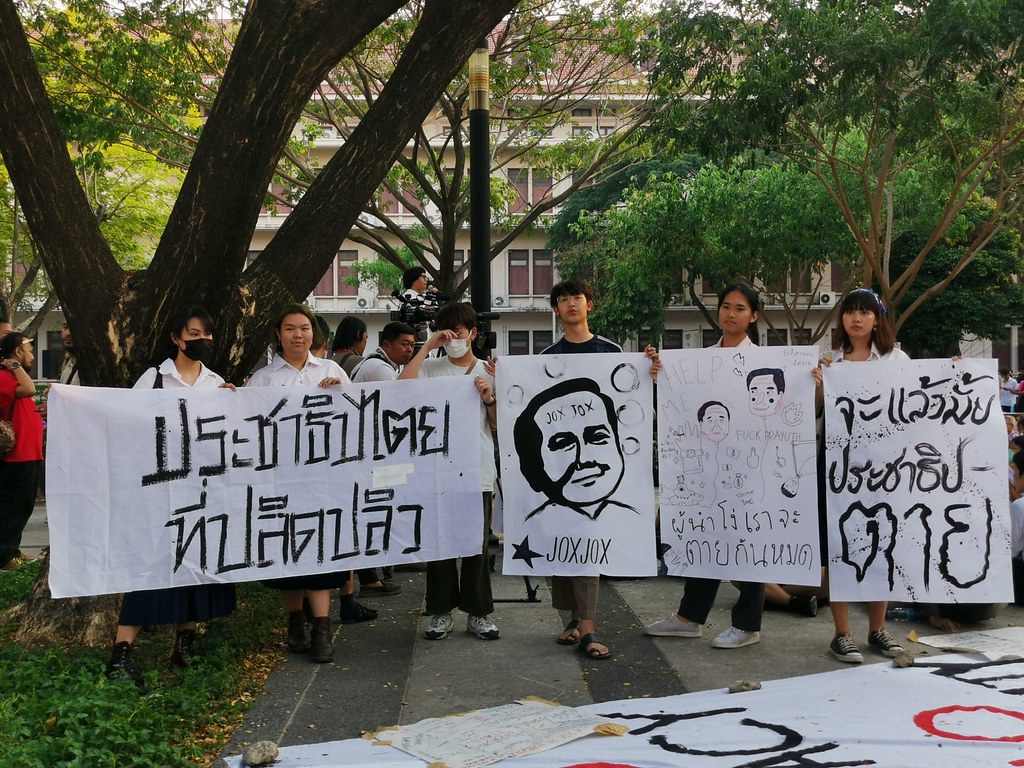 A group of students with their protest signs, one of them saying "if the leader is stupid, we're all going to die." 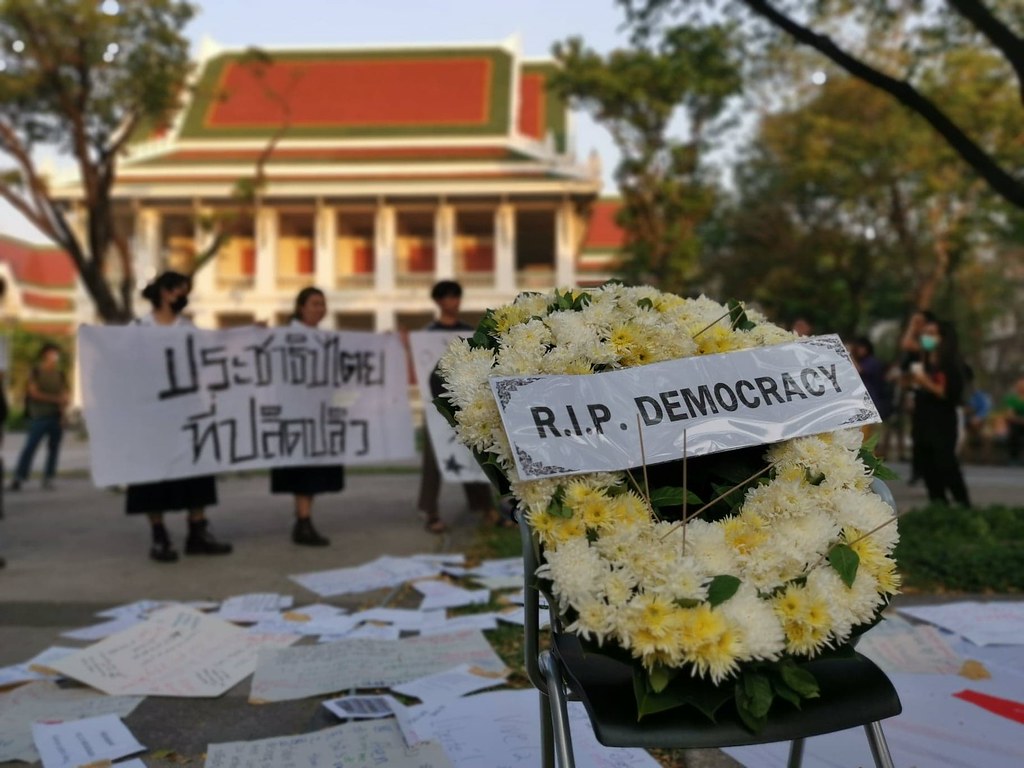 The "R.I.P Democracy" wreath from the demonstration at the Faculty of Arts during the day had been moved to the evening protest. 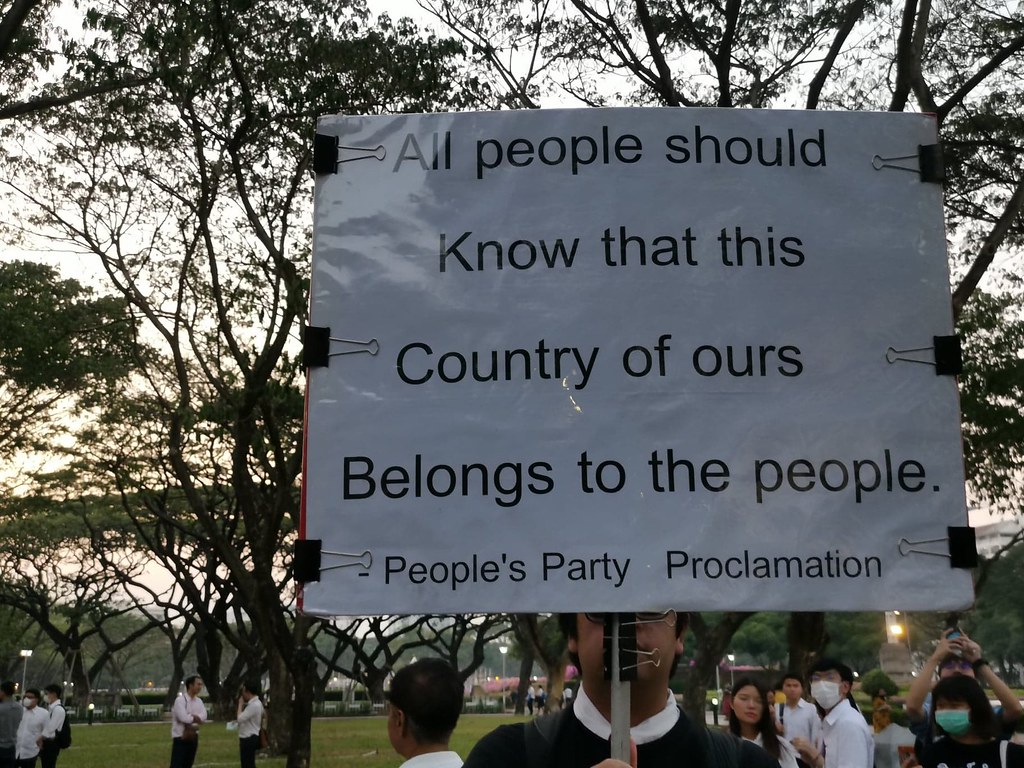 A protestor's sign quoted from the 1st People's Party Proclamation after the 1932 revolution. 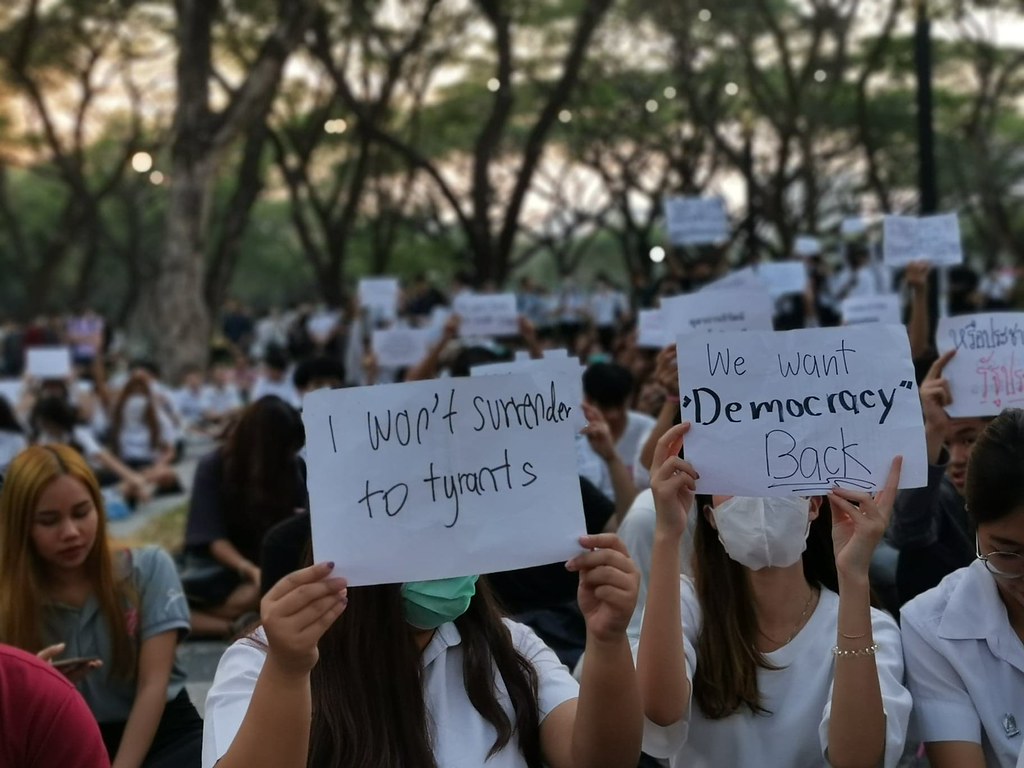 Two students with signs saying "I won't surrender to tyrants" and "We want democracy back."

Students singing "Do You Hear the People Sing?" while lighting candles or turning on their phones' flashlight before the demonstration concluded.

Students singing Chiranan Pitpreecha's "Flowers Will Bloom" during the demonstration on Monday. Chiranan, an alumni of the Faculty of Science, Chulalongkorn University, is a writer who once fled from Bangkok into the countryside to join the Communist Party of Thailand following the 6 October 1976 Thammasat University Massacre.

Students singing Jit Phumisak's "Satarlight of Faith" during the demonstration

A similar protest is simultaneously taking place at Kasetsart University, and student demonstrations are breaking out in universities across the country following the dissolution of the Future Forward Party on Friday (21 February). More protests are being planned for the week, with at least 14 taking place in different institutions across the country on Wednesday (26 February).