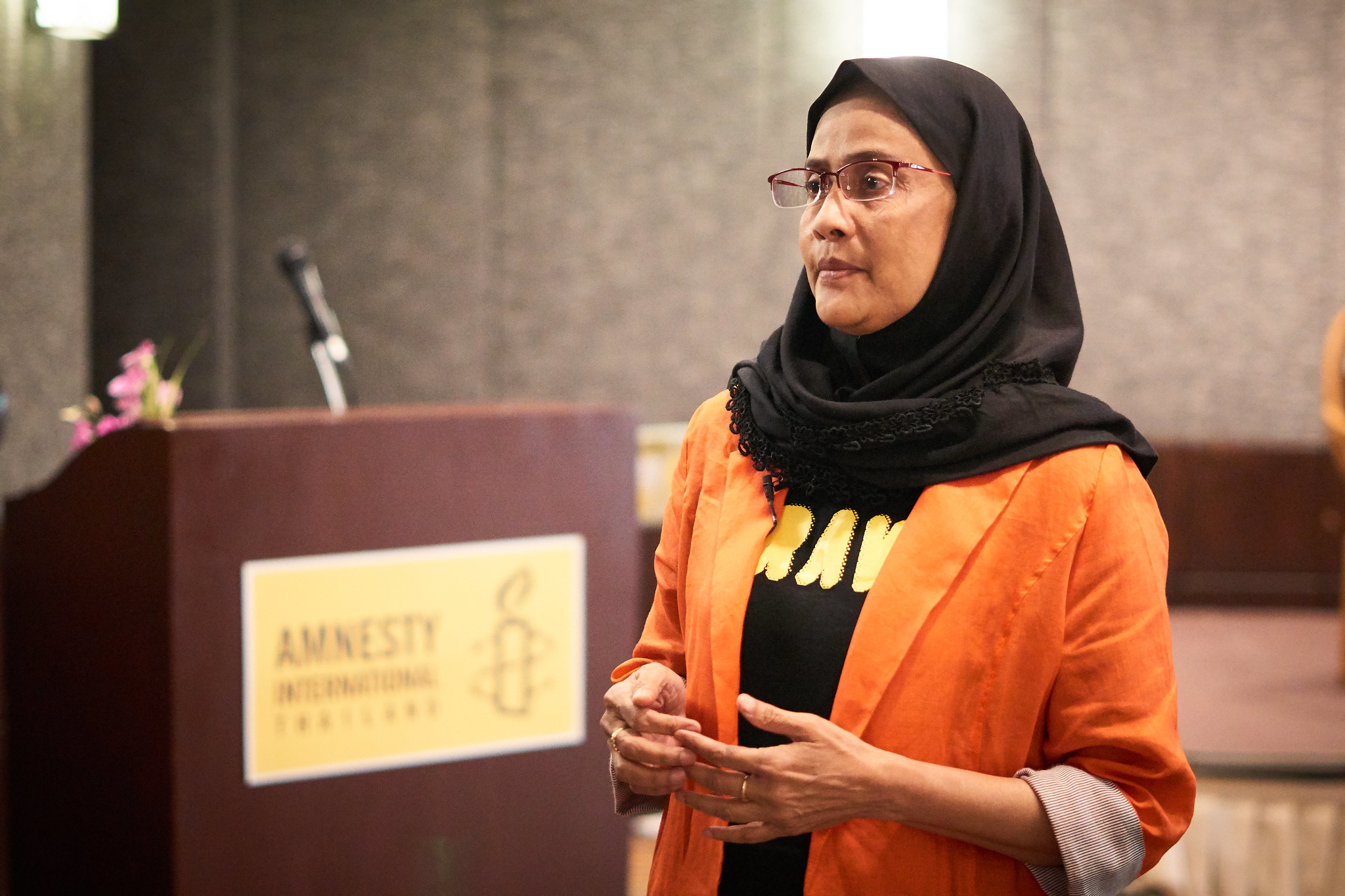 “This action by Thammakaset is a textbook case of how defamation laws are used in Thailand to silence human rights defenders.  It is clearly without any legitimate basis, and intended to harass and intimidate Khun Angkhana, who is a leading champion of human rights in Thailand and the region,” said Frederick Rawski, ICJ Asia Pacific Regional Director. “We hope that the Courts will dismiss this frivolous case at first opportunity.”

On 25 October 2019, Thammakaset Co. Ltd., a poultry farm in Lopburi Province, filed a criminal defamation suit under sections 326 and 328 of the Criminal Code against Angkhana Neelapaijit for two posts she shared that contained links to press statements of 16 organizations, including the ICJ, and Fortify Rights.

The statements cited in the warrant as the basis for the action were a post on 3 December 2018 in which Angkhana Neelapaijit re-tweeted an ICJ link to a joint statement co-signed by 16 organizations, including the ICJ. The statement contained a link (now defunct) to a short film in which former employees spoke out about alleged labor abuses; and a post on 28 June 2019 which included a link to a Fortify Rights’ news release containing the same link.  The film refers to a previous defamation complaint brought by Thammakaset against 14 of its former workers, and called upon the authorities to drop criminal defamation charges against them and decriminalize defamation in Thailand. Thammakaset claimed that the film was defamatory.

Thailand is party to the International Covenant on Civil and Political Rights (ICCPR), which guarantees the right to freedom of expression. The UN Human Rights Committee, the supervisory body that provides the authoritative interpretation of the ICCPR, has called on States that criminalize defamation to abolish criminal defamation laws and reserve defamation for civil liability.

“The criminal defamation provisions in the Criminal Code have been repeatedly invoked for nefarious ends, such to target persons seeking to bring public attention to human rights violations, including by business enterprises. They need to be removed from the Criminal Code as a matter of urgency,” said Rawski.  “The imposition of criminal penalties for speech, even allegedly defamatory speech, is disproportionate and risks having a ‘chilling effect’ on the exercise of freedom of expression.”

Angkhana Neelapaijit is a Thai human rights defender and the wife of human rights lawyer Somchai Neelapaijit, who was abducted more than 15 years ago. His abduction was the only case of enforced disappearance to ever be tried in a Thai court. In 2015, she was appointed commissioner of the National Human Rights Commission of Thailand, before resigning in July 2019, and is a recipient of the 2019 Ramon Magsaysay Awards.

A court warrant was sent to Angkhana Neelapaijit on 23 November 2019. A conciliation conference, at which parties are brought together to settle a dispute before trial, is scheduled to be held on 12 February 2020 at Bangkok South Criminal Court.

The ICJ has repeatedly expressed concerns about the use of existing defamation laws to harass human rights defenders, activists, lawyers, academics, and journalists in Thailand, for carrying out their legitimate and important work to raise awareness and highlight human rights issues.

This case is one of many defamation and other cases brought by Thammakaset against any individuals perceived to have expressed dissent, conducted advocacy on or released information relating to labour rights violations committed by the Company. According to the International Federation for Human Rights (FIDH) and World Organisation Against Torture (OMCT), as of May 2019, Thammakaset has filed complaints with the police, the Criminal Court, and the Civil Court against at least 22 individuals in at least 14 cases.

These included criminal defamation complaints against Sutharee Wannasiri, human rights defender and a former Thailand Human Rights Specialist with Fortify Rights, for three comments she was alleged to have made on Twitter related to the same film produced by Fortify Rights; Ngamsuk Rattanasatiean, who had shared information on the Facebook page of the Institute of Human Rights and Peace Studies; Suchanee Rungmuanporn, a reporter from Voice TV who had made a post on Twitter highlighting labour rights violations by Thammakaset; Suthasinee Kaewleklai, coordinator of the Migrant Workers Rights Network, who had shared information on Facebook relating to the cases; and other separate cases against 14 migrant workers and former employees.