Manushya Foundation (MF), Isaan Land Reform Network (ILRN), and the Future Forward Party (FWP) call on Thai authorities to stop the misuse of forest conservation laws and policies to criminalise impoverished villagers, to drop all charges against the 14 villagers of Sab Wai village, and to protect their rights related to land and livelihood. 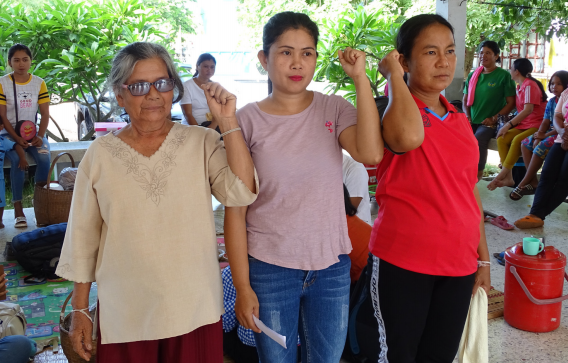 19 June 2019, Chaiyaphum Province – Yesterday, Manushya Foundation, Isaan Land Reform Network, and members of the Future Forward Party (FWP) monitored the proceedings of the Chaiyaphum Provincial Court. In an appeal before the Court, Ms. Sakl Prakit was given a very heavy sentence of 4 years in prison, with the fine increased from 900,000 THB to 1,587,211 THB. The Court also ordered Mrs. Sakl and her family to be evicted from land that they have been living and farming on for generations, long before the government classified it as part of the Sai Thong National Park.

- Download the English version of the News Release here.

- Download the Thai version of the News Release here.

Mrs. Sakl Prakit and 13 other Sab Wai villagers, 8 women and 5 men, were charged by authorities of the Sai Thong National Park using the forest reclamation policy passed by the military junta’s National Council for Peace and Order (NCPO), including the Forest Mastery Plan, NCPO Order 64/2014, and NCPO Order 66/2014.

Using sustainable development, protection of forests, and increase of forest cover as a justification; the government enforces the policy developed in 2014 to target local farming communities instead of large-scale investors. “The National Park authorities approached our families and forced them to sign documents, giving all our lands to them.”says Narisara Muangklang, one of the 14 villagers facing charges. “They told our families that if they did not sign the documents, they could not continue using the land for farming and would be charged by the Court, but now they are using these signed documents against us, as evidence to send all of us to jail.”​

Of the 14 land rights defenders facing charges, in addition to Ms. Sakl Prakit sentenced yesterday on 18 June 2019, the Chaiyaphum Provincial Court on 15 May and 5 June 2019 unfairly sentenced Ms. Nittaya Muangklang to 12 months in jail and 190,000THB fine; on 4 June sentenced Ms. Seenuan Phasang, elderly of 60-year old, to 5 month 10 days in jail and 150,000 THB fine; and on 12 June unfairly sentenced Ms. Sunee Nalin, elderly of 71-year old, to 5 months 10 days in jail and 439,027 THB fine, Ms. Pattama Komet to 8 months in jail and 200,000 THB fine, and Ms. Suphaphorn Seesuk to 5 months 10 days jail time and 381,010 THB fine as payment of damages for destroying the forest under the Forest Act B.E. 2484, the National Reserved Forests Act B.E. 2507, and the National Park Act B.E. 2504. The other 8 villagers will also receive the verdict of the appeal court before 3 July, and they could face a similar fate, further placing all of them in a situation of poverty, with all their rights to be taken away from them, leaving children and families behind. Tai Oranuch, Coordinator of the Isaan Land Reform Network (ILRN) that works with other farming communities that are also victims to the misuse of these laws, stresses “This wrong application of the forest conservation and national park law and policy against the 14 villagers is only the first of many cases in Thailand that have been filed against local communities.” She adds “This violates the rights of poor people to use their land and to manage natural resources that they depend on for their livelihood.”

Emilie Pradichit, Founder & Director of Manushya Foundation, underlines that “Local communities must not be treated as criminals and evicted from their land. They are caretakers of the forest, they do not destroy it. Together with the Future Forward party, the Isaan Land Reform Network (ILRN) and the villagers, we will continue to join forces by monitoring the cases before the Court and by finding sustainable solutions to guarantee the fundamental rights of the local communities are protected, including their right to life, livelihood and right to due process”.

Since 2016, efforts have been made by the community members to engage with the Chaiyaphum provincial authorities constructively in order to resolve this issue. However, it may be noted that till date no solution has been reached. In this situation, Apichat Sirisoontorn, Member of Parliament for Future Forward Party provides the support of his party that has established a Committee to work on land rights by stating that, “It is important to find a solution in this case at the earliest, and the Committee on land rights will work towards it. We will join local communities and supporters in their efforts to bring a change in this policy being applied unfairly, that affects their land and their lives”.

With consideration to these efforts necessary to address the damaging effect of legislations that have harmed local communities in Thailand and land rights defenders in Sab Wai village, Manushya Foundation, the Isaan Land Reform Network, and the Future Forward Party call on the Thai government and National Park Authorities to ensure the provision of justice to the 14 villagers and to:

To learn more about the 14 land rights defenders, check their profiles here:

Manushya Foundation is an Asia regional organisation aiming at empowering local communities to put them at the heart of decision making processes that concern them, to advance human rights, social justice and peace. Manushya Foundation serves as a bridge to engage, mobilise, and empower agents of change by: connecting humans through inclusive coalition building and; by developing strategies focused at placing local communities’ voices in the centre of human rights advocacy and domestic implementation of international human rights obligations and standards. Manushya Foundation strengthens the solidarity and capacity of communities and grassroots to ensure they can constructively raise their own concerns and provide solutions in order to improve their livelihoods and the human rights situation on the ground.

Isaan Land Reform Network is a community network and movement established to assist community members access their land related rights. ILRN achieves this by raising awareness of communities on the negative effects of domestic legislations and how they can impact the land related rights, life and livelihood of communities. ILRN and communities work together to initiate sustainable land and natural resource management plans through community participation, in order to emphasise the principle of
coexistence between individuals and the forest. ILRN promotes community rights on participatory resource management, environmentally-friendly agricultural practices, integrated farming practices, and biodiversity and forest expansion. ILRN also assists communities in guaranteeing their food security, by organising various farming activities.

About the Future Forward Party (FWP)

Future Forward Party was founded by Thanathorn Juangroongruangkit, former Vice-President of Thai Summit Group and Piyabutr Saengkanokkul, Assistant Professor at the Faculty of Law, Thammasat University. Thanathorn, Piyabutr, and other 24 founding members filed for the creation of Future Forward Party, with the Election Commission of Thailand on 15th March 2018. The Future Forward Party is the Third largest political party in Thailand and reassures Thai people that it is possible for the country to return to democracy after a decade-long crisis. By building a completely new political party based on a new model of politics, the party aims to inspire the Thai people that democracy is the right solution and that an alternative political model is possible. Political conflict is a common occurrence of a democratic society which urges its people to learn and find solutions collectively. Future Forward Party is offering a hopeful alternative for a more transparent political life, a return to democracy and a commitment to rebuild political consensus.