A number of Future Forward MPs revealed in a press conference today that they have been offered 30 – 120 million baht each to vote for Gen Prayut Chan-o-cha as Prime Minister. 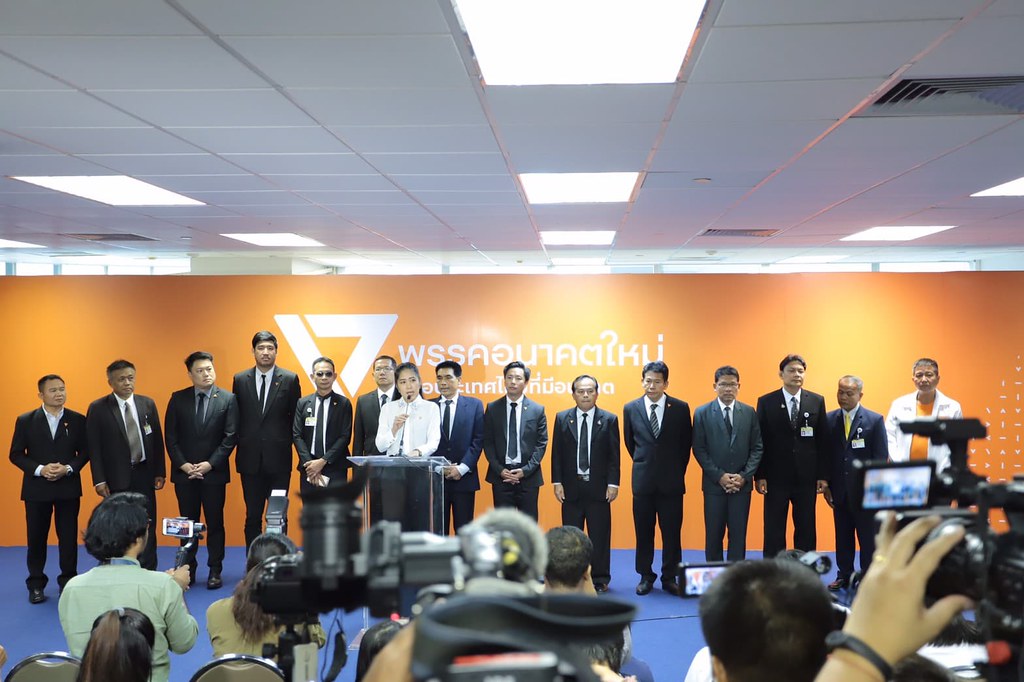 On Tuesday (4 June), FFP spokesperson Pannika Wanich and 13 other FFP MPs held a press conference to disclose attempts to turn FFP MPs into ‘cobras’ – a term used in Thai politics to refer to politicians who are lured into defecting from their party to join another coalition by being offered some kind of incentive.

Pannika said that almost every FFP MP has been offered such a deal. She said that MPs were offered money, positions, and other incentives. Some MPs were told that the party would soon be dissolved, or that their party leader would soon receive a prison sentence, and therefore they need to move to another party. Some were even threatened.

Because of the threats made against some MPs, Pannika said that she cannot reveal the identity of those making the offers, nor the evidence, to the press.

Four MPs spoke on the offers they’ve received. Pathum Thani MP Anawin Rattanastaporn said that he was approached twice. He was first offered 30 million baht; 25 million to be paid first and another 5 million to be paid after the PM vote. He turned it down. They doubled the price.

Bangkok MP Taopiphop Limjittrakorn said he was contacted within a week of the election through his acquaintances. He was offered 30 million baht, which he turned down. After he refused the first offer, the amount kept increasing. Just last week, he was allegedly offered 120 million baht.

“I wonder where they get the money from, or from whom. I turned it down because I think that being here, representing the people, we are carrying their hope. I asked myself: how much is democracy worth? I would like to tell those making the offers that democracy is priceless. The people’s trust is definitely worth more than 120 million,” said Taopiphop.

Taopiphop has long campaigned for liberalization of the Thai law that permits only state-registered breweries and brewpubs.  He was arrested and fined in 2017 for brewing craft beer in his own home.  The giant companies that currently dominate the beer market stand to lose millions of baht in revenue from any liberalization of the law.

Khon Kaen MP Thitinan Saengnak said attempts to get him to defect began before the election. An individual told that there wouldn’t be an election on 24 February, and that if he wanted to be a politician, he should send his profile to that person, who would speak to a senior figure on his behalf. The day after the election on 24 March, he received a phone call saying that a senior figure would like to meet him. Thitinan said the caller claimed that this senior figure is the deputy leader of a political party. He refused to meet them, because at that time the ECT had yet to endorse the election result, and because his party told him not to speak to the press. He was finally offered money: 5 million baht to be paid before the PM vote and 70 million after, along with a salary of 200,000 baht.

Samut Sakhon MP Tongdaeng Benjapak also said he received several offers, starting from 25 million and eventually rising to 75 million, all of which he turned down.

“You contacted us many times. Every time, it hasn’t worked. We ask you to stop, so that we can use that time to work for the people, and so that you, too, can work for the people,” said Pannika. She insisted that FFP has no defectors, and said that, if any FFP MP votes for Gen Prayut, the party would ask that MP to resign from the party so they can join another party which shares their ideology.

The vote for Prime Minister is scheduled to take place on Wednesday (5 June). FFP and the democratic coalition will nominate FFP party leader Thanathorn Juangroongruangkit, whose MP status is currently suspended following an order from the Constitutional Court, while Phalang Pracharat and the other six parties in the pro-junta coalition will nominate Gen Prayut. However, the vote may not conclude tomorrow, as Chuan Leekpai, the House Speaker, has said that he would give MPs as much time as they want. He also said that both PM nominees may appear and speak in parliament. Thanathorn confirmed in another press conference later on Tuesday that he is ready to speak, while Gen Prayut said that he will not be present during the PM vote.