Home » The fight for love: LGBTQ rights policies in the 2019 general election

The fight for love: LGBTQ rights policies in the 2019 general election

Thailand tries to present itself as an LGBTQ-friendly nation. The Tourism Authority of Thailand’s campaign “Go Thai, Be Free” shows a gay couple chasing each other across a beautiful beach, and a lesbian couple getting married, while the country has no real legal recognition or support for the LGBT community. The slogan “in Thailand, we believe diversity is amazing” still rings false when same-sex couples cannot legally marry or adopt children together, and transgender people cannot change their titles to match their gender identity, or even dress according to their gender identity in schools, universities, and workplaces.

But Thailand is due to have a general election on 24 March, only 18 days from now. This election is the first since the 2014 military coup, and now, at the height of campaigning, it seems that LGBTQ rights are on the agenda of many political parties. Party representatives are presenting their LGBTQ rights policy on various platforms, including debate shows, and representatives of quite a few parties even attended the Chiang Mai Pride festival, which was held on 21 February 2019. 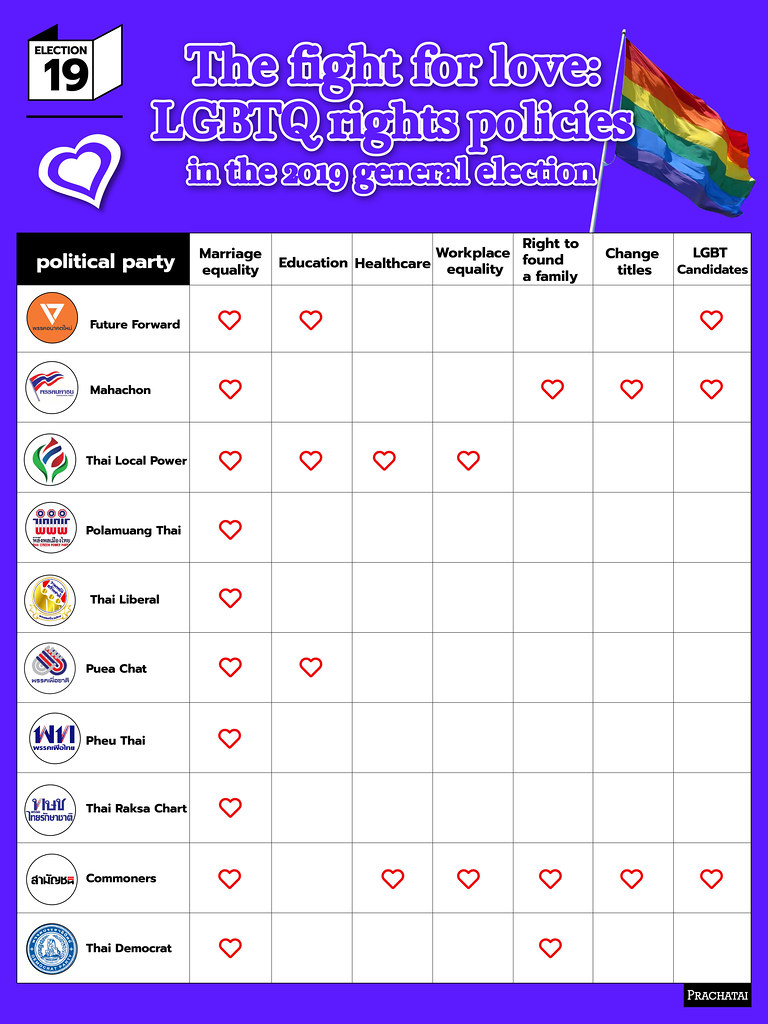 In this election, the Future Forward Party has said that it will be pushing for an amendment to Article 1448 in the Commercial and Civil Code, so that the definition of marriage is between two persons instead of being between a man and a woman. Tunyawaj Kamolwongwat, an FFP MP candidate, said that the draft of the Civil Partnership Act still has a few problems which need to be amended, and for everyone to be truly equal, we all need to be subject to the same law. The FFP also proposed to adjust the curriculum, so that it no longer propagates stereotypes and prejudice against the LGBTQ community, and so that young people will have the right understanding of gender, sexuality, and diversity. The FFP also proposes educating state officials who work with the LGBTQ community and educating the public. Tunyawaj said that education is important, as the LGBTQ community often faces problems being themselves, which is a serious issue, often leading to self-harm.

The Mahachon Party is presenting a “Diversity is Thailand’s Pride” campaign, proposing that gender, racial, and ethnic diversity is Thailand’s pride. The party proposes legal recognition and protection, both in terms of law and policy, and to focus on identity-based budgeting, such as gender responsive budgeting, to guarantee that policies can be implemented. As for LGBTQ rights, the Mahachon Party is fighting for the right to found a family, and will propose an equal marriage law which will allow same-sex couples to adopt children together, and to use assisted reproductive technology. The party is also proposing a law which will allow gender assignation to be up to each person, and to allow transgender people to change their title to match their gender identity. This is an important issue, as transgender people often face problems when their gender expression does not match the title on official documents, such as national ID cards and passports. The Mahachon Party is also proposing a “Travel with Pride” scheme, promoting the economy through diversity-friendly tourism.

The Commoners Party supports the amendment of the marriage law so that LGBTQ couples can legally marry and have equal rights to found a family, and proposes a social welfare and healthcare scheme which will support transgender people to live with dignity. The party also proposes a policy that will allow workers to take medical leave for physical and mental recuperation, and to recover from gender affirmation processes, and will increase the length of maternity leave for every gender, and for workers to be able to take leave with pay in both cases. The party hopes that these policies will reduce social and economic disparity. Chumaporn Taengkliang, one of the party founders, has also mentioned legalizing the change in titles for transgender people.

The Thai Local Power Party proposes setting up a learning centre for parents with LGBTQ children to promote understanding, and will make changes to the curriculum to make sure young people understand that being LGBTQ is normal. The party also says that it will promote the LGBTQ community’s access to their rights, such as to healthcare, insurance and employment, and will also support laws to ensure that LGBTQ couples have the same rights as heterosexual couples.

The Puea Chat Party proposes the legalization of same-sex marriage and for LGBTQ couples to have the right to inheritance, and to make medical decisions on their partner’s behalf. It also proposes to set up a learning centre to promote understanding between the LGBTQ community and those outside the community, and to set up an emergency shelter for members of the LGBTQ community who face violence or human rights violations.

The Thai Liberal Party said that the LGBTQ community should have equal rights, but only proposes to support the Civil Partnership Act and to implement this Act first. Amendment to the marriage law will have to come later.

The Pheu Thai Party supports amendment of the Commercial and Civil Code, Article 1448, while the now dissolved Thai Raksa Chart Party supports the Civil Partnership Act, but recognizes that the content of the Act needs to be scrutinized. Parit Watcharasin, from the Democrat Party, told Morning News on Channel 3 that there should be an amendment to the marriage law. Parit thinks that LGBTQ couples are denied their rights as partners, such as access to health insurance, child adoption, or to take out a loan together, but these problems can be solved by amending the Commercial and Civil Code, without needing to draft a new law.

On the long road to equality

Despite LGBTQ rights being on the agenda of many parties, there are still many parties which do not think that this is a major issue. These parties often group the LGBTQ community with other marginalized groups and present their policies in very vague terms. For example, the Polamuang Thai Party’s representative said during the Thairath debate on LGBTQ issues that the party supports state welfare for the LGBTQ community, the underprivileged, and the elderly, while maintaining Thai culture, but the party does not touch on the issues currently being discussed.

But this attitude is not dangerous, since it shows that the party acknowledges the existence of the movement for LGBTQ rights and does not show any homophobic or transphobic sentiment. On the other hand, certain parties openly oppose LGBTQ rights. For example, deputy leader Natchapol Supattana of the Thai Civilized Party said that members of the LGBTQ community have been successful in Thailand, and that Thailand is a country of freedom, so LGBTQ rights is not a national issue. Natchapol also said that attention should not be paid to issues of LGBTQ rights, or the situation could resemble the conflict in the deep south of Thailand. This attitude shows the speaker’s lack of understanding of the human rights situation in Thailand and a lack of knowledge about issues being discussed internationally. Such a statement also belittles the seriousness of the deep south conflict and paints the LGBTQ community as having the potential to turn violent. This attitude is harmful.

It is now likely that the draft of the Civil Partnership Act will not be passed by the NLA, and will have to wait until the next government. The attention paid by political parties to LGBTQ rights issues is a good sign. Many parties also have LGBTQ MP candidates, such as Thanwarin Sukapisit and Tunyawaj Kamolwongwat of the FFP and Palinee Ngarm-Pring of Mahachon. It is important that the LGBTQ community is represented in government to ensure that LGBTQ rights will be protected, but from now we can only hope that these parties will do as they have promised.