Andrew Johnson, Assistant Professor of Anthropology at Princeton University, was temporarily detained by the Thai Immigration Police upon leaving Thailand on 10 February 2019. Johnson subsequently tweeted that he was told by the police that they had a list of about thirty researchers “on society, culture, politics” and that they wanted information on where he had been and who he had talked to. 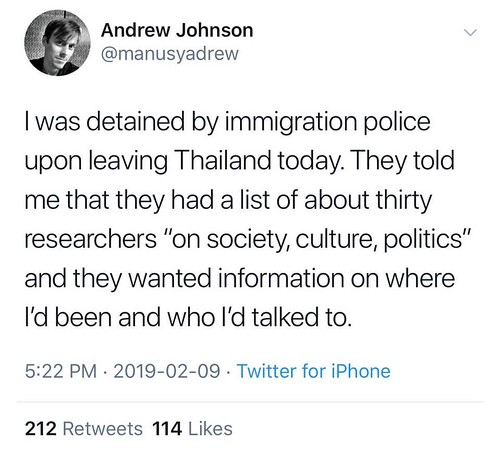 Johnson also tweeted that a friend had informed him that this is likely to do with his signing a petition supporting the four protestors from Chiang Mai University, who were charged with ‘holding unlawful political gathering’ after they were photographed at the 13th International Thai Studies Conference holding a banner stating that “an academic seminar is not a military base,” protesting the heavy-handed surveillance of the event by both uniformed and plainclothes officers. The Thai Army filed a criminal complaint against them and the conference organizer in August 2017, and all 5 were charged with violating NCPO Head Order No 3/2015 Section 12, banning political gatherings of 5 or more people. The case was later dismissed in December 2018, since NCPO Head Order No 22/2018 had already revoked the Order No 3/2015, under which the defendants were accused, meaning that the defendants’ action was no longer unlawful.

However, Johnson is hardly the first researcher harassed in this manner by the Thai authorities. Since the military coup in 2014, the military government has implemented several measures to restrict freedom of expression in order to suppress criticism of their rule, which has also affected academic freedom. Other researchers also reported being similarly kept under surveillance and questioned.

Rosenun Chesof, a lecturer at the University of Malaya, told Prachatai that she was detained by the Immigration Police 10 times. The first was on 30 August 2018, as she arrived at Hat Yai International Airport from Kuala Lumpur. The Immigration Police told her that her name is on a list of people that the Police Special Branch Division had instructed them to investigate. She said that the officer asked her if she had committed a crime, or if she had been part of a demonstration. Rosenun told them she has never done anything.

Rosenun said that her name would be flagged when passing through passport control. An officer told her that her name was on a list of members of a group of international academics campaigning for democracy in Thailand, and invited her into a room to be questioned. Rosenun said that this is how the detention always happened. She said that she has signed several petitions. The one relating to the Thai Studies Conference case is only one of them. The last time she was detained at immigration was on 5 February 2019.

“Every time I enter or leave, even through different airports, I am always asked the same questions,” Rosenun said. “After the immigration officer contacts the Police Special Branch Division and allows me to go, they usually tell me that I can enter and leave as normal, but I will normally be questioned like this because the Police Special Branch Division has sent them a list and Immigration are just the recipients and they have to follow procedures.”

“I think that this is becoming harassment to stop academics from talking or giving opinions about Thai politics, because once at Sadao, an officer himself told me that I have to understand that at this time the country is not normal. Some forms of expression may be a threat to security.” 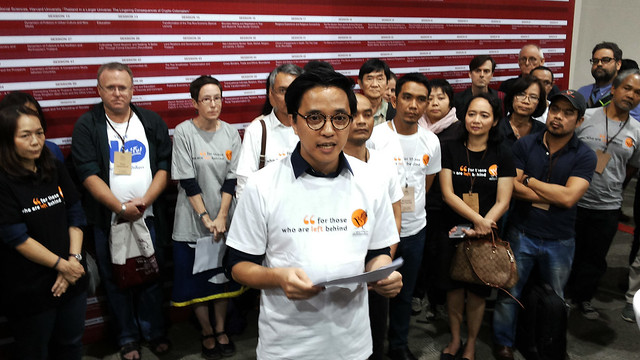 According to Thai Lawyers for Human Rights (TLHR), there are 18 petitions from academics and other sectors regarding the Thai Studies Conference case, some of which are signed by over 100 signatories, and some names appear on several petitions. Johnson, Rosenun, and Hirsch have all been signatories on one of these petitions.

Asst Prof Anusorn Unno, Dean of the Faculty of Sociology and Anthropology at Thammasat University, told Prachatai that about 40 foreign academics signed a petition against prosecuting the five protestors at the Thai Studies Conference, and it was found that their names have been flagged.

Anusorn said that being on the list affected these scholars differently. Some people were detained by Immigration and interrogated. Some got to meet the Police Special Branch. This makes traveling to and from Thailand difficult, and Thai Studies scholars are concerned that this will affect their research in Thailand if certain rights are revoked, or if researchers have their visas denied.

“What we did does not violate any law. It is not an offence under the law because signing a petition, as a way of calling for freedom of expression, academic or otherwise, is a protected right.

“It is just that recently, Thailand has not been a legal state with the rule of law. Those in power have been using this way to persecute those who have different ideas or who dissent, but in fact legally there is nothing they can do,” Anusorn said.

He also said that there is a network of scholars working to collect information about the matter, and they are planning to request the related organizations to disclose the list and to explain why they have flagged these particular names.