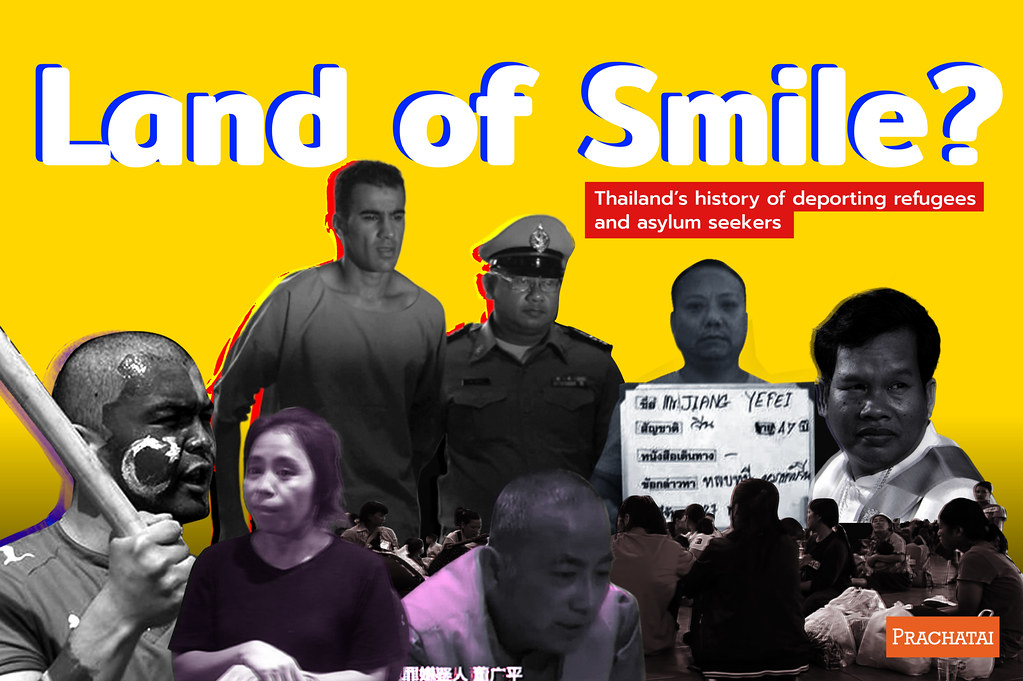 On 7 January 2019, after the Thai authorities had a change of heart in regards to the 18-year-old Saudi asylum-seeker Rahaf Mohammed al-Qunun, Maj Gen Surachate Hakparn, the Thai Immigration Police chief, told reporters: “Thailand is the Land of Smiles. We will not send anyone to die.”

However, since the military government came into power in 2014, this so-called “Land of Smiles” has already repatriated a number of refugees and asylum seekers to countries where they are likely to face persecution, torture, or other serious human rights violations. Thailand has on many occasions been the subject of international criticism for its lack of respect for human rights principles and customary international law.

Thailand has not ratified the 1951 Convention Relating to the Status of Refugees, but it is a party to the Convention against Torture and Other Cruel, Inhuman or Degrading Treating or Punishment, Article 3 of which explicitly states that “no State Party shall expel, return ("refouler") or extradite a person to another State where there are substantial grounds for believing that he would be in danger of being subjected to torture,” a legally binding principle which it has long failed to respect.

Human Rights Watch (HRW) reported that despite having repeatedly expressed a commitment to protect refugees, “in recent years, Thai authorities have forcibly returned refugees, asylum seekers, and others based on the requests of foreign governments, despite the credible risk of torture or other grave human rights abuses.” HRW also reported that Thailand often arbitrarily and, in most cases, indefinitely detained refugees, asylum seekers, and other migrants. Currently, Thailand also lacks a legal framework to assess asylum claims and fails to provide formal legal status to refugees in the country, heightening the risk of other human rights violations, including arbitrary and indefinite detention, refoulement, and human trafficking.

Thailand has now twice been under the international spotlight for its treatment of refugees and asylum seekers since the start of 2019, first with the case of Rahaf, and then once more when the Thai authorities detained and threatened to extradite footballer and refugee Hakeem al-Araibi. Formerly a member of the Bahraini national football team, Hakeem has been openly critical of the Bahraini government and fled the country in 2014, seeking asylum in Australia. The Thai authorities claimed they were acting on an Interpol red notice issued in spite of Hakeem’s refugee status, and a formal request from the Bahraini government. Both cases caused an international scandal since their deportation would have been in breach of the principle of non-refoulement, and for Hakeem, it was clear that the Bahraini authorities have political motivations in wanting him returned to Bahrain, prompting an international social media campaigns and appeals from human rights groups and international organizations. Rahaf was allowed to meet representatives from the UNHCR and has since been resettled in Canada, while Hakeem was released from Bangkok Remand Prison on 11 February and has since returned to Australia – both a small victory for human rights.

However, others have not been as lucky. Here is a list of refugees and asylum seekers Thailand repatriated since the 2014 military coup. Their fate remains unknown. 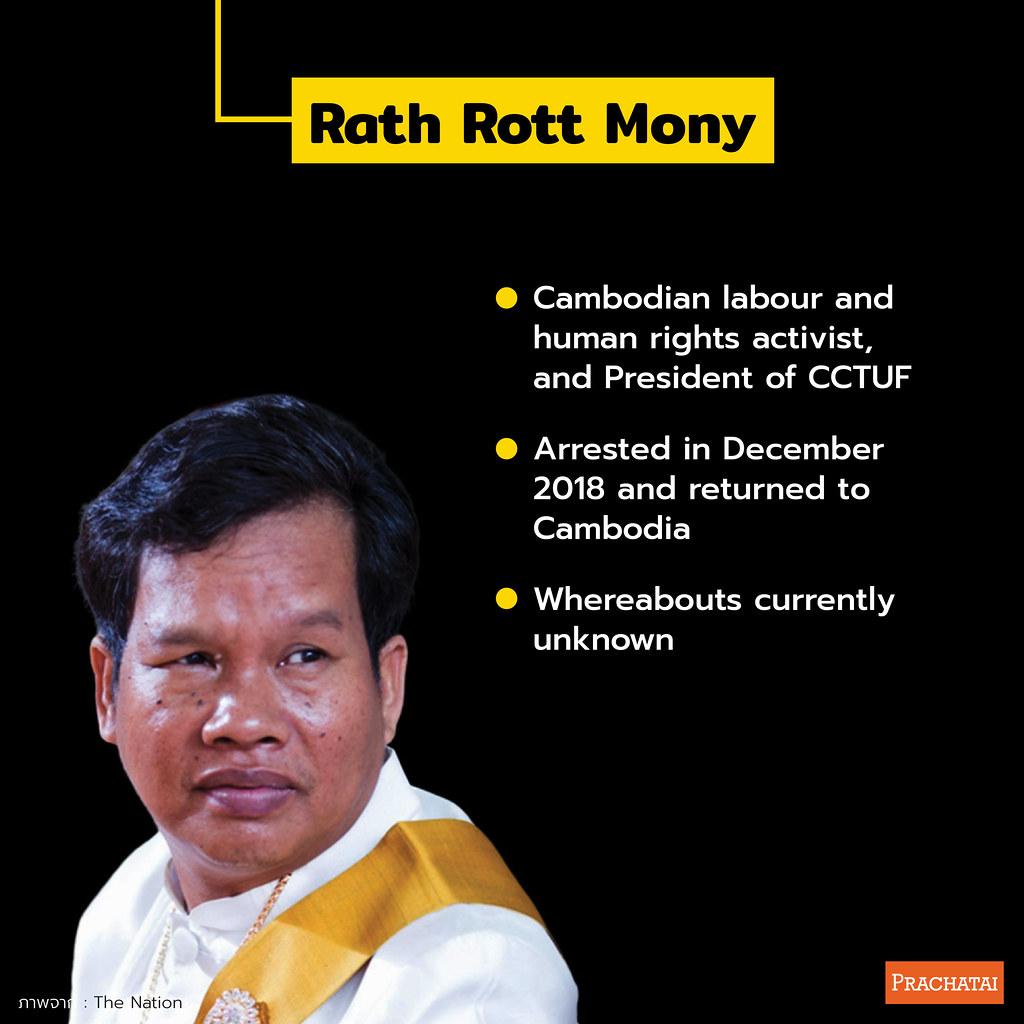 A Cambodian labour and human rights activist and the President of the Cambodian Construction Workers Trade Union Federation (CCTUF), Rath Rott Mony was wanted by the Cambodian government for his role in the making of a documentary titled “My Mother Sold Me: Cambodia, Where Virginity is a Commodity.” The documentary included accounts of poor girls sold into sex work, and the Cambodian authorities have accused the producers of paying the girls and their mothers to lie on camera to harm the country’s reputation. Based on a formal request by the Cambodian government, the Thai authorities arrested Mony on 7 December 2018, and he was subsequently sent back to Cambodia. Sunai Phasuk, senior researcher for HRW’s Asia Division, said that his extradition did not go through the proper legal processes. The extradition was not decided in court, and Mony was not allowed to see a lawyer. He was likely to face an unfair trial and other human rights violations in Cambodian custody. His whereabouts are currently unknown. 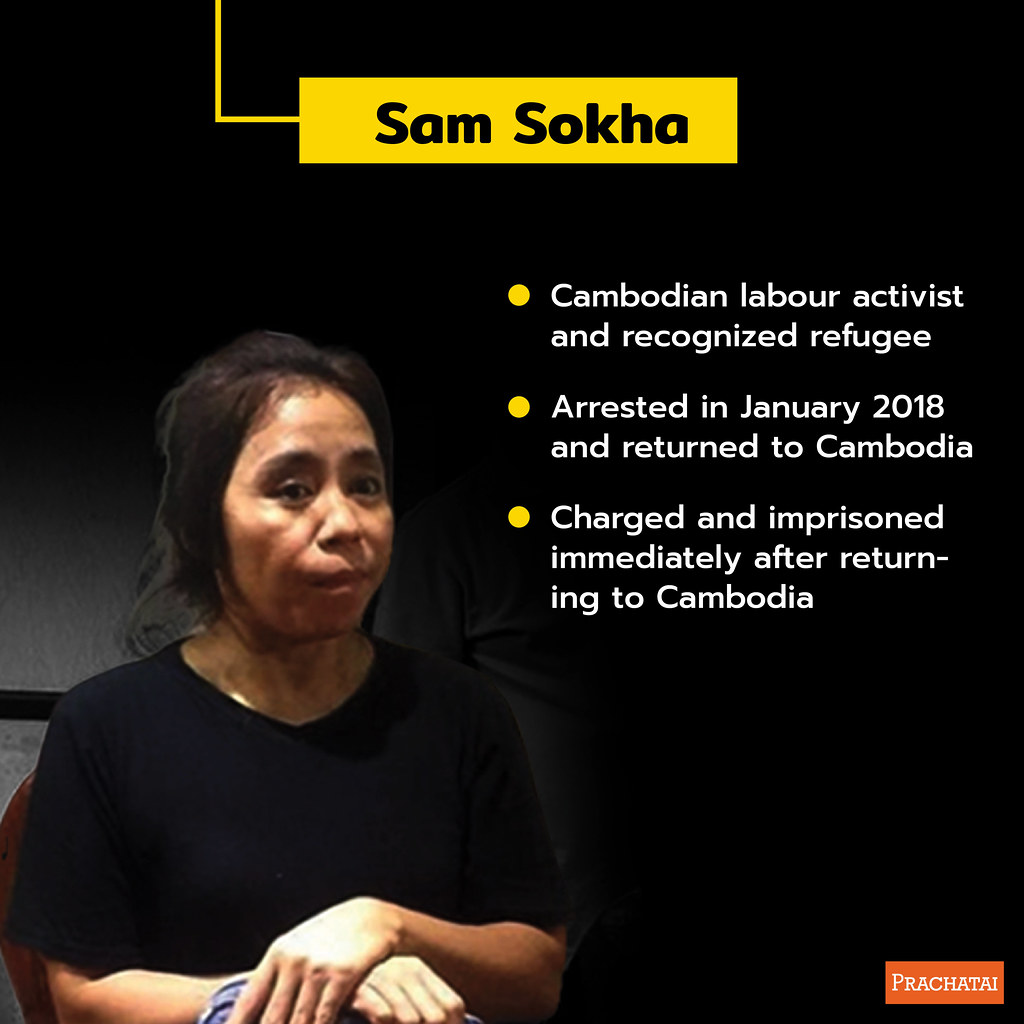 Cambodian labour activist Sam Sokha was wanted by the Cambodian authorities for throwing shoes at portraits of Hun Sen and Heng Samrin. She fled to Thailand and was arrested on 5 January 2018. She was deported on 8 February 2018, a little more than a month after her arrest, despite the fact that she is a refugee under the protection of the UNHCR and concerns for her safety. Her lawyer had also appealed against her conviction for illegal entry and tried to add to the investigation report that she refused to return to Cambodia, but to no avail. She was convicted in absentia of “insult of a public official” and “incitement to discriminate”, and was imprisoned immediately after her return to Cambodia.

The Thai authorities have frequently collaborated with the Cambodian government to harass, arrest, and forcibly return exiled dissidents – including opposition politicians, human rights activists, and journalists – who fled to Thailand to escape persecution by the Cambodian government under Prime Minister Hun Sen. The deportation of Sam Sokha and Mony raised concerns among various human rights organizations about the situation for asylum seekers in Thailand, since they were likely to face serious human rights violations in Cambodia. There are also concerns that Hun Sen and the Thai military government have covertly made a deal to exchange political refugees. 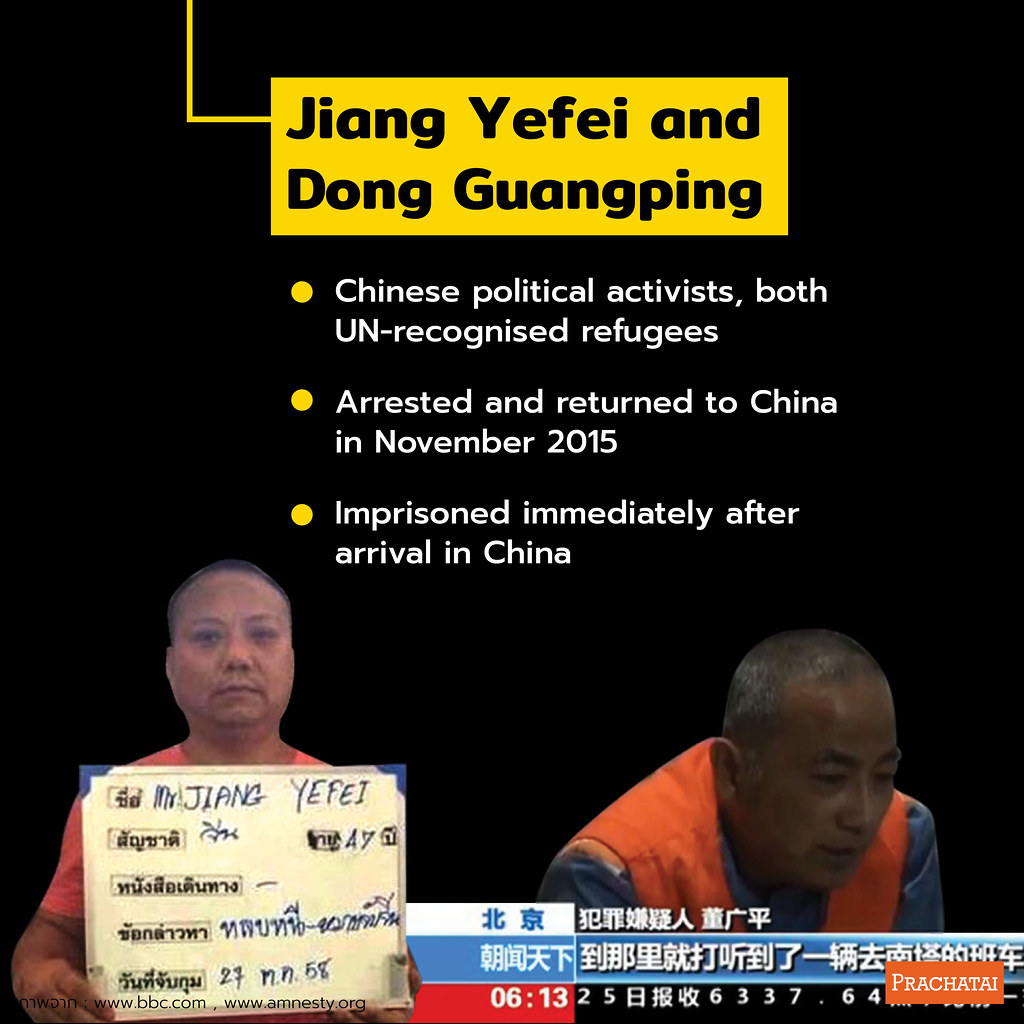 Political cartoonist Jiang Yefei and former police officer turned human rights activist Dong Guangping both fled China to seek asylum in Thailand. According to Amnesty International, Jiang Yefei was detained and tortured by Chinese authorities after participating in an alternative “human rights torch” relay in advance of the Beijing Summer Olympics. After he was released and heard reports of plans to re-arrest him, he fled to Thailand to seek refugee status. Dong Guangping was a former police officer in China who criticized the Chinese government. His activism led to his arrest in 2000 and three years’ imprisonment. Fearful that he would be re-arrested again, he also arrived Thailand as an asylum seeker.

In 2015, the Thai government arrested them on immigration charges. AI reported that while in detention, both were recognised as refugees and told that they could relocate to Canada along with their families. Despite this, the Thai authorities deported them back to China, where they were clearly at risk of an unfair trial and torture. Their families were subsequently resettled in Canada, but both Dong and Jiang have been detained incommunicado ever since.

In 2018, they were found guilty of “incitement to subvert state power” and “illegally crossing a national border” by a Chinese court. Dong received a three-and-a-half-years jail term, while Jiang received six and a half years. 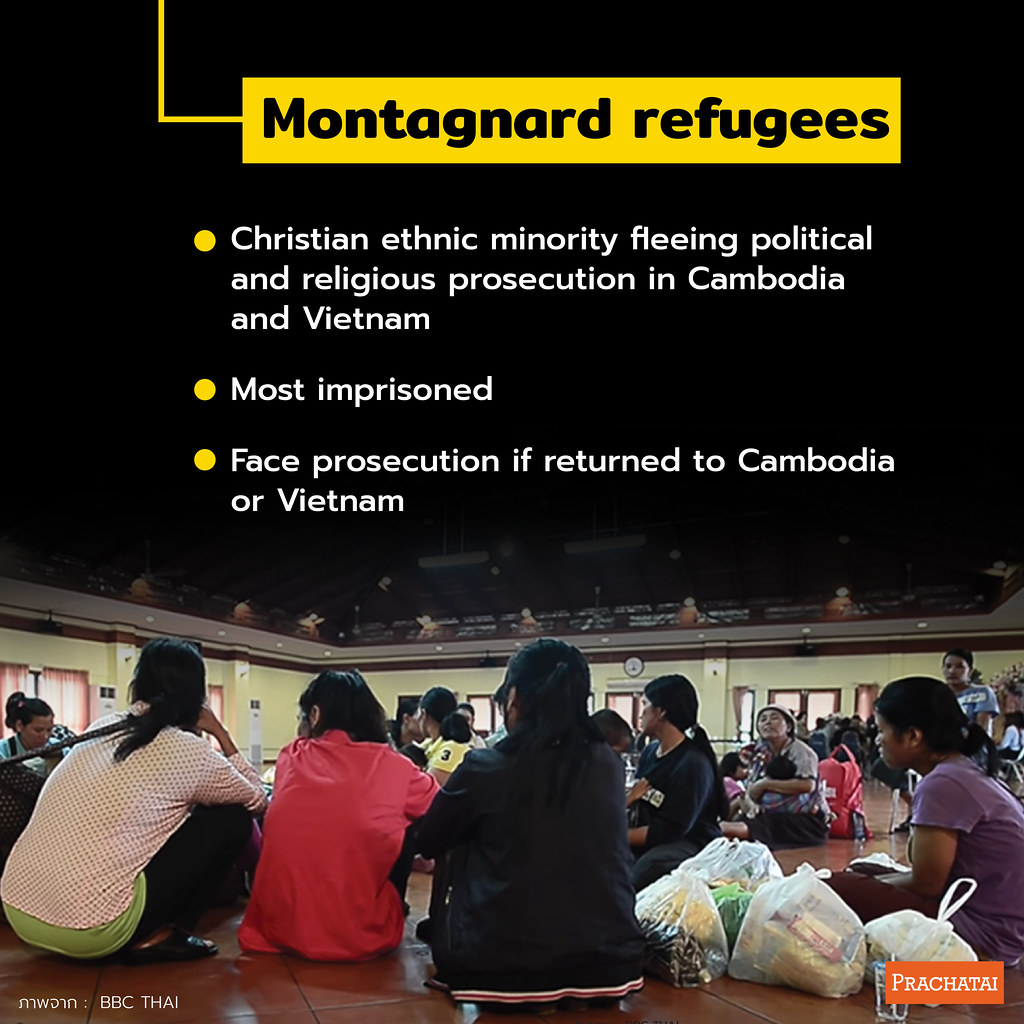 The term ‘Montagnard’ loosely refers to many Christian ethnic groups living in Vietnam and Cambodia, many of whom fled religious and political persecution to Thailand. According to Amnesty International, they are among the most persecuted ethnic groups in Vietnam, facing “a systematic, ongoing campaign of suppression against their religious and political beliefs.” In August 2018, the Thai authorities arrested over 100 Montagnard refugees living in the outskirts of Bangkok. Human Rights Watch reported that over 50 of them were children, and that most had UN refugee status. 34 refugees were then transferred to Suan Phlu Immigration Detention Centre, where they risk deportation or indefinite detention. Another 38 refugees were taken to the Nonthaburi Provincial Court and found guilty of illegal entry and illegal stay. Both groups are currently serving prison terms, and the children are reportedly separated from their parents. They are also likely to face harsh persecution if returned to Cambodia or Vietnam. 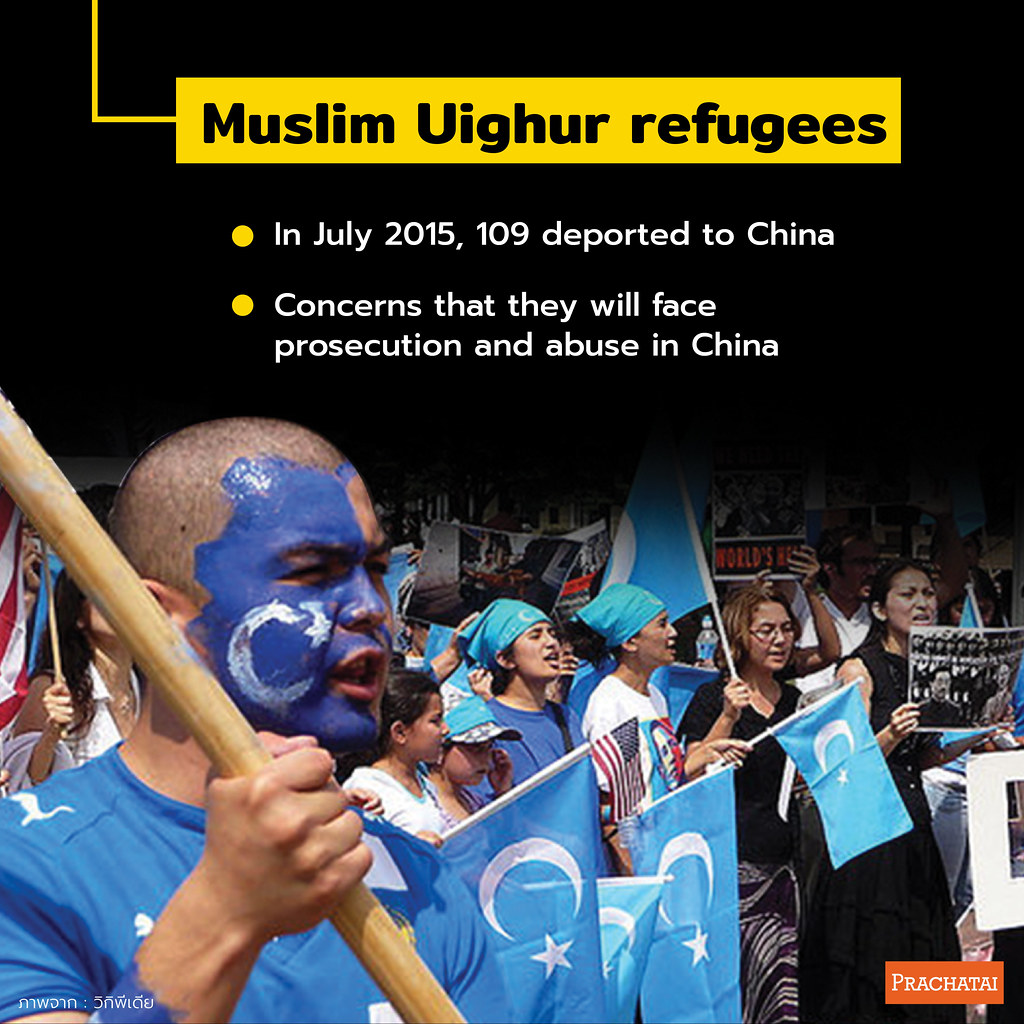 A predominantly Muslim minority group in China, a large number of Uighurs have fled unrest in the western Xinjiang region, in which “pervasive ethnic discrimination, severe religious repression, and increasing cultural suppression justified by the government in the name of the ‘fight against separatism, religious extremism, and terrorism’ continue to fuel rising tensions,” according to Human Rights Watch.

In July 2015, the Thai authorities deported approximately 100 Uighur refugees from several detention centres in Bangkok back to China. The deportation sparked protests in Turkey, which had offered to accept the refugees, with the protestors attacking the Thai honorary consulate in Istanbul. In a statement, HRW’s China director Sophie Richardson said that “Thailand has cravenly caved to pressure from Beijing and robbed these people of their only protections. The risks to Uighurs forcibly returned to China are grim and well established.” Uighurs who were previously sent back to China are known to have faced arbitrary arrest, detention, and criminal persecution.

Other than the group which has already been deported, a number of Uighur refugees remained in detention.

According to many well-informed observers, the bombing of the Erawan shrine in Bangkok in August 2015 which left 20 dead and 125 injured may have been in retaliation for the deportation.