Sunday 13 January 2019 saw more protests in the Ratchaprasong area of Bangkok and different provinces in Thailand, including Ubonratchathani, Phayao, Phrae, Nakhon Pathom, Mahasarakham, and Chiang Rai. This was the third protest in Bangkok after the NCPO revoked its ban on people's freedom of expression. 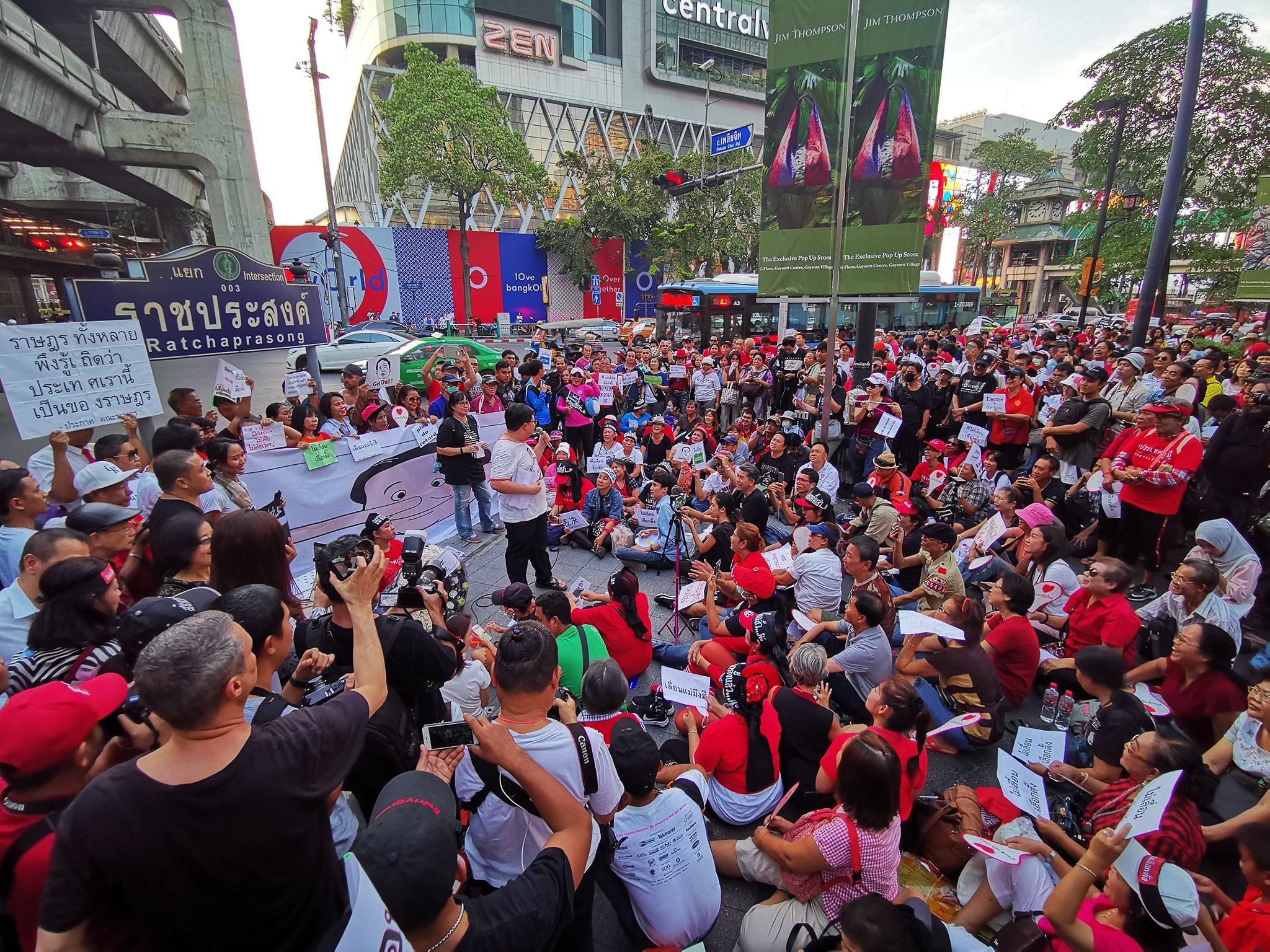 At 15.00, Ekkachai Hongkangwan, along with 10 other protesters, arrived early at Ratchaprasong with ‘No Election Delay’ and ’24 Feb Election’ signs in Thai and Chinese.

At 17.30, Sirawith Serithiwat from the People Calling for Election group read a statement: ‘No delay. No cancellation. No extra time.’

Here is an English translation of the full statement:

“Today we have almost completely run out of patience with the duplicity and the repeated attempts at excuses, and with the accusations to silence the media and the people calling for the fundamental rights of citizens. We present this ultimatum to the NCPO Government:

If by Friday 18 Jan, there has been no Royal Decree announced in the Government Gazette opening the way for the election and setting a date for the polls, we will consider the NCPO government to have demonstrated in the clearest way possible its insincerity in handing over power to the people and we will ramp up the protest at the Democracy Monument at 5 pm on Saturday 19 Jan. 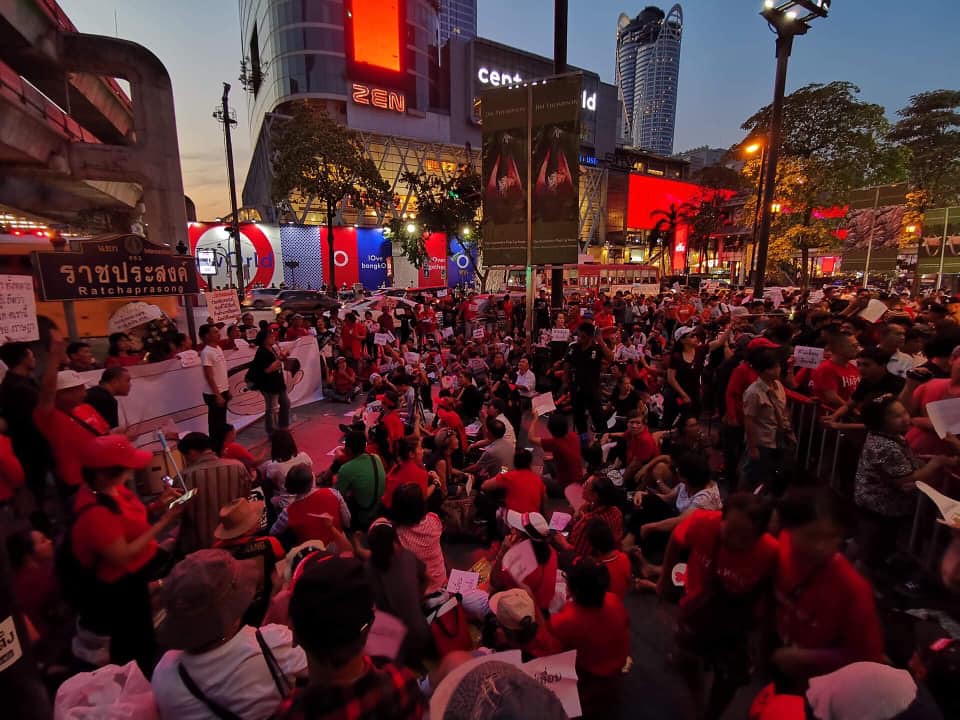 In the evening, Winthai Suwaree, NCPO spokesperson, stated that the majority of people were following the election news with judgement, understood the situation well, and were willing to create an atmosphere of “rejoicing” to celebrate the election and the auspicious coronation. Discrediting the protestors as “having turned professional”, Winthai claimed that they do not understand the bigger context.

“The movement is implicitly criticism with a negative attitude. This is not like democratic expression and does not create any social benefit. The People Calling For Election group have recently become more angry in their words, especially when they raise an issue as the democratic side and push others towards the opposite. It may be seen that their democratic maturity is defective,” Winthai said.

Thai Army Chief Gen Apirat Kongsompong  also said that pro-election rallies are inciting “chaos”, according to Khaosod English. “There are people like this in Thai society. I don’t know what to say … they want chaos. … I think those who understand are irritated,” Apirat said. “There are people who want to lead a normal life and make a living.”

In the previous demonstration, protesters fully cooperated with the police to make sure that the ordinary can walk unhindered. As this protest was dissolving, the police came in asking to seize the audio amplifier, claiming that the noise level was above the limit. The protest leaders asked to see a warrant, but the police declined to show it. While the two sides are still negotiating, the police are preventing the protesters from going home.  Tensions rose, but the situation was diffused when protest leader Nattha Mahatthana agreed to continue negotiations at Lumphini police station.

Meanwhile, demonstrations were held in Chiang Rai and Ubon Ratchathani. Sombat Boonngamanong, a prominent Thai activist, joined the protest in Chiang Rai. “I have taken back my bank account from the authorities. Next, we will take back democracy – that’s a big account,” said Sombat Boonngamanong in a soft tone.  “Please deliver what you promised. This is the sixth election delay – it has broken the world record already. Please don’t make it more difficult for other countries to compete.” 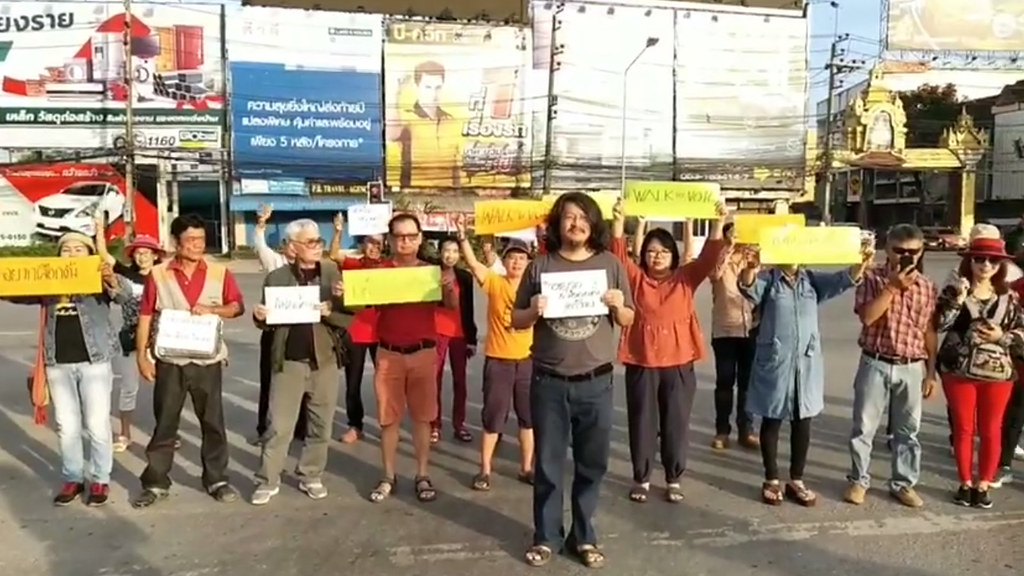 At 18.00 Thapanaphong Manmai, a law student at Ubon Ratchathani University, told Matichon Online that the time is up for the military as the government has stayed for far too long and has proved to be ineffective. The villagers share the same voice calling for elections and democracy so that the nation can develop to international standards, he said. The protest in Ubon Ratchathani at Thung Si Mueang Park lasted one hour with security checks by the police, and then dissolved. 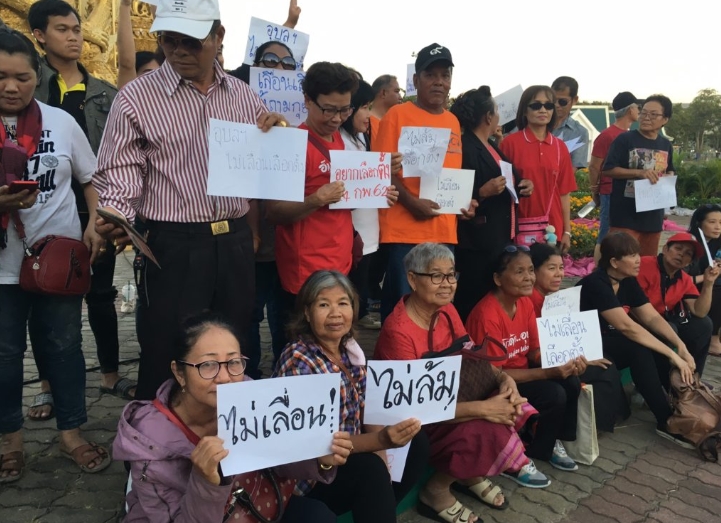 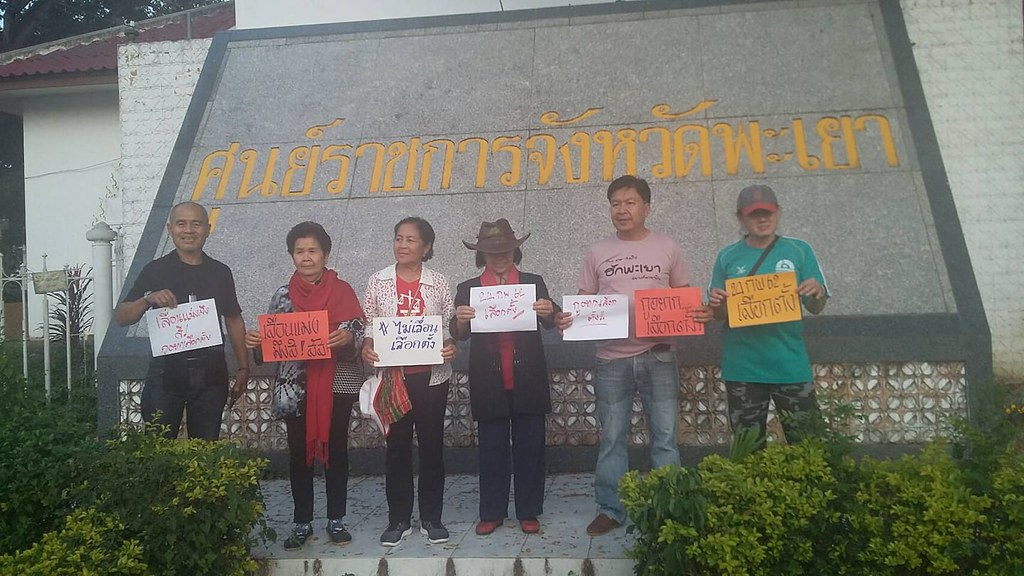 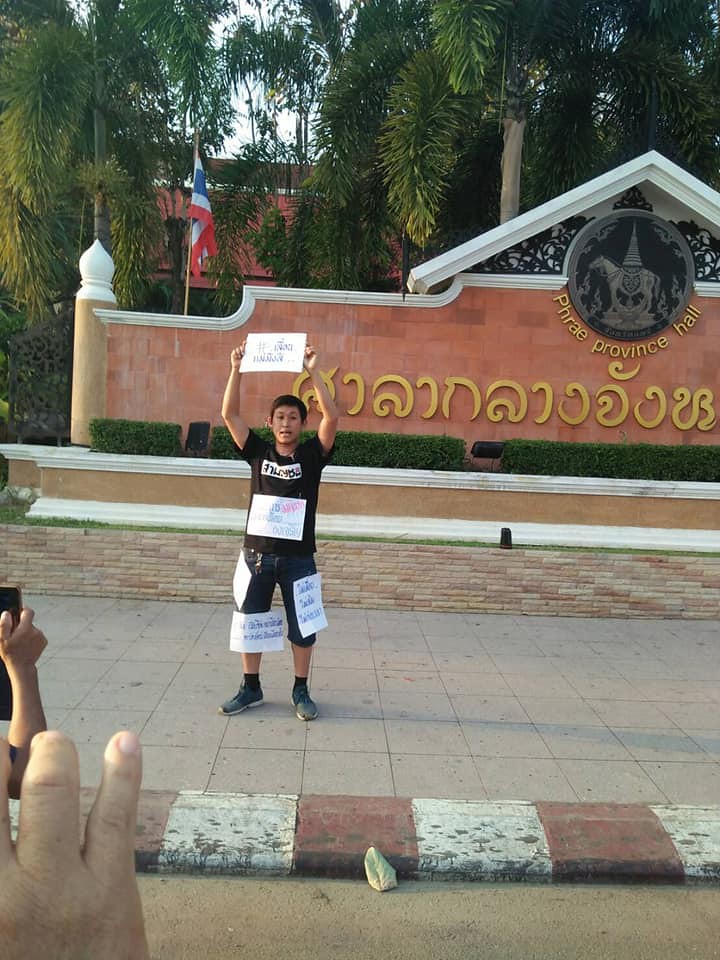 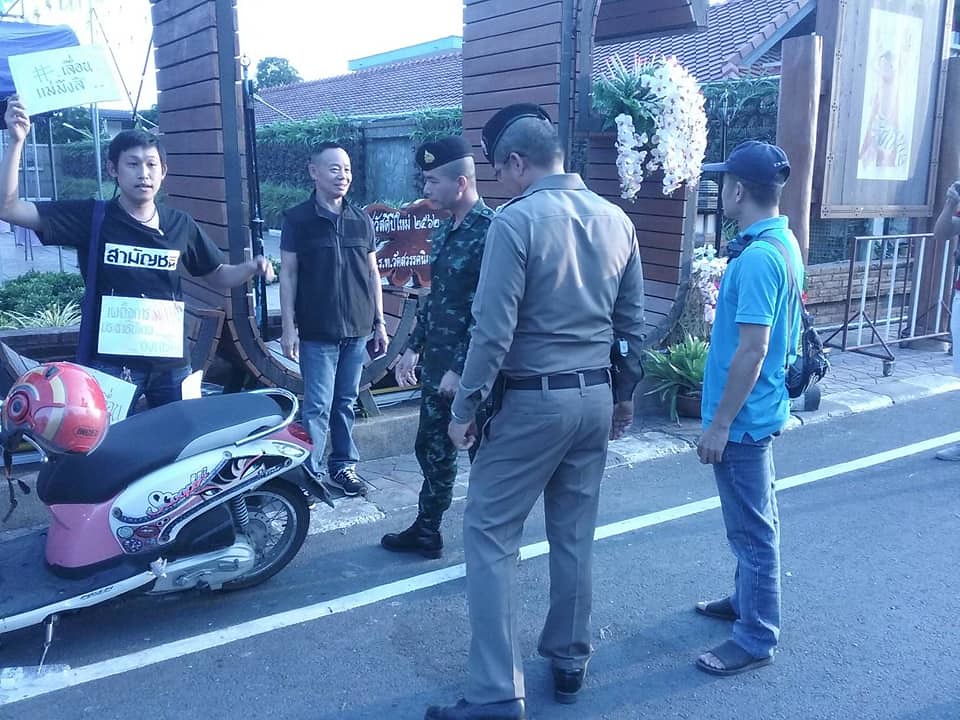 Nakhon Pathom province also saw a protest led by Lt Gen Pongsakorn Rodchompoo, a deputy leader of Future Forward Party, Amornrat Chokpamitkul, and other public figures. More than 50 officials went there to observe the situation. After reading a statement to demand a clear election date, the protesters tried to rally around the buddha statue for 3 rounds but failed to do so because the police asked them not to as it may cause a big traffic jam. The protesters fully cooperated after 10 minutes of the negotiation. 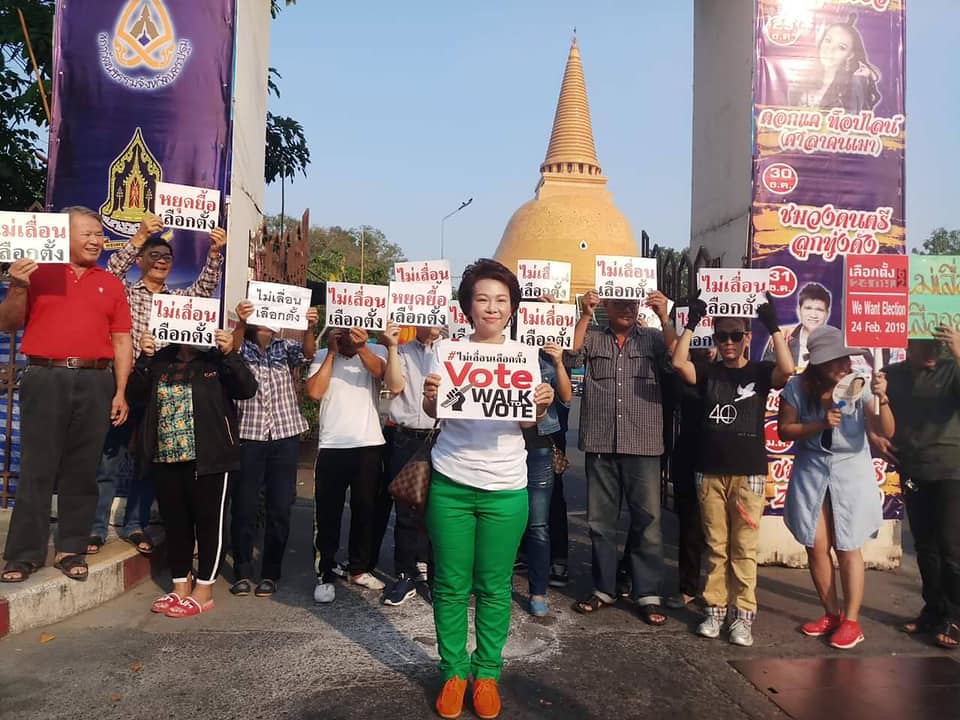 A protest, led by Phicha Maniwan, also happened in Mahasarakham. Around 20 protesters there said that they wanted to join the demonstration in Bangkok, but they cannot cover the transportation cost. Political science students at Mahasarakham University who joined the protest said that this election would be their first time and they were excited about it. Joined forces together, they demand that election date remain the same on 24 February. 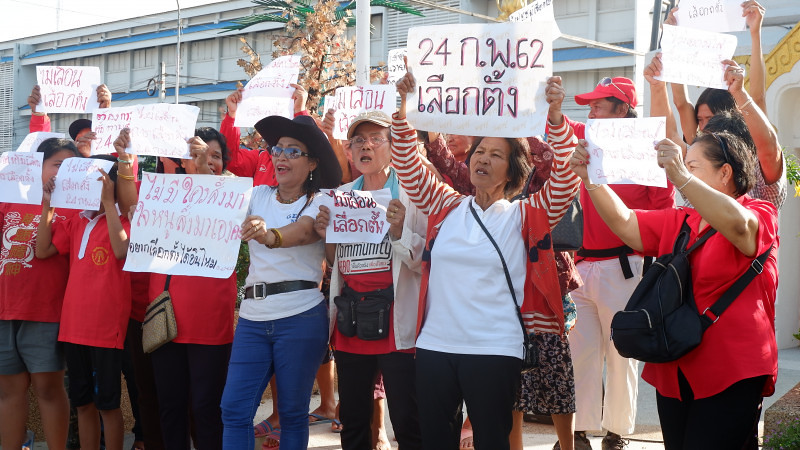