Home » Chaturon Chaisang: Pheu Thai’s strength is in its policies, its challenges lie in institutionalizing the party

Chaturon Chaisang: Pheu Thai’s strength is in its policies, its challenges lie in institutionalizing the party

Submitted on Mon, 2 Apr 2018 - 12:43 PM
Although Pheu Thai is currently facing a multitude of challenges, Chaturon Chaisang believes that the party can overcome them, from institutionalizing the party to opening up the party to participation by the new generation.
With new parties entering the election arena as alternatives for those bored of colour-coded politics, let’s see how existing large parties like Pheu Thai are strategizing and preparing for the election ahead.
Chaturon Chaisang, a senior Pheu Thai party member with the experience of a veteran of political crises who was banned from politics for five years, said that he was hopeful and confident that Pheu Thai and its politicians stood a chance of powering through the political impasse. Chaturon also wants the party to institutionalize. Pheu Thai faces both internal and external challenges, namely that a party that used to stand for the new generation is quickly becoming one of the old.
Prachatai English translated Chaturon Chaisang’s interview for Voice Online. 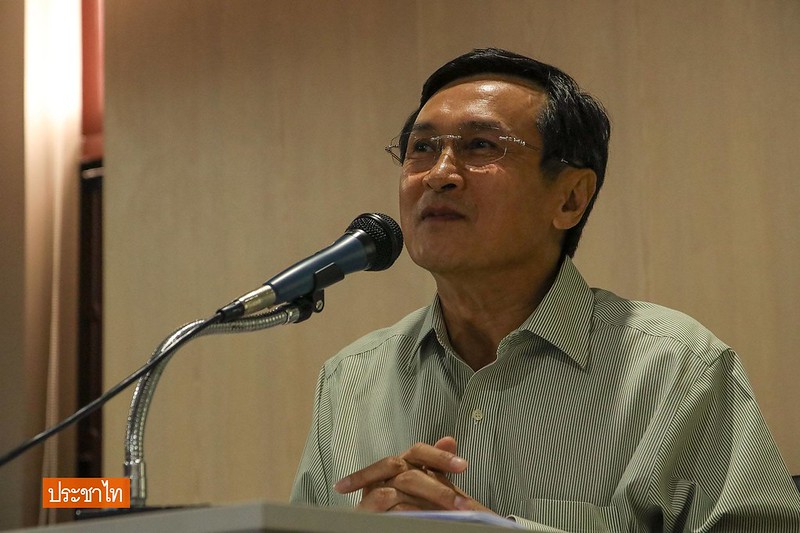 You said before that the impasse in Thai society will continue for a long time even with elections.

The impasse will last longer than the elections. We may have to say that it may be with us for a long time, or it could be with us for a long time. That depends on the election results and the understanding of people throughout the country. If in the election there are a high number of votes for an outsider prime minister, the government of the outsider can be set up and it may be secure with a Constitution that facilitates an outsider becoming the head of government. And they could also use the national strategy and reform plans that the NCPO created. That would be an administration under the system that the NCPO laid out, also with NCPO people coming to administer the country. This is the impasse in the country; this is the system that does not respond to people’s needs and does not solve the country’s problems. It is difficult for the people to monitor and insist on anything. This may last for a long time, because according to the plan of the NCPO or those in power, they surely want to stay for another 10 or 20 years.
However, if the votes for an outsider prime minister are few and the votes overwhelmingly support a democracy, beginning with the PM having to come from an election, or support political parties that have policies that clearly build democracy, this will start changes for the country to become a democracy more quickly. We will leave the impasse more quickly.

Pheu Thai is a factor that people see will be able to help shorten the time needed to break the impasse, but Pheu Thai itself has many challenges: new parties, legal restrictions, NCPO orders and so on. So, what are the most challenging conditions for Pheu Thai right now?

I still think that what is important is how to maintain the party’s strengths and enhance them on issues where Pheu Thai has skills and how to minimize its weaknesses.

And that’s without mentioning that there have emerged new political parties of the new generation.

I think Pheu Thai’s strength lies in its policies. People believe that we make good policies and when we announce policies, we actually implement them and get the results that were announced. This is a legacy from Thai Rak Thai and we must retain this strong point. But now it's a question of beliefs, it’s a question of the original investment. There are people who have worked before and who have experience in the party, but the legal system doesn’t allow them to do anything. When making party policy you have to talk to various groups including academics, various professional groups and people from different kinds of career. We can’t do this at all now. We haven’t been able to do this for 3 to 4 years and won’t be able to do so for a long time as far as we know. This, therefore, is a real challenge to making good policies that are acceptable and can really solve the country’s problems in a limited time with all of the existing obstacles. This is one issue.
The world and the country are changing. New questions are emerging on many issues including what new proposals other parties may present. This is something that Pheu Thai will have to give great importance to.
An issue where Pheu Thai has a strong point from its development over the past ten or more years is that it is a party with a clear stance in the fight for democracy. We have to maintain this, but just maintaining this stance or displaying this stance may not be enough. We may have to stand up for it. If something happens where we have to show our stance and we don’t, or we have to do something and we don’t, then that would be wrong.
But I think the country wants more than that. They need to see the process of making the country a democracy. What is the plan? What are the steps? What will we propose first and what will we propose later? This is what we have to think about.
This is something we must do seriously. The more new parties appear, the more interest we must take in getting this right with greater efficiency.
I think one important weakness may be that people still don’t view Pheu Thai as a political institution, as a political party institution. This is something we will have to overcome. What is important is that Pheu Thai’s decision-making process should include all those who go through thick and thin with us, including party members, since the new law specifies that party members have a larger role and more power. So it must be made democratic. Joint decision-making will make Pheu Thai a political institution that will last a long time. Personally, I want to see Pheu Thai as a political party that will be on the Thai political scene for a long, long time.
Other than that, other complicated challenges may be legal issues that every party has to face, and existing parties have to face the problem of having many members before but there might be just a few members left. They also have many complications with management. Assigning roles to members with the party committee; selecting candidates, and selecting the party executive committee, candidates for party leader and political office holders are all new issues. We will have to make many adjustments and these adjustments are based on rules drawn up to make political parties weak, and as obstacles to political parties. It is not that following the rules will be good. Following them will only reduce the problems.

For the new generation who have just reached voting age and did not go through political conflict, can Pheu Thai reach this age group?

If we’re talking about people who never voted before, by the election there may be 5 million, or if it’s delayed, maybe 6 to 7 million. But if we count the people who voted in 2014 whose votes were invalidated, then the numbers will be even higher. We are talking of a figure of about 8 to 9 million. If elections keep being delayed then there will be a large number of people and there are also young people who have voted before but are still the new generation who are more or less neutral. This group will be important because their interests may be different from before. Their awareness is different from people in earlier times since they have had to go through political conditions that are different from the past. For example, they have been through a long period when the country was not a democracy. They have been through a time when there have been only condemnations of and attacks on politicians and political parties. They have been through a time where there has been chaos, illegality and turmoil while the world has been changing very quickly. They face a world that changes very quickly with a new kind of economics. The internet and computer systems are taking a role in the economy and society and are reaching this group more than previous generations. So this is an issue that I think every party must pay attention and give importance to.
As I said, Pheu Thai must give importance to the issues of democracy, policies, decision-making processes within the party, and institutionalizing the party, and we are discussing what to do to support the new generation or respond to their needs or those of people who come to vote or who have never voted before, that is, new voters, where there are many issues.
We might have to begin by encouraging the middle and new generations who are in our party to have more important roles in our decision-making and work, which we can start doing now since we already have the people. But it's important not to stick just to the older generation, only people with a lot of experience, to lead the party, to administer the party. We may think of comparing the party to a national soccer team, which is very good and world champions. After playing a while, they find they can’t compete because when you really look at it, you see that all the players are a generation that were champions two eras ago. It comes to having to make a new team. Political parties have to be thought of in a similar way, too. We must to allow the middle generation and the new generation to participate, and not stick to saying, hey, they have less experience than us. Can they manage? Can they lead? Because the truth is that these people are the people of the party and are an important force in the party. Why shouldn’t they be supported?
Other than that, we have to open up, that is we must accept new people to join our work and study the needs of the new generation. Political parties must invite them and respond to their needs as electors. All this needs support processes, which must be the same processes needed to make the party democratic and make a party with a stance, with a plan to make the country a democracy, with good policies. This all goes together.
We may also have to give more importance, special importance to groups that we never worked with before, never voted for us before, or never voted for anyone before. This is an issue that should not be overlooked.

So does Pheu Thai now really have a middle generation and a new generation ready to get to work?

This is a good question that warrants a serious response. Is it the case? I think so, yes. We bear comparison with new people coming in, outstanding people. These people may start now. But we have to dare to do it and we have to open the opportunity for them to decide to connect with us.
Interview
2019 general election
Chaturon Chaisang
Pheu Thai