Submitted on Tue, 6 Mar 2018 - 04:39 PM
Piyabutr Saengkanokkul
In the past week, news broke that Piyabutr Saengkanokkul, Assistant Professor at the Faculty of Law, Thammasat University and a member of Nitirat (a group of Thammasat law professors who offer academic legal advice to society), would take a step back from academia and into politics by founding a new political party with Thanathorn Juangroongruangkit. Piyabutr said that Thailand’s decades-long political crisis would continue, but the situation would improve only if young people got their hands dirty by tackling politics head-on.
Since Piyabutr has not yet given many interviews with the press, Prachatai has transcribed his lecture about the political crisis and the young and translated it into English. The following is part of his lecture in the seminar titled “Changing Thailand: The Past, Present, and Future in an Economic, Political, Legal, and Social Context” on 23 Feb. 2018 at Thammasat University, Rangsit Campus.
--------------------------- 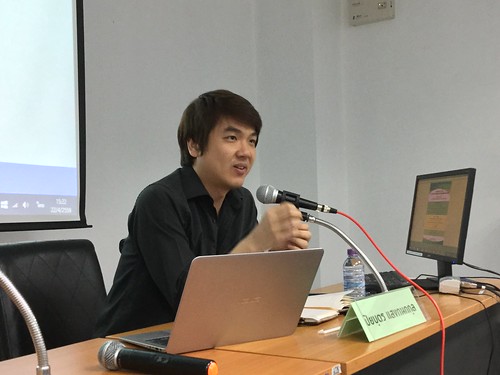 The young, aged around 18 to 25, have not been involved in the political crisis that began in 2005. But the crisis over the past 12 to 13 years has created a huge burden for this age group. This generation will live for at least another 40 years, but the people who created this mess will eventually die off without knowing what the future will be like. Therefore, I implore the young, who did not have anything to do with the political conflict and did not create these problems, to take up this burden. These troubles will lessen if the young try to solve these problems themselves.
Most people here were born in the 1990s. You guys grew up constantly hearing news about political crisis. As you were becoming interested in politics, another coup happened. Then you heard about the 2005 crisis and the 2006 coup. You heard about elections and a semi-normal state in politics before the 2009 to 2010 crisis. There were elections again and more crises. Then there was the 2014 coup and all the problems that we see until today.
In other words, in all of the time you’ve spent with this country’s politics, you’ve never experienced a democratic system. For over half of your lives you haven’t lived in a normal political situation. If you let this continue then you will have to bear this burden for another 30 to 40 years. Therefore, the young must take change into their own hands because it won’t do to rely on the older generation. Secondly, the gridlocked political situation we see every day is because the same characters keep reappearing on the political scene. There’s no trust between them and they keep firing questions at each other. The same people manage the country in the same way while the world keeps turning.
The same political strategies, political systems, constitution drafting methods that have always been used are out of date and may not be a good fit for the current generation who will be tomorrow’s adults. Therefore, to escape this conflict and prevent the same faces from having too big a role and betraying the trust of the people, we need new options. If we have new options and new systems and new blood, the political crisis could be overcome. At the very least, after the NCPO we could see some fresh faces.
Opinion
2019 general election
Piyabutr Saengkanokkul