Submitted on Wed, 10 Jan 2018 - 04:31 PM
The anti-election monk has urged the police to stop harassing his disciples after the authorities visited his temple to investigate the lèse majesté allegation against him.
On 9 January 2018, Suvit Theerathammo, abbot of Wat Or Noi temple, and his lawyer visited the police’s Crimes Suppression Division to ask information about the lèse majesté lawsuit that he is facing.
The monk claimed that many police officers have come to his temple and questioned his disciples about Suvit’s personal information.
“Previously, I was informed that police officers had interrogated my close disciples and people in Wat Or Noi. Moreover, there is a rumour that there will be a raid into the temple, so I come today to talk with the authorities,” Suvit stated, adding that if the authorities continue such measures, he will petition the Royal Thai Police chief.
On 10 April 2017, Wichai Prasertsutsiri, coordinator of the Centre for the Promotion of Buddhism Foundation, filed a complaint under Article 112 of the Criminal Code, the lèse majesté law, against Buddha Isara.
Wichai claimed that in May 2009 the monk performed a ritual to bless Buddha amulets before selling them to his disciples. Suvit violated the lèse majesté law because he used his blood to enchant the amulets which were engraved with the royal monograph of the late King Bhumibol.
Suvit, also known as Buddha Isara, was one of the most popular leaders of the anti-election People’s Democratic Reform Committee in 2014. He led his disciples and protesters to occupy the government complex on the outskirts of Bangkok. He has also been an active supporter of the use of the lèse majesté law.
In late 2015, he demanded that the police investigate Glyn T. Davies, the US Ambassador to Thailand, over his criticism of the lèse majesté law. He led rallies in front of the US Embassy to call on the US to extradite lèse majesté suspects. 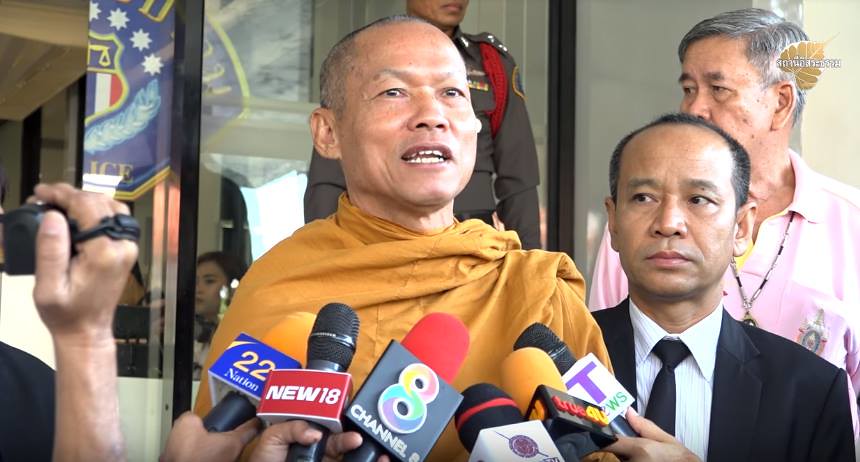