Military has attempted to ban a book about the rice subsidy programme authored by politicians from the Pheu Thai Party.

On 14 June 2017, Gen Chalermchai Sittisad, Commander-in-Chief of the Royal Thai Army, spoke to the media about a visit to the house of Yuttapong Charasathien, a former Pheu Thai MP and Deputy Minister of Agriculture and Cooperatives, by eight soldiers on 11 June.

Dismissing earlier reports that the soldiers went the politician’s house to ask him to answer the junta head Gen Prayut Chan-o-cha’s four questions on elections, he clarified that the visit was in fact about a book about the rice pledging scheme titled ‘Destroy the Rice Pledging Scheme, but Kill the Farmers’.

The book was written by Yuttapong and four other former Pheu Thai MPs about the rice subsidy programme of the Yingluck Shinawatra administration, which reportedly incurred losses of billions of dollars. Yingluck, the former elected Prime Minister, currently faces impeachment over corruption charges in connection with the programme.

According to the army chief, the National Council for Peace and Order (NCPO) has already prohibited distribution of the book.

Thai Lawyers for Human Rights (TLHR), however, point out that it is unclear which laws the authorities have invoked to ban the book.

Nonetheless, on 27 May soldiers searched the house of Suchart Lainamngern, another of the authors of the book, and confiscated 190 copies without presenting any warrant.

TLHR reported the Pheu Thai MPs as saying that sales of the books have been suspended at many bookstores. However, Se-Ed Book Company claimed that the book is out of stock.

Prohibition of any publication in Thailand is subject to the 2007 Printing Recordation Act in which the Commissioner-General of the Royal Thai Police can authorise the ban on ‘any printed matter which is defamatory, insulting or vengeful against the King, the Queen, the Heir to the Throne or the Regent, or may affect the security of the Kingdom or the public order or good morals of the public’.

In April 2016, the French edition of Marie Claire magazine was banned because of an article on a member of Thai royal family.

In 2014, the Thai police banned ‘A Kingdom in Crisis,’ a book written by former Reuters journalist Andrew McGregor Marshall because of allegations of lèse majesté.

The book talks about Thailand’s deep political divide between the pro-establishment yellow shirts and anti-establishment red shirts, including references to the revered Thai monarchy. It also discusses the succession in terms of the anxiety it creates for Thai royalists. 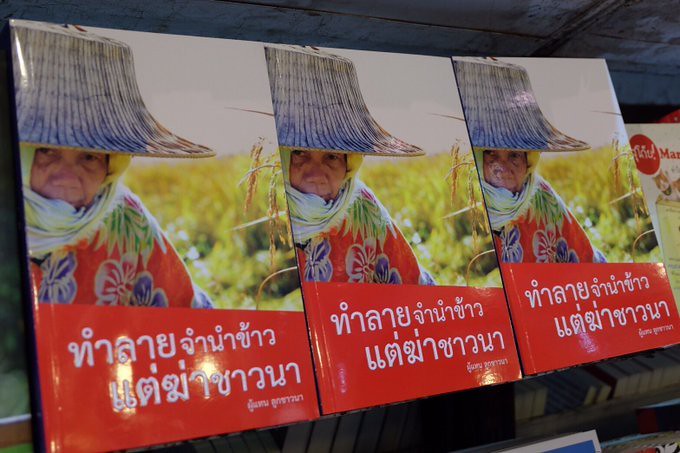 The cover of ‘Destroying the Rice Pledge Scheme, but Kill the Farmers’ (Photo from THLR)