An embattled anti-junta activist ‘Pai Dao Din’ has received a prestigious Gwangju Prize for Human Rights while attending a trial at a military court.

On 22 May 2017, Jatuphat ‘Pai’ Boonpattararaksa, a law student and key member of the New Democracy Movement (NDM), was taken to the Military Court of Khon Kaen Province for attending a trial.

The trial was on a case in which Jatuphat and seven other democracy activists were indicted for violating the National Council for Peace and Order (NCPO) Head’s Order No. 3/2015 for a participating in a peaceful gathering to commemorate the 2014 coup d’état on 22 May 2015.

The order forbids a political gathering of five or more persons.

Before the trial began, Jatuphat reunited with his family who presented him 2017 Gwangju Prize for Human Rights.

His family travelled to Gwangju, South Korea to attend the award ceremony held between 16-18 May of Jatuphat’s behalf as the Provincial Court of Khon Kaen denied his bail request earlier.

The award commemorates the Democratic Uprising or the Gwangju Uprising of 18 May 1980, when Gwangju citizens battled the Chun Doo-hwan dictatorship of South Korea. Estimates suggest that up to 606 people may have died during the crackdown by government troops.

“The 2017 Gwangju Award Committee for Human Rights admires the bravery and love of justice [of Jatuphat] who fight against dictatorship and violation of human rights. Your struggle helps igniting the interest in politics among young people,” reads part of the statement from the award committee.

Jatuphat is accused of violating the lèse majesté law for sharing on his Facebook account a controversial biography of King Vajiralongkorn published by BBC Thai. He is the first person to be arrested for lèse majesté under the reign of the new King.

Shortly after he was arrested for lèse majesté on 3 December 2016, the court released him on bail. However, his bail was revoked on 22 December after he posted a satirical message mocking the authorities on his Facebook account. The message read, “Economy is poor but they (authorities) took my money for bail.”

Despite the fact that more than 2,000 people shared the same article on Facebook and millions read it, he was the only one arrested for lèse majesté.

The court has consistently refused to release him on bail, reasoning that the activist mocked the authority of the state without fearing the law and is also battling other charges for violating the Public Referendum Act and the junta’s political gathering ban in his previous political activities. 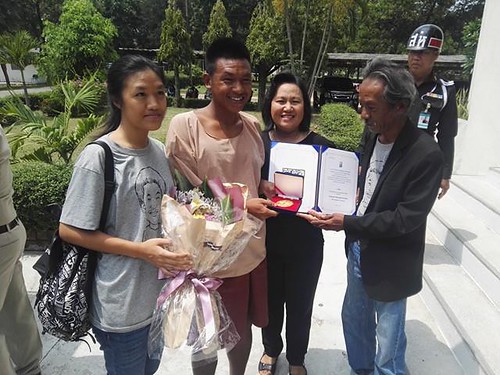