Home » The devil in the details: Thailand’s new constitution in a nutshell

The devil in the details: Thailand’s new constitution in a nutshell

After almost three years in power and billions of baht spent in drafting the new constitution, the 20th Constitution of the Kingdom of Thailand was officially enacted on 6 April 2017. Thailand has gone through 19 constitutions in less than a century and there is no guarantee that the latest one drafted by the junta-appointed Constitution Drafting Committee will be the last one.

Prachatai has summarised some of the main points of the junta-sponsored constitution below. 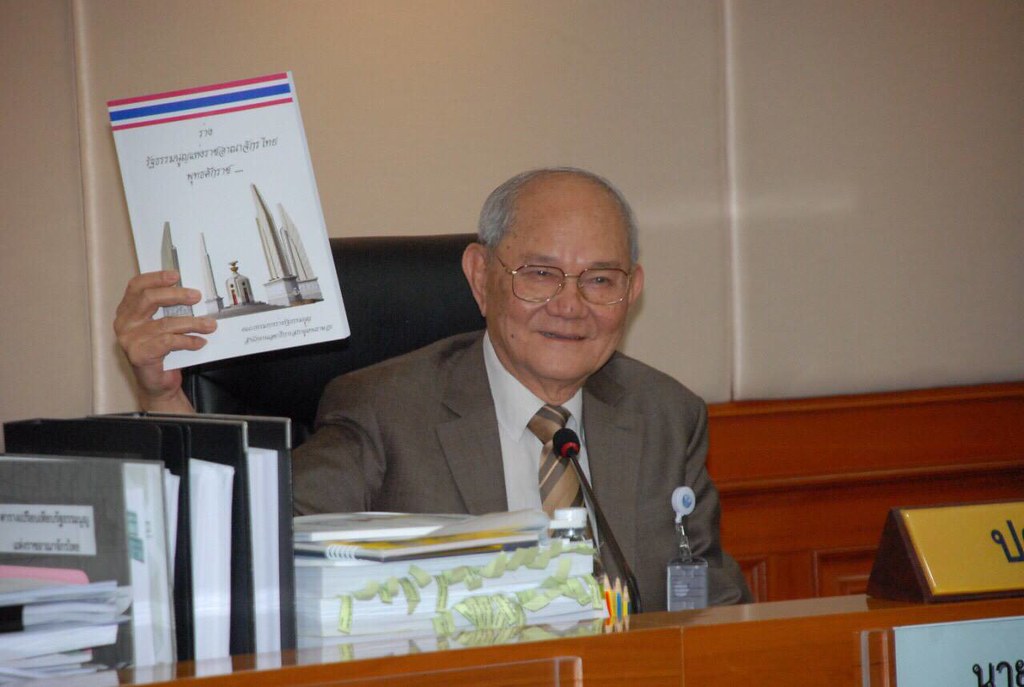 Meechai Ruchuphan, chairman of the junta-appointed CDC, showing the draft of the 20th Constitution of Thailand.

As Section 44 of the Interim Constitution will still be in force until the assumption of the new government, the junta still has absolute power during the election and formation of the new administration.

All past and future orders and announcements of the junta or the junta leader have the force of law under the new constitution unless and until a future government formally amends them.

It will require 1/3 of senate votes in the 1st and 3rd readings together with at least 20% MPs from each opposition party and also the approval from the President and Deputy President of Parliament to amend the constitution. A public referendum is required to amend certain sections.

With a majority of the lower house, a Prime Minister candidate who is not a member of any political party can be proposed to parliament. A vote of 2/3 of parliament will then approve the candidate.

Under a provisional clause, all 250 members of the first senate will be chosen by a selection committee itself handpicked by the junta, and six seats in the upper house are reserved for four top military commanders, the police chief, and the permanent secretary of the Defence Ministry.

The appointed first-term senate will outlive the lower house by one year and could join the lower house in voting for the Prime Minister. One of their tasks is to make sure any new administration follows the 20-year national strategies put in place by the junta.

Elected government with its hands tied

Under the new constitution, independent state agencies could file complaints to the Constitutional Court to decide whether certain ministers have the proper qualifications to hold office or if they breach ‘moral standards’.

Unlike the party-list system of proportional representation, the new MMP voting system makes every vote count for both candidate and party. It will give more seats to small political parties, and many critics claim that this could lead to inefficiency or political gridlock as parties will be forced to rule through coalitions. The complexity of the new system could also cause more vote buying as well.

Not free and fair

According to Thai Lawyers for Human Rights (TLHR), at least 212 people were accused of violating the junta’s ban on political gatherings or the controversial Public Referendum Act, which were used to prevent critical discussion of the junta-sponsored constitution before it was approved in a public referendum on 7 August 2016.