Home » Summary killings common in the land of smiles

Summary killings common in the land of smiles

Not even a month after the summary killing of Chaiyapoom Pasae, a 17-year-old Lahu activist, on 17 March 2017, paramilitary officers and soldiers shot dead two insurgent suspects in the restive Deep South. The authorities claimed that the two resisted arrest and exchanged gunfire with the officers. However, the sister of one of the slain insurgent suspects said they were unarmed and shot point blank after they were asked to step out of their car.

Summary or extrajudicial killing is a common crime committed by security officers in Thailand because of the deeply rooted culture of impunity which allows the killers to walk free. During the first three months of 2003, an average of about 30 people were killed each day after Thaksin Shinawatra, the then Prime Minister, launched an all-out war on drugs. In total, about 2,800 people were summarily killed and many more suspected of drug abuse or trafficking allegedly suffered torture by paramilitary troops or police officers. More than a decade has passed, but not a single security officer has been prosecuted or arrested.

Prachatai has selected examples of summary killings.  In most cases, the calls for justice from the families of the victims have yet to be answered. 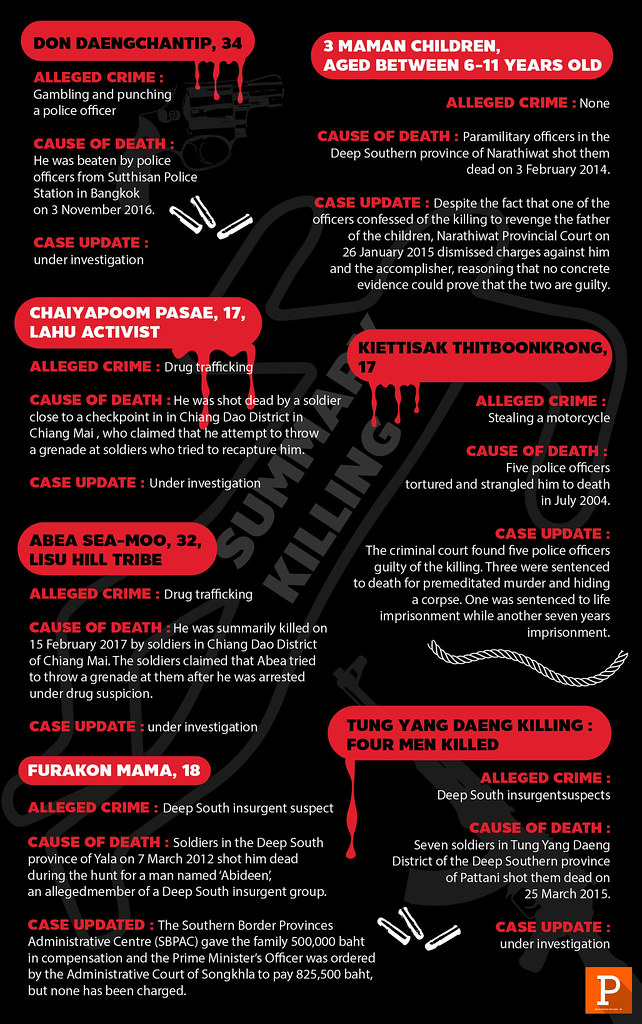 Cause of death: Five police officers tortured and strangled him to death in July 2004.

Case update: The criminal court found five police officers guilty of the killing. Three were sentenced to death for premeditated murder and hiding a corpse. One was sentenced to life imprisonment while another seven years imprisonment.

Cause of death: Soldiers in the Deep South province of Yala on 7 March 2012 shot him dead during the hunt for a man named ‘Abideen’, an alleged member of a Deep South insurgent group.

Case updated: The Southern Border Provinces Administrative Centre (SBPAC) gave the family 500,000 baht in compensation and the Prime Minister’s Officer was ordered by the Administrative Court of Songkhla to pay 825,500 baht, but none has been charged.

Cause of death: Paramilitary officers in the Deep Southern province of Narathiwat shot them dead on 3 February 2014.

Case update: Despite the fact that one of the officers confessed of the killing to revenge the father of the children, Narathiwat Provincial Court on 26 January 2015 dismissed charges against him and the accomplisher, reasoning that no concrete evidence could prove that the two are guilty.

Cause of death: Seven soldiers in Tung Yang Daeng District of the Deep Southern province of Pattani shot them dead on 25 March 2015.

Cause of death: He was beaten by police officers from Sutthisan Police Station in Bangkok on 3 November 2016.

Cause of death: He was summarily killed on 15 February 2017 by soldiers in Chiang Dao District of Chiang Mai. The soldiers claimed that Abea tried to throw a grenade at them after he was arrested under drug suspicion.

Cause of death: He was shot dead on 17 March 2017 by a soldier close to a checkpoint in in Chiang Dao District in Chiang Mai , who claimed that he attempt to throw a grenade at soldiers who tried to recapture him.