Security officers have detained an anti-junta political dissident at the Dhammakaya Temple complex.

At 4 pm on 2 March 2017, about 10 soldiers and officers from the Department of Special Investigation (DSI) detained taxi driver Phaisan Chantapan, a regular participant anti-junta political activities, at the Dhammakaya Temple in Pathum Thani Province, north of Bangkok.

About two hours later, Phaisan told Prachatai that he had been taken to the Border Patrol Police Region 1 on suspicion of calling on Dhammakaya disciples to come to the temple.

The officers confiscated his mobile phone. Before releasing him, the officers forced him to sign a memorandum of understanding promising not to enter the temple again until the authorities revoke the restriction order over the area.

In late February, the officers detained two members of the anti-establishment red shirts for similar reasons.

On 15 February, the junta invoked its absolute power under Section 44 of the Interim Charter to declare Dhammakaya temple a “controlled zone,” granting security officers the authority to search buildings, make arrests and cut off water or electricity supplies as they see fit.

According to Thai Lawyers for Human Rights and Mahidol University's Institute of Human Rights and Peace Studies, this order is technically equal to declaring martial law over the area and violates human rights.

The order facilitates attempts to arrest Dhammachaiyo, the spiritual leader of the Dhammakaya sect. He is alleged to have accepted more than a billion baht in donations from the president of a credit union who is now in prison for embezzlement. Dhammachaiyo has also been charged with illegal land encroachment. 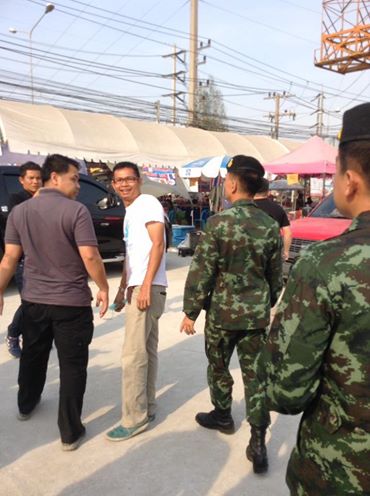