Loneliness and love under Thailand’s junta

Submitted on Mon, 6 Feb 2017 - 03:23 PM
Shui Yu
The first case of lèse-majesté under Thailand’s new  King Vajiralongkorn accuses an undergraduate law student. Both Jatupat ‘Pai’ Boonpattararaksa’s youthful grin in newspapers and the petty nature of his crime — sharing a BBC article on his Facebook wall — make the young man a puzzling suspect. He does not appear as one of the country’s most dastardly criminals..
Instead, Pai seems startlingly relatable — something to unsettle the National Council for Peace and Order (NCPO). It is well-documented that authoritarian regimes rally support — or at least nurture apathy — by publicly demonising their opposition. But in months the NCPO has aimed to alienate the Thai public from more than just dissidents. The junta has sought to plunge the masses into a certain loneliness. 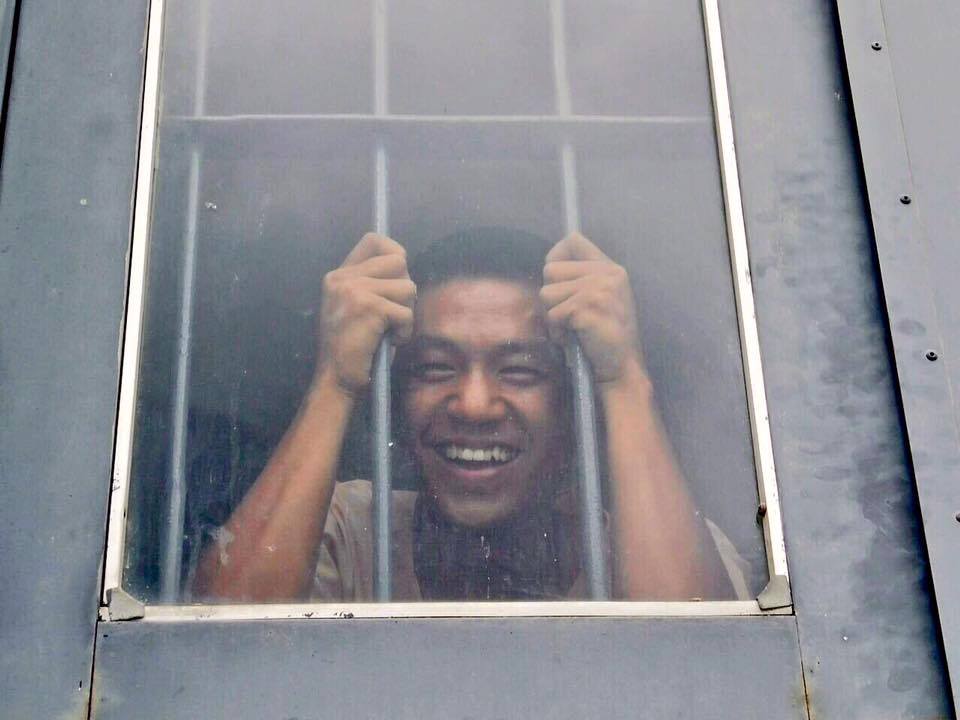 Shortly after he was arrested on 3 December 2016, the court released Jatuphat on bail. However, his bail was revoked on 22 December after he posted a satirical message mocking authorities on his Facebook account.
Seminal historian Nidhi Eoseewong, as well as Tyrell Haberkorn, have drawn upon Hannah Arendt’s The Origins of Totalitarianism to argue that since the mid-2000s Thai politics has assumed a totalitarian fragrance. It is not that Thailand’s military government has succeeded in ‘controlling the daily life of the people, or actually, controlling the brain or the thinking of the mass’. The NCPO lacks the efficiency and apparatus of totalitarian regimes of old.
Nevertheless it is clear from the pseudo-religious devotion demanded by the junta-backed ‘network monarchy’ that the state draws upon selected elements of totalitarian control via ideology. In the wake of the coronation of a widely unpopular new King, elements of totalitarianism may be key to making sense of the junta’s hurtling movements, as it deals with the insecurity of the pro-monarchy ideology on which its rule has always rested.
Since the death of King Bhumibol Adulyadej in October 2016, the NCPO has been characterised by a less frenzied scramble to shore up its ideological legitimacy, which had been previously secured by association with a ‘demi-god’ monarch. The regime’s flurry of repressive laws, surveillance institutions and escalating prosecution rates indicate an unprecedented interest in intercepting the realm of private thought.
Of course, collective expression and assembly have always been risky under Thailand’s brutal military regimes. But the newly amended Computer Crimes Act lays bare the junta’s rising infiltration into private life. Involved are harsh punishments to coerce internet service providers into providing previously confidential user data. Possession, not merely the sharing, of ‘immoral’ content is punishable. A well-publicised public relations campaign attempts to woo social media apps into giving authorities access to private messages.
Even more eerily, those measures dealing with public expression have dwelled on the banal, and the everyday. Though significant uproar accompanied BBC Thai’s publishing in December 2016 a controversial biography of the new King, the first case of lèse-majesté under the new reign honed in on someone comparatively removed from the article: a law student-activist who shared the article on Facebook. Simultaneously, reports emerged of authorities investigating users for merely ‘liking’ the page of an exiled critic.
Though the NCPO is trying to send the message that dissent is intolerable at all levels, this new harshness has blurred with baffling inscrutability. What is ‘immoral’ content? Why Jatupat, when thousands of other Thais also shared the King’s biography on their Facebook walls? The cumulative effect is a pause, as the Thai public is forced to rewire their conceptions of acceptable/unacceptable, legal/illegal, public/private — but along inconsistent signals from the state.

The message deemed mocking the authorities simply read, “Economy is poor but they (authorities) took my money for bail.” (Photo from Facebook)
The pause brings solitude. Once breezy actions now warrant careful contemplation — not just for those with anti-establishment hearts, but for anybody capable of sharing a news article. Following Jatupat’s arrest, hundreds of Thais rethought their posting of the BBC article from their timelines, causing the post’s share-count to plummet. During the shaky period of ideological succession, more and more social exchanges will be tempered by hesitation, risk assessment and self-censorship.
Why, then, has the NCPO’s quelling of collective life been mirrored by unprecedented public unity behind  Jatupat ‘Pai’ Boonpattararaksa? Jatupat has become the subject of countless local and international advocacy campaigns. Such support from civil society is significant. Large NGOs operating in Thailand have frequently exhibited reluctance to associate with lèse-majesté suspects. In reflection of Jatupat’s unusual case, he was initially released on bail — a once in a blue moon phenomena for lèse-majesté.
When authorities took issue with another of Jatupat’s Facebook statuses, even local media found a socially resonant narrative in Jatupat and his family. Authorities are coming off as heavy-handed throughout a relentless campaign by Jatupat’s mother to have her son released on bail in time to take his final exams before graduating. In the dissonant image of Jatupat has been the realisation for many Thais that more actions than they thought can land one in a jail cell, and that they and a lèse-majesté prisoner may not be so different after all.
As the NCPO tightens its grip over the minds and hearts of Thai citizens, it treads a line between discouraging collective political expression, and the public finding empathy in the universal experience of fear, isolation and risk. The net of prosecutable actions in Thailand is broadening, but so too is the relatability of the other.
There is significance as the Thai public begins to feel pity, sorrow and even empathy for those prosecuted by the NCPO — all the more so in the realm of ideology where, as Eoseewong poignantly notes, ‘even love is dangerous … because love creates a bond between two atoms, unrelated to the bond with the state’.
This article was first published at New Mandala ­– the premier website for analysis on Southeast Asia’s politics and society.
Shui Yu is a pen name. The author is a research student.
Pick to Post
2007 Computer Crimes Act
Article 112
Jatupat ‘Pai’ Boonpattararaksa
Lèse-majest
Nidhi Eoseewong
Shui Yu