The Central Administrative Court has dismissed a lawsuit filed by anti-mine villagers against both a gold mine company and Thailand’s Industry Minister, saying villagers’ claims about the environmental effects of the mine are not credible.

On 28 December 2016, the Central Administrative Court in Bangkok dismissed a lawsuit filed against the Minister of Industry, the Director-General of the Department of Primary Industries and Mines, and Tungkum Company, a gold mine operator in Loei.

Sarawut Promsopha and 588 people, most of whom are villagers from Wang Saphung District of the northeastern province of Loei, were the plaintiffs in the case.

The villagers accused the state officials for malfeasance in office for overlooking the environmental and health impacts believed to have resulted from the mining operations of Tungkum Company in the district.

The court, however, dismissed the lawsuit, citing research findings from Chulalongkorn University.

The research concluded that the excessive level of heavy metal contamination, such as cyanide in the earth and creeks of the district, is naturally found in areas with iron ore deposit and is not caused by mining operations.

Wang Saphung villagers who travelled to the court to hear to ruling were disappointed by the verdict.

Pornthip Hongchai, a member of the local anti-mine activist group Khon Rak Ban Koed (translated to ‘People Who Love Their Home), said “It’s a nightmare, when [they] cited the research finding, our voices become meaningless”

Tension between Wang Saphung villagers and Tungkum Company reached its peak in September 2013 when the villagers barricaded the mine entrance, blocking trucks —  each of which normally carries 15 tons of cyanide waste — from passing through their villages. Although the sound of the machines disappeared and the sound of chirping birds returned, the villagers had to live in fear of judicial harassment, thugs, gunmen and death threats.

Currently, Tungkum has halted mining operations since mid-2013. However, the company is currently trying to get permission from the authorities to renew its mining concessions in Wang Saphung. 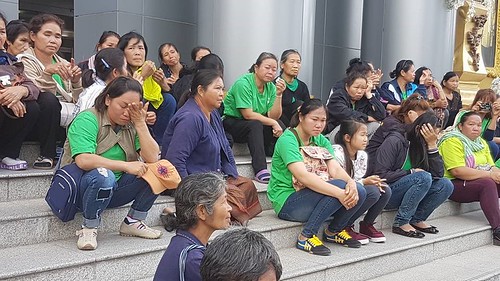