Tales from the waste land II: Thai language ability and failure by ethnicity

“As far as we can discern, the sole purpose of human existence is to kindle a light of meaning in the darkness of mere being.” C. G. Jung, Memories, Dreams, Reflections.

The last column from the Waste Land, Tales from the Waste Land I: Thai IQ by ethnicity, prompted some email exchanges. Specifically, should IQ be used in education? The Special Circumstances position is that IQ should not be used as a direct educational benchmark. In fact, IQ is not usually used in this way in most countries in the world, which instead rely on forms of national subject testing. This makes its inclusion in the 2014 UNDP Thailand Country Report as a direct benchmark of education somewhat puzzling.

Of course, IQ should be used within the education system as part of a battery of options to check for specific problems with mental health, including malnutrition, pre-natal stressors (such as smoking and alcohol), Iodine Deficiency Disorder and the presence of neurotoxins. Furthermore, longitudinal scientific research including IQ scores can be used to examine school achievement, socio-economic status and lifelong development. Many academic and job tests do include logical-mathematical intelligence components and, whether we like it or not, companies (and the armed forces) therefore are screening for IQ, though they often do not use the term.

In addition, Special Circumstances wishes to underline the fact that the language used in the administration of the IQ test will have an effect. Even if the test is mainly visual, as the 2011 test was, there have to be some basic instructions given at some time. Thus, if Thai were used as the language of administration, even if only for basic instructions, one would expect Thailand’s millions of ethnic minority children for whom Thai is not the mother tongue to achieve lower results – as they indeed do. Then, there is the whole issue of cultural bias in IQ tests.

Furthermore, there are alternatives to IQ, including ‘Dynamic Assessment’ (DA), championed by Lev Vygotsky. Essentially, this viewpoint is that human beings are not static individuals but in a constant state of development and transactional interaction with the world. In this framework, “fixed and immutable” concepts, the bedrock of IQ, can be taught, by establishing the baseline of the student and then the potential level of the student with some assistance – the ‘zone of proximal development’. Thus, psychological development in DA is a measure of two factors, rather than assessment of actual development alone, as in IQ tests.

As can be seen from the following official Thai ONET (‘Ordinary Net National Test’, age 16) data from 2014 for the Thai Language Subject, as with IQ, there are major differences in Thai language, with the Thai Malay and Thai Lao scoring lowest. This is unfortunate, because the language of schooling inevitably influences ability on other academic subjects and therefore social mobility. In essence, the school in Thailand is merely a sorting device, streaming different ethnicities into different, culturally specific labour outcomes, as Charles F. Keyes has discussed in the case of the Thai Lao – a form of internal colonialism.

But first, the data. In 2011, Thailand recognized 62 ethnic communities as part of its Country Report to the Committee Responsible for the International Convention for the Elimination of All Forms of Racial Discrimination. Population estimates are possible due to the Country Report’s main reliance on Mahidol University’s ‘Ethnolinguistic Maps of Thailand Project’ data. From this data, a map of Thailand’s provinces by majority ethnicity (meaning >50%) can be created. 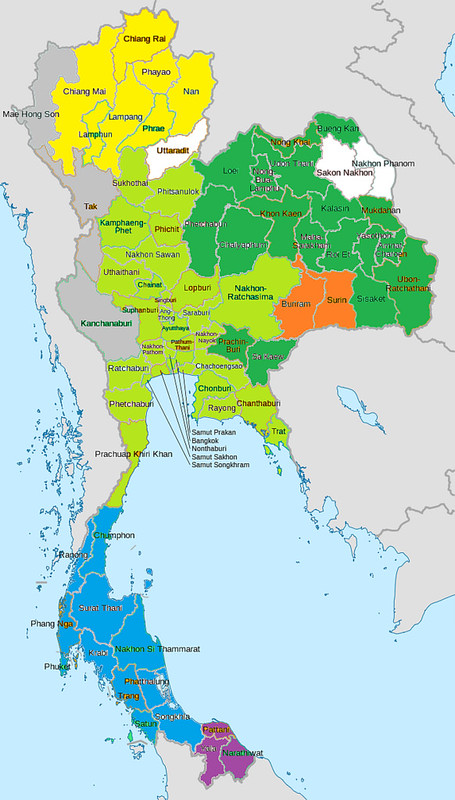 This allows us to look at Thai Language Subject results by ethnicity in Thailand, using 2013 data: 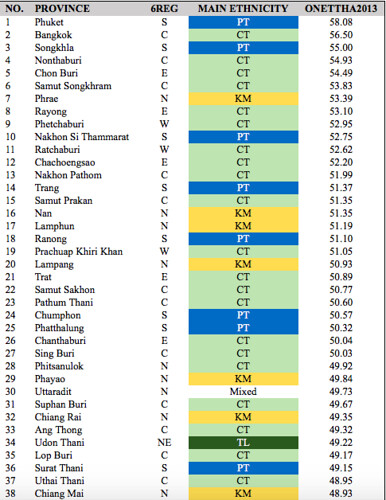 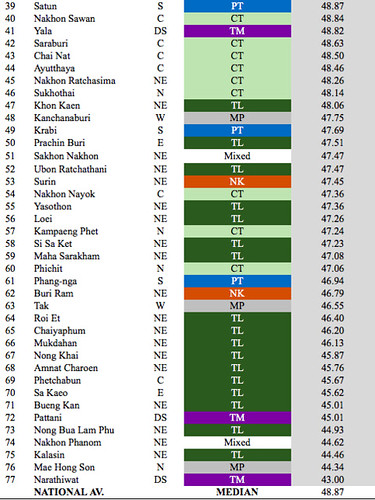 Here are the key findings:

0.0% of Uplands Minorities provinces are above the median (median score = 46.55)

As can be seen, the children of the majority of Thailand’s ethnic minorities score low, with the majority below the median, except in the North. One term for the associated phenomenon, following Dell Hymes, one of the first sociologists, is ‘linguistic deprivation’:

This has been recognized as a problem for the Thai Lao of Northeast Thailand, the most numerous low-scoring ethnic minority, ever since the Thai school system was introduced as a replacement for the traditional Lao temple-based education system in the 1900s and formalized in the 1921 Primary Education Act.

Unfortunately, linguistic deprivation results in stereotyping by the majority culture. One Siamese official in the 1900s noted, “The populace of [Isan] circle are uncivilised and stupid. They have not yet attained the ability to behave according to the established customs and practices of the inner towns.” A 1914 gendarmerie tour inspection came to a similar conclusion: “They could only give rough answers, because the people of this circle are stupid and do not speak [Thai] lucidly.” Similarly, a Ministry of the Interior’s deputy’s tour in 1926 noted, “In those [Lao] towns the populace live in impoverished conditions, and they appear to be blithering idiots as well. Their level of education is still lower than our own.”

In the 1960s, after 40 years of mandatory primary education, in the Northeast “more than 59 percent of those who left school (or never attended it) cannot comprehend the simplest material at the grade 1 level”, with many of those who graduated Grade 4 within the previous 5 years even failing the Grade 1 test. The present 97-98% Thai literacy rate is based on graduating Grade 4 and would likely be much lower, especially for ethnic minorities, if actually tested. This may be why it is never tested.

Unfortunately, a lack of academic success in Thai and in all subjects taught in Thai may be misconstrued as a wider ‘cultural deprivation’ or ‘deficit’. This is systematic stereotyping of entire classes or minorities as being uneducable, having a diminished capacity for abstract thought, some form of cultural dissonance, or a form of inferiority compared to the mainstream culture, as is evident in the above quotes. Culturally deprived people may be characterized as demonstrating

Prince Siphichai’s 1926 inspection tour is a classic example of this viewpoint of the Thai Lao population, as when the report stated, “a rather large number of them are ethnically Lao, who are still lacking in civilisation, and are unambitious and narrow-minded.”

This kind of systematic stereotyping of ethnic minorities because the state education system ignores their needs is morally abhorrent. As dynamic assessment indicates, development should be tailored to individuals’ actual learning and potential learning, and individual attributes include mother tongue. While the state should of course teach the national language, not employing the mother tongue is wasting a resource, especially in the case of transboundary languages, i.e., Karen, Northern Khmer, Thai Lao, and Thai Malay. In the case of the Thai Malays, a bilingual approach starting with Thai Malay and bridging to dual language should be used – and tested on in the O-Net. In the case of the Thai Malay, the use of Thai Lao should be encouraged in the early years, again depending on the language patterns of the community (with differences between the rural and urban to be expected), and Thai Lao should be a subject language, tested on tailored versions of the O-Net Thai Language Subject and ultimately tested as a separate language on the O-Net – as should all the major languages of Thailand.

The alternative is the perpetuation of a two-tier system that streams ethnic minorities into culturally determined socio-economic levels. Or, as a former head of Thai military Internal Security Operations Command put it:

Avoiding colonization by Europe simply meant that we colonized our own people. This internal colonialism, in which officials appointed from the metropolis rule and drain the countryside like conquered provinces, has led to obvious differences among the Thai. (General Saiyut Koetphon, former head of the Internal Security Operations Command, 1976.)