Somyot Prueksakasemsuk, a long-time labour activist turned lèse majesté suspect, will be the first non-Korean activist to be awarded a prestigious prize by Korean trade unions.

The Korean Confederation of Trade Unions has announced it will award Somyot Prueksakasemsuk with the Jeon Tae-il Labour Prize to recognise his dedication to labour rights, the Bangkok Post reported.

Kang Yeon-bae, Head of Education and Information for the Korean Health and Medical Workers’ Union, told the Bangkok post that he hopes that the award will support an international campaign to free Somyot from imprisonment.

"For the past two decades, Somyot and I have worked closely together at the International Federation of Chemical, Energy, Mine and General Workers' Unions. He has also brought union members from Thailand to attend workshops in Korea many times. We consider him a good friend to labour movements in the region," the Bangkok Post quoted Kang as saying.

Jeon Tae-il become a symbol of South Korea’s labour movement after committing suicide by self-immolation on 13 November 1970 at the age of 22 in protest of poor working conditions in South Korean factories. His death brought attention to the substandard labor conditions and helped the formation of a labor union movement in South Korea.

Somyot, labour activist and former editor of Voice of Taksin magazine, lost his freedom for publishing two articles in the magazine that were deemed in violation of Article 112 of the Criminal Code, the lèse majesté law. He was arrested in 2011 and has been imprisoned in Bangkok Remand Prison since.

Despite 16 bail applications, the courts consistently denied him bail citing the severity of the charge and flight risk.

On 23 January 2013, the Criminal Court sentenced Somyot to 10 years imprisonment under Article 112, and added an additional year of imprisonment that had previously been suspended from a case of defamation against General Saprang Kalayanamitr. Somyot’s total imprisonment sentence is eleven years.

In September 2014, the Appeal Court upheld the sentence of the Criminal Court. If the soon-to-be-released Supreme Court decision is in line with that of the two lower courts, Somyot faces the remaining six years and four months of his sentence.

Unlike many other lèse majesté suspects who choose to plead guilty to end their trial and have their jail sentence reduced, Somyot has always stood firm and maintained his innocence. 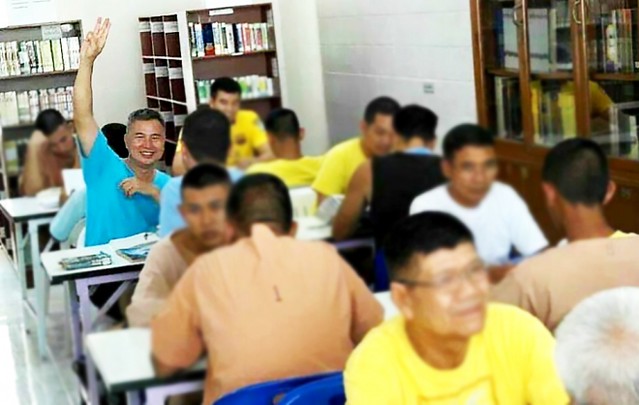 2. Or, Transfer money via Paypal, to e-mail address: serv[email protected], please leave a comment on the transaction as “For Prachatai English”