Embattled villagers in northern Thailand facing an eviction order under the junta’s Special Economic Zone plan have taken the matter to court, saying authorities have illegally reclaimed their land for SEZ construction.

On 1 November 2016, 60 representatives from Wang Takhian Village in Tha Sai Luat Subdistrict, Mae Sot District in the northern Tak Province filed a lawsuit against the Treasury Department and the Department of Lands to the Phitsanulok Province Administrative Court.

The villagers — most of whom are members of Khon Mae Sot Rakthin (KMSR), a local activist group — accused the two state agencies of ‘unlawfully’ preparing to hand over the land upon which they have been living to the Industrial Estate Authority of Thailand (IEAT) for SEZ construction.

Pornphinan Chotawittayanon, a key leader of the group, said that the villagers are not against development. However it is unjust for authorities to hand over the land to the Treasury Department and then to IEAT since most villagers have lived in the area for decades.

She added that most villagers on the land plot have been pressured and intimidated by authorities to move out.

Sumitchai Hattasan, a lawyer representing the group, said the junta’s order about the establishment of the SEZ issued on May 2015 does not state that the Treasury Department is authorised to issue title deeds for the land plot before giving it to IEAT.

In an attempt to drive the Thai economy out of the doldrums, the National Council for Peace and Order (NCPO) issued NCPO Order No. 17/2015 in May 2015, turning large areas along the country’s borders into SEZs where deregulation of industries and tax cuts are offered to lure investors.

Located right on the crossroads between Thailand and Myanmar, nearly 100 families in the small agrarian village of Wang Takhian will be evicted to pave the way for the junta’s ambitious development plan in which nearly 2,200 rai of land will be turned into an industrial estate.

Shortly after the order was issued, public officials together with police and soldiers (both in plainclothes and uniform) began regularly visiting Wang Takhian Village to mark the land plots and urge villagers to move. 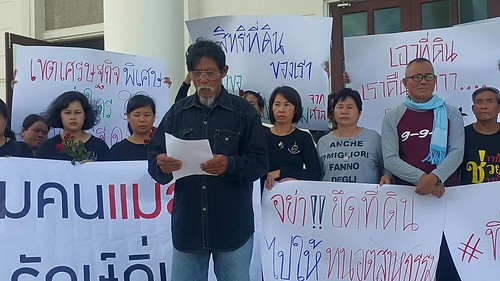