Home » Tales from the Waste Land I: Thai IQ by ethnicity

Tales from the Waste Land I: Thai IQ by ethnicity

"All so that it would be a stronger world

A strong, though loving, world

Imagine a country where the children of one ethnicity die more often, are thinner and shorter, have worse education, where there is less structural development in their area, where most of their taxes go to the other ethnicity, and where they are so malnourished that even their IQs are lower. Then, imagine that the entire socio-political system hides this reality or explains it as fate. One would think one was living in HG Wells' The Time Machine. Actually, you’re in Thailand.

In 2010-2011, the Royal Thai Government measured the IQ of 72,780 Thai students in Grades 1-9. The average IQ was found to be 98.59, slightly higher than in previous studies. IQ levels were found to vary widely throughout the country, with the lowest average of 88.07 found in the Thai Malay majority province of Narathiwat and the highest average of 108.91 reported in the Central Thai majority province of Nonthaburi. In Nonthaburi, 9.5 percent of the children were ‘geniuses’, exceeding the standard of 2 percent. Out of the total surveyed, 48.5 percent were found to have a ‘low’ IQ. Urban-rural differences were extreme.

The Ministry of Public Health has blamed the discrepancies on iodine deficiency, a form of malnutrition, and it stated additional steps would be taken to require that iodine be added to table salt. Director-General of the Department of Mental Health, Dr Apichai Mongkol, stated that the education system was not to blame and that, other than Iodine Deficiency Disorder, which can reduce IQ by 10-15 points, and general malnutrition, the children affected by low IQ needed to get closer to ‘nature’, enjoy greater family warmth (despite division of labour in Thailand along ethnic lines leading to urban migration of parents), and have their parents (often missing) work on ‘brain-stimulating activities’ with them. No, seriously.

The IQ data was robust enough to be included in the 2014 UNDP Thailand Country Report. This allowed an additional level of analysis, showing both provincial and regional averages. The average IQ in Bangkok was 104.5, 101.3 in the Central Region, 100.1 in the North, 96.9 in the South, and 96.0 in the Northeast.

In 2011, Thailand recognized 62 ethnic communities as part of its Country Report to the Committee Responsible for the International Convention for the Elimination of All Forms of Racial Discrimination. Population estimates are possible due to the Country Report’s main reliance on Mahidol University’s ‘Ethnolinguistic Maps of Thailand Project’ data. From this data, a map of Thailand’s provinces by majority ethnicity (meaning >50%) can be created. 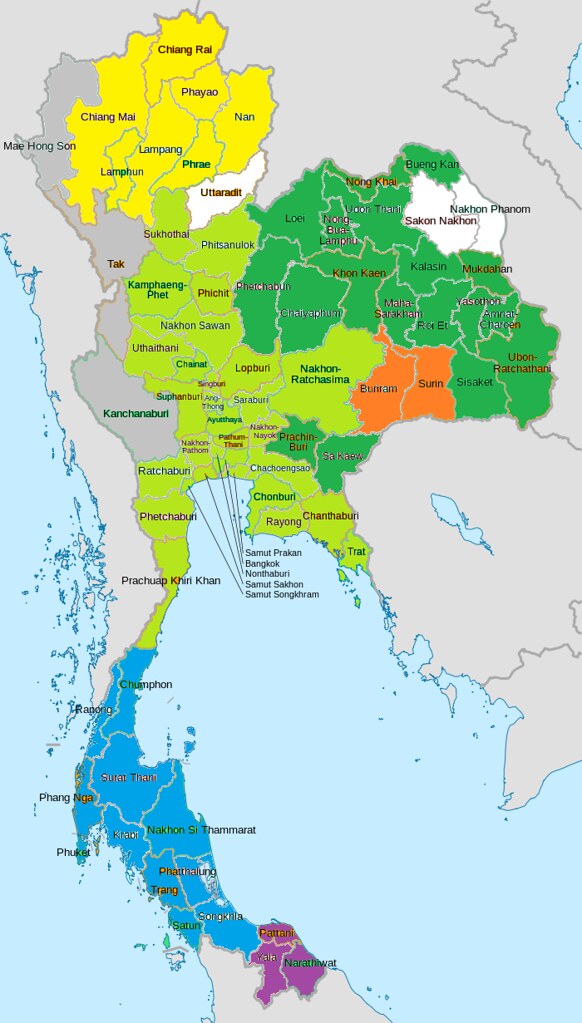 Map of Provinces by Majority Ethnicity

This allows us to look at IQ by ethnicity in Thailand:

66.7% of Uplands Minorities provinces are above the population mean (median = 99.7)

It is unusual to find a country where one ethnic community has an IQ ten points higher than the lowest ranking ethnic community. Genetic variation within the human species is thought to account for 1-2 points. Therefore, genetic variation cannot account for the results. Unfortunately for Dr. Apichai, education does have an effect on IQ. Also, general malnutrition is still a severe problem within some ethnic communities in Thailand, causing stunting (being too short) and wasting (being too thin) in children, as is seen in many African countries. Malnutrition in the womb and in childhood can also harm IQ. In the following preliminary analysis, conducted by the Social Survey Center of Khon Kaen University in cooperation with the Project for a Social Democracy, references are included. This is because of the precision required when analysing IQ.

IQ is important because it predicts future performance in jobs[i],[ii] and, though to a lesser extent, income.[iii] IQ can be affected by diseases of poverty; health and malnutrition, indicated by, for example, low birthweight,[iv] as well as by higher rates of stunting and low weight, which are certainly problems for many provinces in the Northeast and South.[v] IQ is also related to logical mathematical intelligence inculcated (or otherwise) by schooling in the mother tongue (or not). As noted above, it is also related to levels of iodine in salt, which is low in many Thai Lao provinces due to the local practice of using mined salt, not sea salt, and is a known problem for Thailand.[vi] Lack of iodine in a diet causes brain damage[vii],[viii] and, depending on severity, can account for as much as 10-15 IQ points.[ix]

Additional years of upper schooling, more evident in terms of enrolment in upper secondary and vocational, as enjoyed in many Central Thai and Northern Thai provinces, can add to IQ in upper secondary, as much as 3.7 points per year.[x] This may partly explain the higher Northern Thai (Khon Muang) educational attainment and IQ, as well as some of the Central Thai educational attainment and IQ. IQ also correlates with academic achievement, explaining as much as 59% of the variance in mathematics and 48% in language, though as low as 19% in art.[xi]

The inequality of the Thai education system is very clear: IQ predicts school performance with a correlation of about 0.50, accounting for 25% of the overall variance in academic achievement.[xii] And, although the low IQ of the Thai Malay provinces is a known problem, we can see the Thai Lao provinces are also clearly negatively affected by the Thai education system. One complicating factor may be Thai Lao children’s difficulties understanding the language of the IQ test if it was not administered in Thai Lao[xiii] or one of the other 18 ethnic community languages in the Northeast. Thai Lao children’s scores on the Thai language subject on the O-Net national test are amongst the lowest in Thailand. As might be expected from stunting and wasting rates, Southern Thai provinces are also adversely affected. We see what might be ‘expected’ normal distribution for the Mountain Peoples and the Northern Khmer, given their poverty and related malnutrition, etc.

There is no doubt that iodine deficiency is a problem in Thailand. But, so is general malnutrition and poverty. There is something clearly wrong with a country where the IQ in one province is 20 points higher than in the lowest province. There is also something clearly wrong with the education system of that country when 10 IQ points can separate one ethnic community from another. The name for this kind of country is a ‘dystopia’, which literally means "not-good place". A dystopia is “a community or society that is undesirable or frightening” and is “often characterized by dehumanization, totalitarian governments, environmental disaster, or other characteristics associated with a cataclysmic decline in society”.

Welcome to the Waste Land. Now, how do we change it? My tactic is to help start a Social Democrat Party which can get 8-10% of the vote in the next election, thereby deciding the next government, and bring these issues to the fore. We will then solve them in cooperation with international agencies such as Unicef and the WHO, in the process improving Thailand’s collective IQ by about a billion points over the next five years, something that most observers, both Thai and foreign, would agree is an imperative.