An angry mob in the southern province of Phuket has demanded the arrest of a man for posting a Facebook message deemed defamatory of the late King.

At around 11:30 pm on 14 October 2016, a large crowd gathered in front of a soy milk shop in Talat Yai Subdistrict of Mueang District in Phuket and demanded that the owners of shop hand in their son to the police.

The mob accused the son of posting a Facebook message which could violate Article 112 of the Criminal Code, the lèse majesté law, and Article 14 of the 2007 Computer Crime Act, the law against the importation of illegal online content.

The Facebook message is a common Buddhist teaching: “Being born, existing, and dying is normal. Why do you have to be so alert.”

It was posted on the personal Facebook account of the accused on the evening of 13 October 2016 shortly after the announcement of King Bhumibol’s death.

At about midnight, Pol Maj Gen Teeraphon Thipcharoen, Commander of Phuket Police, with about 30 police officers and soldiers arrived at the scene and attempted to pacify the crowd.

He told the crowd that the Facebook message does not seem to violate Article 112 directly, adding the police could make an arrest when the allegation is investigated and seems sufficiently substantiated and after the court grants an arrest warrant for the suspect.

Despite the authorities’ efforts, the crowd was not satisfied.

After about two hours, the crowd agreed to disperse after the intervention of Surathin Lien-udom, former key leader of the People’s Democratic Reform Committee (PDRC) anti-election protest from Phuket.

Surathin took four people from the mob to Mueang Phuket Police Station to file a lèse majesté complaint against the accused.

Pol Lt Col Chao Phomna, Deputy Director of the Crime Suppression Division of Phuket, told Prachatai that the family owning the soybean shop was not at home when it was stormed by the mob.

He added that the police will quickly proceed with the allegation and will collect similar online messages which could be deemed defamatory to the monarchy as Thai people are in mourning for the late King.

In response to the incident, an online campaign on Chang.org titled “Against all forms of violence towards fellow Thais after the Phuket incident” was launched to collect names of people who disagree with witch hunts such as this.

The controversial Article 112 of the Criminal Code or the lèse majesté law states that anyone who “defames, insults or threatens the king, the queen, the heir-apparent or the regent” shall be punished with up to 15 years in prison.

Many people have argued that according to the wording of the law, it does not protect the late monarch. Given the hyper-royalist environment and tremendous grief that many Thai people shared after the recent death of King Bhumibol, many people fear that the law might be interpreted more widely. 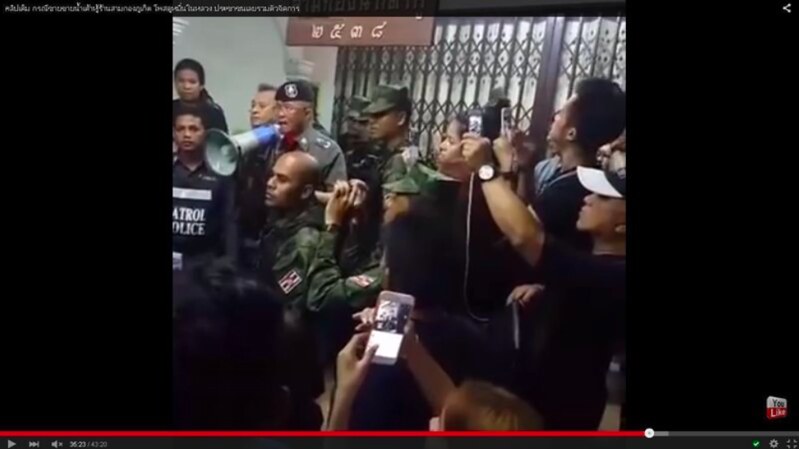