Home » Fate of bill against enforced disappearance under military

Fate of bill against enforced disappearance under military 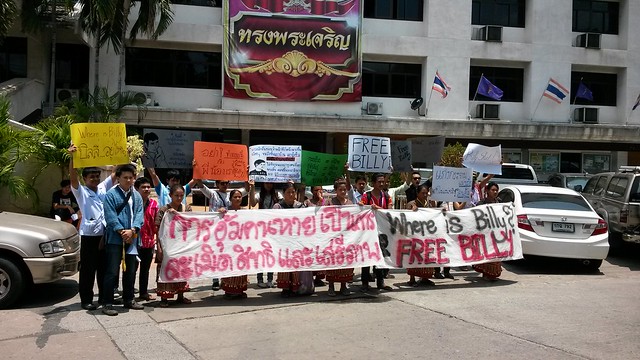 Pinnapa Prueksapan, wife of Porlajee Rakchongcharoen, who has been missing since 2014, said “From the first morning when I reported his disappearance to Kaeng Krachan Police Station, the police refused to accept the report. They said that he had been arrested, and had not been disappeared. So how could he be reported as missing? In the afternoon I went again. The police said they had contacted the National Park chief, who told them my husband had in fact been arrested but he was released the same evening. They hadn’t taken any action taken against him. I asked them how he was released. I am his wife. Why haven’t I seen him come back to his family? They said this was something important that I had to sort out, looking for him and getting information to file a report. Only then would the police start an investigation. In fact I wanted the relevant authorities to help clear up this case and start now.”

Pokpong Srisanit, a lecturer at Thammasat’s Faculty of Law said, “The Supreme Court gave the verdict in 2016 in the case of Somchai Neelapaijit, saying that the victim in an enforced disappearance case means only the person who was abducted. I strongly disagree with the verdict. The Supreme Court is saying that if in future anyone is abducted, only that person is the victim who can file a complaint and pursue a case. A husband, wife, child or close relative cannot do so on her/his behalf and is not a victim according to the meaning of the law as currently interpreted. The Supreme Court took a strict literal interpretation which I say will have very strange consequences, in that state authorities will not release anyone they have taken, because that person once released will file a complaint and they will be charged. If an enforced disappearance happens, even if it is witnessed in the middle of a market, and despite the fact that there are witnesses, no one can initiate a legal action because the victim disappears, according to this very narrow interpretation of the Supreme Court.”

These two statements reflect the serious human rights violation in enforced disappearance, as regards the law, the implementation mechanisms of state officials and the ideas of those in the judicial system. 30th August is the International Day of the Disappeared, to remember those who have been disappeared as the consequence of human rights violations, war, state suppression or terrorism, which occurs in many countries and creates many victims and deaths. So it is the right time to understand the draft Prevention and Suppression of Torture and Enforced Disappearances Act which has been sent to the Council of State for review. This law is necessary to create a mechanism to deal with enforced disappearance, which is likely to occur at the hands of state officials.

The content of the draft law discussed here should raise concern whether the bill will be struck down or considered in an accurate way, considering the current political context in Thailand and who holds power.

101 Thais have been disappeared

Boonthan Tansuthepverawongse, Secretary-General of the Campaign Committee for Human Rights, said the UN Working Group on Enforced or Involuntary Disappearances found many enforced disappearances in Asia: 625 in the Philippines, 81 in Thailand, 163 in Indonesia, 1 in Cambodia, 2 in Lao PRD, 2 in Myanmar, 428 in Timor Leste, 459 in Nepal, 5 in Bhutan, 354 in India, 151 in Pakistan, 37 in China, 20 in North Korea, 135 in Bangladesh and 5,731 in Sri Lanka. These are aggregate numbers over many years.

“In Thailand, the Subcommittee on Civil and Political Rights of the National Human Rights Commission has collected information since 1991, beginning with the case of Thanong Pho-an, former President of the Labour Congress of Thailand, who was disappeared on 19 June 1991 after the National Peace Keeping Council (NPKC) took power, up to the case of Porlajee or “Billy”.  There are 79 cases involving 100 persons. If we include the case of Den Kamlae, the total is 80 cases and 101 people. The fate of the disappeared is unknown. Even if there is clarity, as in the case of Somchai Neelapaijit, there is still no criminal accountability. This is something that reflects how seriously and sincerely the state has dealt with these cases since 1991 to the present.”

Every minute must be counted

This is reflected in the substance of this draft bill. Angkhana further said that a case of enforced disappearance will end when the location and fate of the disappeared is known. Secret detention or murder will mean that that person is considered to have been disappeared until the location and condition of the person is known. Only at that time does the time frame of the case begin, even if this takes 50 or 70 years.

An important question is if this law passes, will it apply to cases of enforced disappearance that occurred before it comes into force.

Pokpong explained that criminal penalties cannot be applied retroactively. This is a fundamental human rights principle, equal to protection against torture and enforced disappearance. So a bill cannot be used retroactively to punish an action before the law comes into force.

“But the nature of enforced disappearance is ongoing. This means that as long as state authorities detain someone they have taken, and do not release them or disclose where they are detained, every second, they are guilty. So even if the officials detained a person 10 years ago or 5 years ago, and still have not disclosed their whereabouts, if the law is enacted today, the officials are guilty today. This is different from retroactive application of the law because the violation of enforced disappearance is still ongoing.”

Pokpong told Prachatai about a case of enforced disappearance which may have been by state officials in the 3 southernmost borders province and where compensation of 7.5 million baht has been paid.  May it still be possible to prosecute the officials according to this law?

“As long as there is no disclosure, it is still considered an offense. It is still possible to prosecute this case because the offence of enforced disappearance is still an ongoing violation. If you abduct a person and have not disclosed their whereabouts, it is still an offence.”

Fear that the Bill could be dropped or distorted

Looking at the content of the law and the situation of enforced disappearance in Thailand, observers are wondering if the law can be passed or if it will be passed without the principles being distorted.  There have been continuing signs of this since the law was drafted.

Pokpong, one of those who drafted the bill, revealed that during the drafting process, it was specified that the Committee created by the law would include representatives from both the government and civil society. Two members of victim’s families would be represented. This would give important force to helping victims and their relatives in the future and reflect the issue of enforced disappearance to other Committee members. But this content was removed.

“We have to maintain the Committee’s investigative powers, because if the persons responsible for an enforced disappearance and the investigators are from the same agency, the chances of the case proceeding normally are small. There were attempts to limit the Committee’s authority to policy-making and give the active role to the normal state agencies. I strongly disagree because this issue requires neutrality. Those accused of this offence are state officials and, in some cases, high-ranking officials. If a normal agency is brought in, I am afraid that there will be orders from above.

Boonthan also said, “I have heard a rumour that at a meeting of the Council of State there was a debate about this law with respect to Article 34 which names the Rights and Liberties Protection Department of the Ministry of Justice as the Secretariat of the Committee. But there was a dispute that it should not be the Rights and Liberties Protection Department but should be Department of Special Investigation (DSI) or even the RTP (Royal Thai Police). This is important. The Committee must be independent. But the secretariat is important to ensure impartiality. If the secretariat is accountable to organizations that may be accused or have an interest in a complaint, this may distort an investigation.”

The exception to the law is Article 44:

Prachatai asked if the use of this bill can be overridden by other laws such as Martial Law or the Internal Security Act 2008. Pokpong explained that this bill has the same force as other acts. It cannot override the operational process of other legislation. For example, if the narcotic control law allows competent officials to detain a person for the maximum period of three days without charge, the officials can still do that, but they must inform the detainee’s family of the location of detention.

Pokpong said the only way to override the bill in the present context is Article 44 of the 2014 Interim Constitution.

In the unrest in the three southernmost provinces, where it has been questioned by society whether state officials, particularly the military, have been responsible for torture and enforced disappearance, and looking at who holds power in the Thai political context and who selected those who will raise their hands to enact the law in the national assembly, it makes one wonder if the Prevention and Suppression of Torture and Enforced Disappearances Act can be enacted.