Anti-mine activists in Isaan, fired back against a mining company, demanding the company 3.18 million baht for judicially harassing them.

On 12 September 2016, about 30 members of Khon Rak Ban Koed (KRBK), translated as ‘People Who Love Their Home’, attended a hearing at Loei Provincial Court, the Thai PBS reported.

The hearing was held to consider the KRBK’s request not to pay the court fee in a civil lawsuit they filed against Tungkum Company, a gold mine operator in Loei.

Tungkum accused the local anti-mine group of defaming the company for putting up large banners with the message “This village does not want mines” and “Close the mines for [environmental] restoration” around villagers in  Wang Saphung.

The mining company then demanded the six key members of the KRBK to pay 50,000,000 baht in reparations together with 7.5 per cent interest.

On 30 March, however, Loei Provincial Court  dismissed the charges against the KRBK members.

This is the first lawsuit filed against Tungkum Company by the KRBK.

On the contrary, the mining company has filed in total 19 lawsuits against KRBK. However, the company has withdrawn 8 lawsuits after a settlement with the group in exchange for allowing the company to transfer some of the ore which had already been mined.

The two were convicted for their involvement in an incident called ‘Black May’, which occurred on the night of 15 May 2014.

In the incident, about 200 armed men dressed in black stormed a checkpoint leading to the controversial gold mine of Tungkum in Ban Na Nong Bong Village in Wang Saphung in an attempt to transport mineral ore from the mine.

The unidentified men at that time assaulted the villagers, used guns to intimidate them and held some of them hostage.

Among the assaulted villagers were Suraphan Rujichaiwat and Samai Pakmee, key leaders of Khon Rak Baan Koed (KRBK), translated in English as ‘People Who Love Their Home’, a local anti-mine activist group in Wang Saphung District. 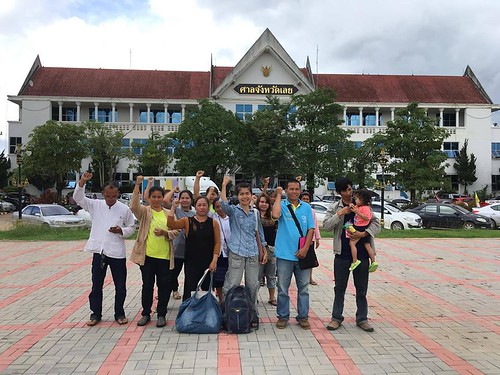