A well-known anti-junta activist from Isaan, Thailand’s northeast, arrested one day before the referendum, has vowed not to request bail and to go on hunger strike to point out the broken justice system in Thailand.

The Provincial Court of the northeastern province of Chaiyaphum on Monday, 8 August 2016, granted permission to the police to detain Chaturapat Boonyapatraksa, 25, and Wasin Prommanee, 20, youth activists from the New Democracy Movement (NDM).

Police officers and soldiers arrested the two on 6 August at a market in Phu Khiao District of the province while they were distributing NDM anti-constitution flyers. They are accused of breaking Article 61 of the controversial Public Referendum Act.

They are also accused of violating Announcement No. 25/2006 of the Council of Democratic Reform (CDR), the 2006 coup-makers, for refusing to cooperate with police to put their thumbprints on police documents.

The court later granted 150,000 bail to Wasin. However, Chaturapat refused to request bail and vowed to go on hunger strike. He started the hunger strike at 10 am on Sunday, 7 August.

Chaturapat told Prachatai that he believes that he did nothing wrong and wants to show the broken justice system in the country.

According to Wibun Boonyapatraksa, Chaturapat’s father, both at first wanted to carry out civil disobedience against the authorities by refusing to request bail, but Chaturapat convinced Wasin to ask for bail since he is still a university student.

Wasin said that he joined Chaturapat in distributing the NDM flyers because they only wanted to make people aware of the referendum and the content of the junta-backed draft constitution.

The two activists wrote a joint letter about the results of the 7 August referendum saying that they respect the decision of the majority in voting to pass the draft constitution, but do not respect the legitimacy of the Thai junta.

They added in the letter “this does not mean that we accept the dictatorial power of the regime. Public participation means not only a public referendum, but also that people must participate in the process of drafting the constitution.”

Under the controversial Article 61 of the Referendum Act, anyone who publishes or distributes content about the draft constitution which deviates from the facts, contains rude and violent language, or threateningly discourages voters from participating in the referendum, could face up to 10 years imprisonment, a fine of up to 200,000 baht and loss of electoral rights for five years. 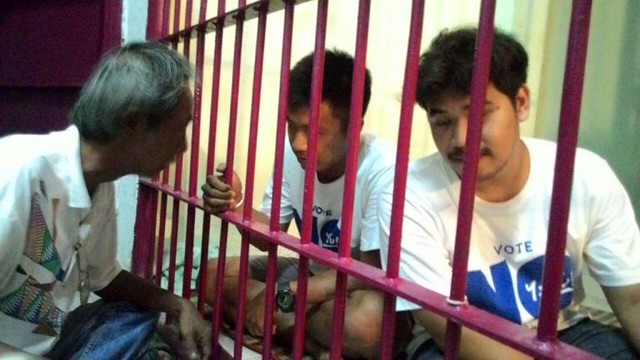