The Thai authorities have searched the homes of leading anti-establishment red shirt figures in northern Thailand in the hunt for the persons who sent letters criticising the junta-sponsored draft charter.

Soldiers and police officers on 15 July 2016 searched the home of Ratchanon Rotchawang, a local red shirt leader in Hang Chat District of the northern province of Lampang, for evidence related to letters which contained material allegedly distorting the facts about the draft constitution, the Manager Online reported.

The authorities found no evidence which could link Ratchanon with the letters. However, they took his fingerprints to check against those on the letters.

On the same day, soldiers from the 32nd Military Circle of Lampang searched the home of Thamonwan Chinakun, another red shirt in the province, and took her fingerprints.

Both Ratchanon and Thamonwan told the authorities that they were not involved in sending the letters.

Manager Online added that earlier on 13 July the authorities searched the house of a leading member of the United Front for Democracy Against Dictatorship (UDD), the main red shirt faction affiliated with Thaksin Shinawatra, in Chiang Mai Province.

Since last week, the Thai authorities have been in search of whoever sent at least 10,000 letters which were confiscated from several post offices in Lampang and Chiang Mai provinces.

According to the authorities, the letters, with no name for either the recipient or sender, contained material campaigning for a ‘no’ vote against the draft constitution as the public referendum on the constitution is drawing near.

Pol Col Nikhom Khrueanopharat, Superintendent of Mueang Lampang Police Station, told the media last week that the police are currently investigating CCTV footage around the post-boxes where the letters were posted and are also collecting DNA samples from the letters in an attempt to identify the senders.

Under the controversial Article 61 of the Draft Referendum Act, anyone who publishes or distributes content about the draft constitution which deviates from the facts, contains rude and violent language, or threateningly discourages voters from participating in the referendum, could face up to 10 years imprisonment, a fine of up to 200,000 baht and loss of electoral rights for five years. 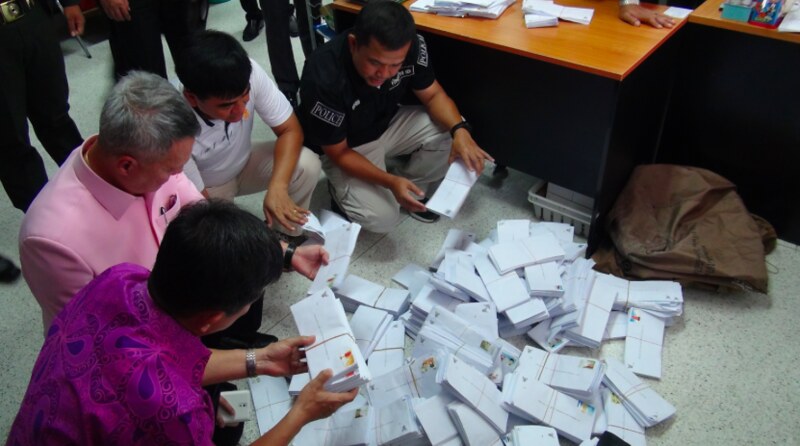