Police have charged activists for violating the public cleanliness act by posting messages on post-its for the eight abducted junta critics while a few were interrogated for participating in the same activity.

At 10:28 pm on Sunday, 1 May 2016, police officers from Thungmahamek Police Station, Bangkok, released Sirawit Serithiwat, a student activist from the New Democracy Movement (NDM) and Resistant Citizen Group, and Thitaree Autthayanukulsirikun, after they were taken away from a gathering with many others at Chong Nonsi BTS station on Sunday afternoon.

The police charged the two under the 1992 Act to Maintain Cleanliness and Order of the Nation. However, the two denied the accusation and refused to acknowledge the charge. The authorities said that they could be fined up to 10,000 baht if they are found guilty.

The two were detained and taken to Thungmahamek Police Station at around 4:40 pm only half an hour after they arrived at Chong Nonsi BTS Station where more than 60 police officers awaited them and others before the activity started.

Before arresting Sirawit, police officers surrounded him in an attempt to prevent him from staging the activity despite the fact that he told the officers that he merely wanted to stand still. After he was surrounded and led along the walkway by the police, Sirawit then distributed post-it notes and asked people to write messages to show solidarity with the eight abducted junta critics.

Many people then wrote messages on post-its and attached them around the venue. When the police told them that they could be charged for littering in a public space, some of them attached the messages to themselves.

An officer from the UN human rights office was also present at the event as an observer.

At around 6 pm, about 80 people, including Anon Nampa, a human lawyer volunteering for Thai Lawyers for Human Rights (TLHR), Pakorn Areekul, a NDM activist, and another well-known anti-junta figure referred to as Champ 1984, arrived at Thungmahamek Police Station to support Sirawit and Thitaree.

Pakorn and Champ were interrogated briefly by the police, but were released without charges. 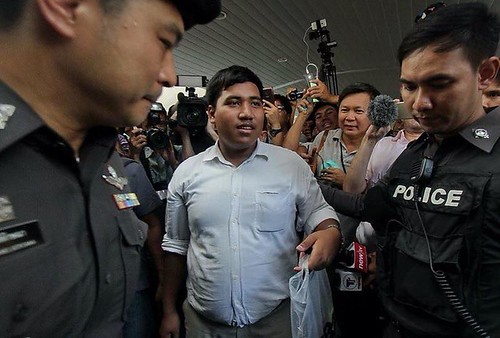