Thailand’s head of the team engaged in peace talks with the Deep South independence movements says last month’s siege of Cho-airong Hospital shows disunity among the movement. However, this disunity will benefit Bangkok.

The siege of Cho-airong hospital on Sunday, 13 March 2016, amid news of significant progress in the peace talks has raised questions about MARA Patani, the umbrella organization of the independence movements. The most common question is whether Bangkok is talking to “the real one.”

Prachachat Business published an interview with Gen Aksara Kerdphol, head of Thailand’s peace talks team on Saturday, 19 March 2016. As MARA Patani has announced, Aksara said the peace talks will continue as they are, adding that the government has a new strategy to gain support from the local people. Prachatai English translated the interview into English. 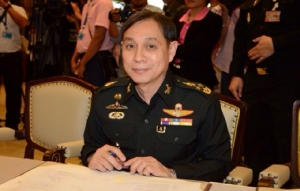 Every time violence occurs in the deep south, how do you feel?

Everyone is complimented for doing well. Only the peace talks team is not doing well. There’s more than just the head of the peace talks team. We have the Secretary-General of the National Security Council (NSC), the Secretary-General of the Southern Border Provinces Administrative Centre (SBPAC), representatives from Army Region 4, representatives from the Royal Thai Army and the National Intelligence Agency (NIA). We all work together.

It’s like we are going along alright and someone is splashing water at the corner of a building and I pull them out of the corner. There’s the one splashing water. But then people ask why I pulled them out, why I promoted them like that. But previously no one said anything. I pull them out to make them accountable and responsible. I don’t see any condemnation. But people say that the peace talks are no good, there are bombings.

That’s not correct. Now people have to support the peace talks and reject violence and terrorism. There are various groups who claim that they are for the people but there are casualties and losses. Is that right? It depends on who the people believe and who they choose.

Do you believe that people are all now siding with the state?

If not with us then with who? Are there people on the other side? There are only people with extremist ideas and bombings and shootings. There are extremists and they won’t compromise.

Does violence occur in the area because the peace talks have not succeeded?

I think it’s better to talk than not talk. Tell us what they want. Before the bombings, they didn’t come and tell us what they wanted.  This time we can ask.  Now they have come out. If it fails, how can only the leader make it fail? Are the NSC and Army Region 4 and the Army doing everything OK?

Is there still unity in the negotiating team?

This policy is the PM’s to solve the problem through talks so he appointed the talks team. Everyone involved must support it because it’s government policy. It’s not the policy of General Aksara Kerdphol alone.  The NSC Secretariat, the SBPAC Secretariat, Army Region 4 and the NIA are all in this and behind me. Should they express their opinions when they are in the same team?

Our team is part of state security. I meet the talks team every day. Does anyone think differently? I tell them to quickly raise their hand. I will transfer them elsewhere.

Is being a soldier a restriction in the peace talks?

We are the side that has not harmed anybody. We need peace and so do the people. Who needs violence? Who has demands? Who has conditions? It’s not our side. The government says what it wants. It wants justice; it wants jobs, it wants development and we do it all. Ask if the side that uses violence will do this. No way. But the ones doing it are the government. The days of having the military drive them out are gone.

Now we are using the power of the people to drive the perpetrators of violence out of their villages. If the military go in they have to knock on every house door. And the next thing there are cases of human rights violations again.

What progress have the peace talks made?

The peace talks form one of seven working groups to find a solution to the conflict. The peace talks will help the 6 other working groups who were working previously have greater clarity by asking the insurgents what they want. The 1-2 earlier proposals of the insurgents which the 5th round of peace talks will deal with are only administrative issues, because the insurgents don’t have anything at all.  They want to frame some rules relating to transportation, who arranges the meeting venue for the talk, and who will be responsible for food. Both we and the mediator have agreed only on the administrative issues, not on a ceasefire on the ground. We do not want to make it an international security issue because it’s our internal security issue.

In the next round of talks, what proposals will the government side submit for agreement?

We need safe zones for 3 or 6 months. If we can choose them ourselves, the zones must be where there are incidents. But if the insurgents choose, they will want to choose the zones under our responsibility where they aren’t doing anything.

In the 3 southernmost provinces, there must be safety in all 38 districts. It’s the army commander’s job with the provincial governors and the Secretary-General of the SBPAC, to look after safety in all 38 districts. Our proposals are not what the peace talks team thinks, but come from what the people in the area need. Go and ask the other side if the people want safe zones, if they want development. Do you want the same development that the people need? You propose something and we will go and ask the people.  Because we’ve already asked them what they want. Do you want to come back to the justice system?  Because some people have arrest warrants, they have cases. We will take care of that directly for them, from hard to soft, but it cannot be more than the law.  We will ask that side, ‘Do you agree? Do you want anything first? Do you have anything to add?  Do you need anything?’  They want safety zones as well, right? They need justice. They need development. They need jobs. They need large-scale investment.

What are the indicators that say there is trust in each other?

There must immediately be no incidents or violence in the area until we have confidence.  Because there is still the suspicion whether you are real or fake, if there are still incidents like this, we cannot trust them.

Are the insurgents you are talking with the real ones, do they have a real voice?

Go fetch them then. Are you saying there are other people? Before going to the peace talks, we first made a list of insurgents in the area and we have to check with them again if the list that we know and the list that Malaysia knows are the same and compare them. The names of insurgents on our list come from data from the National Intelligence Agency, the Police Ordnance Division, Internal Security Operations Command (ISOC) and this is examined again by ISOC Region 4, the governors and religious leaders until everyone is confident that the list is really the insurgents. So we sent it all for Malaysia to examine if they know anyone. Malaysia checked it and came back with the answer that the list they checked is completely identical. So we invite them to talk but before they can come, there are people saying that this lot we are talking to, well, they’re fake. The real ones haven’t talked. So where are these real people of yours? Just reveal their names and where they all are and are there others besides these? There are none. The names they give are all on the list. Right now the cast is complete, people making problems, people solving problems. This is not something you can brag about a lot because there are people waiting for it to collapse.

Does the recent incident [the siege of Cho-airong hospital] show the disunity of the peace talks group?

They don’t have unity. Being loosely gathered together is good; unity is bad because we can build bargaining power.

Is there a need for autonomy?

What year is this? Is there anyone still talking about this? Have you heard it? We passed beyond the old context.  I have talked to the BRN insurgent group. The time is up, we’re beyond that stage, because the soldiers do not enter the villages. We are getting the people to drive the bad people out of the villages. Now we’ve reached the stage of the voice of the people in the area who will be the people to determine peace in the southernmost provinces.

At what stage can we make an agreement about a ceasefire in the area?

I am convincing them but we have to build confidence between the two sides first by not having any bombs in the region. I am reaching the point of trusting them.  It has not reached a ceasefire agreement.  They are not negotiations for peace but just negotiations for clam.  We are just the ones leading them by the hand to ask what they want.  They have their own people.  So the two sides must talk only about good things.

After confidence-building, what is the next step in the road map?

After we have passed the period of confidence building without any bombing incidents, it will be safe.  The people will think the same.  We will reach the point of joint agreements and in the future we will make a roadmap.  All the answers are with the people.  It will span and go beyond conflict between the state and various insurgent groups.

It is like political conflict now where this government has intervened and asked the PDRC and UDD who were suing each other in court to stop. It came to this. The court decided everything. They have to compensate for the damage done. Do you want to go back to this? Why ask what the PDRC and UDD want. We’re past that. There’s going to be elections. Why ask them?

How many talks have there been so far?

We talk all the time, both formally and informally, online messages (texts), phone calls, but talking round a table is not often. It wastes money on plane fares. We go when we’re sure there’ll be a deal. That’s when a meeting is scheduled.

What are the achievements of the peace talks team today?

It’s success that we are still talking because this is the only way to resolve the conflict. The fact that the peace talks are still going today is the reality. Everyone claims to be working for the people. We want to say that the people do not want violence, they need peace. We have to reject violence in all form, from all sides.