Loei Provincial Court has dismissed a civil lawsuit filed by a gold mining company against key leaders of an anti-mine group.

The Provincial Court of the northeastern province of Loei on Wednesday, 30 March 2016, dismissed charges against six key members of Khon Rak Ban Koed (KRBK), translated as ‘People Who Love Their Home’, an anti-mine group comprising villagers from six villages in Wang Saphung District of Loei.

In 2015, Tungkum Company, a gold mine operator, filed a civil lawsuit against KRKB members shortly after they put up a large banner with the message “This village does not want mines” in front of an entrance to the village. At that time, the group also attached small banners with the message “Close the mines for [environmental] restoration” around the village.

Tungkum claimed that the messages affected the reputation of the company and demanded that the KRBK members pay 50,000,000 baht in reparations together with 7.5 per cent interest.

According to Theerapan Pankhiri, defence lawyer for KRBK, the Provincial Court ruled that the villagers of Wang Saphung have been affected by the mining operations and the villagers have the right to state their stand against the company.

The verdict was cheered by about 60 villagers of Wang Saphung who came to the Court to give moral support to the embattled KRBK members.

Tungkum Company has filed in total 19 lawsuits against KRBK. However, the company has withdrawn 8 lawsuits after a settlement with the group in exchange for allowing the company to transfer some of the ore which had already been mined.

In May this year, the court will read the verdict on an incident which the villagers call ‘Black 15 May’.

In the incident on 15 May 2014, villagers in Ban Na Nong Bong, one of the villages in Wang Saphung, were beaten up by 300 armed men and a leader of the KRBK then reported that they also received death threats from people believed to be working for the company.

The conflict between Wang Saphung villagers and Tungkum has been ongoing for many years.

Tension between villagers and the company reached a peak in September 2013 when the villagers barricaded the mine entrance, blocking trucks, each of which normally carries 15 tons of cyanide waste, from passing through their villages. Although the sound of the machines disappeared and the sound of chirping birds returned, the villagers had to live in fear of judicial harassment, thugs, gunmen and death threats.

Currently, Tungkum Company has halted mining operations since mid-2013. However, the company is currently trying to get permission from the authorities to renew the mining concession in Wang Saphung District. 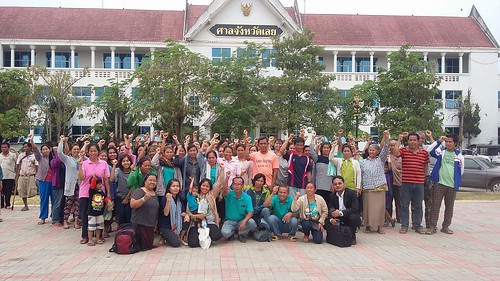