Villagers in northern Thailand facing eviction have denounced the seizure of land by the authorities for industries in a Special Economic Zone (SEZ).

About 70 representatives of villagers from Tha Sai Luat Subdistrict in Mae Sot District of the northern province of Tak and a local environmental group called Khon Mae Sot Rakthin on Tuesday, 22 March 2016, submitted a petition to Amonphan Suntharawiphat, a Land Department official for Mae Sot District of Tak.

The petition states their opposition to the seizure by the authorities of land for the construction of an SEZ in Mae Sot, saying that 97 families are affected by the measure and the plan may cause environmental degradation in the area.

According to the current plan, two plots of land in Mae Sot are now being expropriated and cleared for the SEZ. The first is about 2.2 sq.km and the second about 1.3 sq.km. The authorities stated that the expropriated plots are vacant public land. But many villagers have been using the area as farmland.

The land was previously designated as a protected area. However, this status was revoked and the land given to the Treasury Department in May 2015 for the SEZ.

The villagers claim that they have been settled in the area since 1927 and that most of them possess Land Utilisation Certificates (NS2 and NS3) and the Land Claim Certificates (SK1) for the plots.

Sunthon Sibunma, a key leader of Kon Mae Sot Raktin, told Prachatai that many military officers visited the villagers on the disputed land and tried to convince them to leave the area, but they have nowhere to turn to since the state has so far offered no compensation package or relocation plan.

In a move to shake up a lethargic Thai economy, Gen Prayut Chan-o-cha, Prime Minister and head of the junta’s National Council for Peace and Order (NCPO), in May 2015 invoked his authority under Section 44 of the Interim Constitution, which gives the junta absolute power in maintaining national security, to announce NCPO Order No. 17/2015. The order mandates turning large areas in Tak, Mukdahan, Nong Khai, Sa Kaeo and Trat provinces, bordering Myanmar, Laos, and Cambodia, into Special Economic Zones (SEZs), where deregulation of industry and tax cuts are offered to lure investors.

Many communities in areas which have now been declared as SEZs are currently facing the same fate as the Mae Sot villagers.

In the northeastern province of Nakhon Phanom, as many as 400 families in At Samat Subdistrict of Mueang District are to be evicted in the name of an SEZ project. 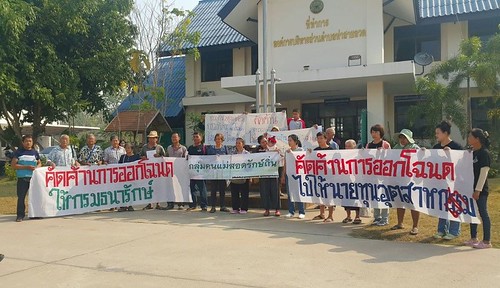