Authorities to use Computer Crime Act to quell charter critics

The deputy head of the junta said that online critics of new charter could be charged under the Computer Crime Act while the Interior Minister said it is necessary to ban political parties from campaigning about the new charter.

According to Matichon Online, Gen Prawit Wongsuwan, Minister of Interior and Deputy Prime Minister, on Tuesday, 16 February 2016, told the media that political parties are still banned from holding party meetings about the new draft constitution.

He said that if it is allowed, political parties might organise such meetings nationwide and the government will not be able to ‘control’ and ‘monitor’ them.

When asked by the media whether the National Council for Peace and Order (NCPO), the formal name of the junta, allows forums about the new charter to be held by civil society groups, Gen Prawit said “Currently, they’re not banned. Who said that they couldn’t be organised? But they can’t be street rallies.”

He then told the media to ask Wissanu Krea-ngam, the Deputy Prime Minister, about the matter.

On the same day, Wissanu urged the Election Commission of Thailand (ECT) to speed up the process of proposing penalties for people who criticise the new charter with distorted information before the public referendum on it.

He suggested that the ECT should use the 2007 Computer Crime Act against critics who distorted facts about the draft constitution.

Under Article 14 of the 2007 Computer Crime Act, persons found guilty of importing illegal or false computer content which could cause damage to a third party or national security, or cause public panic face up to five years imprisonment, or a fine up to 100,000 baht, or both.

According to Thai Lawyers for Human Rights (TLHR), at 1:30 pm on Sunday, 14 February, five police officers in uniform and seven in plainclothes intervened in a gathering of anti-establishment red shirts at a Victory Monument branch of Macdonald’s, Bangkok.

About seven red shirts who participated in the gathering were wearing T-shirts with the message ‘Vote No’ and were distributing stickers with the same message.

The red shirts told the police officers that they only gathered peacefully and did everything in accordance to the law as the Deputy PM said himself that campaigns against the new charter are allowed. However, the police cited NCPO Order No. 3/2015, which prohibits political gatherings of five or more persons.

In the end, the participants decided to abort their activity. 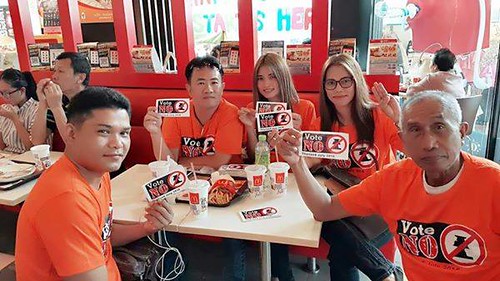