Submitted on Sun, 10 Jan 2016 - 04:28 AM
Metta Wongwat
Phongsak S., the person using the Facebook name “Sam Parr,” is the most recent conviction by the military court under Article 112, the so-called lèse majesté law. On August 7, 2015, he was sentenced to imprisonment for 60 years on the basis of six posts on popular social media site Facebook. As he pleaded guilty, his sentence was reduced by half.
This case is the most severe punishment for lèse majesté in the current era, overtaking the previous case of Yai Daengdueat, who was sentenced by a Bangkok military court to 50 years (also reduced by half following a confession) and Jakrawut, the musician who was sentenced to 30 years in Ubon Ratchathani (again, reduced to half following a confession). As in Phongsak’s case, all of these convictions stemmed from posts on Facebook. 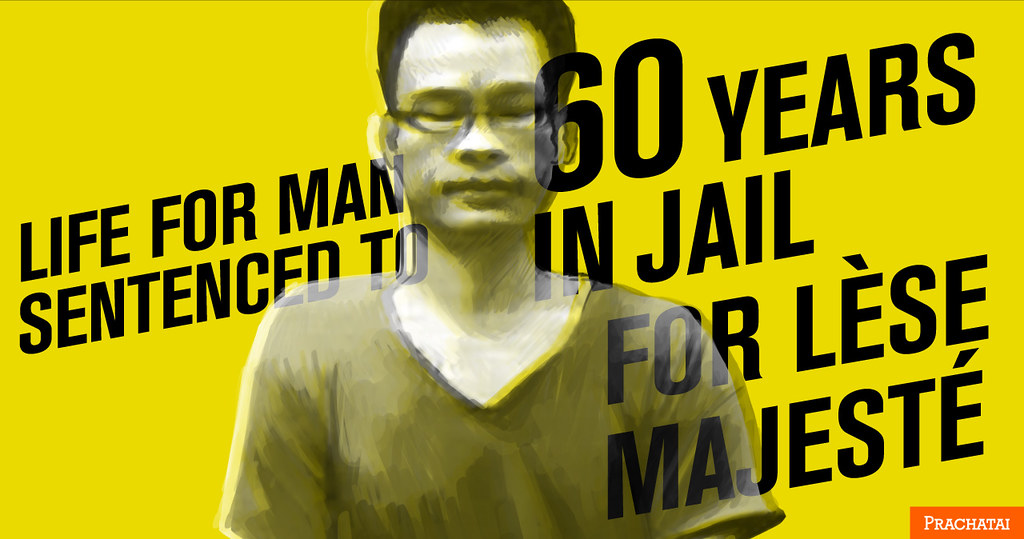 Who is Sam Parr?

Sam (Phongsak) is in his mid-40s, with a  lively sense of humor and an outgoing,  flamboyant personality, fond of speaking English with people who visited him in prison. Originally, he is from Kanchanaburi Province, from an typical lower-class farming family. He left home when he was still a teenager and, since then, has had to look after himself. He was only formally educated up to Mathayom 3 (9th grade), but learned English and French on his own to the point where, now, he speaks English confidently enough that he boasted that he could test better than top university graduates.
How did he come to this point?
Before his arrest, Sam worked in the tourism industry, as a manager of several hotels and restaurants, and as a freelancer in arranging tours for various agencies. He lived for a year in Morocco, working with a guesthouse with some of his foreign friends for a year, and during that time had the opportunity to travel to various European countries before coming home to take care of his ill father and elderly parents.
About his overseas experience, Sam said, “What I’ve seen in other countries is real development. Equality. It made me question why Thailand is still so poor, and why the poor in Thailand are so repressed.”
Later, this question of inequality stuck with him as he saw more of the world. But it wasn’t his first reaction. At first, when abroad, he stuck with his previous conservative ideas.
“I would argue with foreigners about Thai-ness until I almost died from the effort! Or almost to the point of getting into a fight!” He characterized himself at that time as a “salim tua mae” [a conservative bourgeois ideologue].
An important turning point for Sam was the news of the crackdown in 2010. That came during the tourist low season, meaning that Sam had a lot more time to spend on the Internet, closely following the news. The loss of life of so many people was terribly shocking to him, and made him become more and more interested in politics. He began to question things more deeply and began to read more and more, especially reporting in English about Thailand’s political history. Of particular interest were the decisive events of June 1932, October 1973, October 1976, and May 1992.

It was shortly after 2010 that Sam’s father died, and Sam returned home to care for his mother, who was 84 years old and unable to walk. With this heavy responsibility, he was unable to join a political group seriously, and despite wanting to be more involved, was only able to attend meetings two or three times. But what he could do from home was engage with the world of social media. There, he referred to himself as an “independent unit,” and met a number of new friends who had viewpoints very similar to his own, friends he knew online but which he’d never met in person. After the coup, his posts became increasingly strident, up to the point that friends worried about his welfare urged him to leave home. He did so, going to live with friends he had made on Facebook. Later, after Sam’s arrest, this association caused his friend to be detained by the military, with Sam’s presence strengthening the case made against him. Sam said that it was this fact that most upset him.
In the wake of the coup, the questions that he posted on Facebook grew increasingly angry, rude, and Sam made a number of posts while drunk.
“I am so resentful that innocent people were shot dead. The image of these bodies is so clear in my mind. When I think of them, I get so angry that I cannot control myself. And it was even worse when I was drunk,” he said.
“If there was something that I regret, it is that I was not careful in what I was saying. I should have posted better-researched information, using facts instead of feeling,” he said.
When it comes to his imprisonment, Sam, in speaking about the harsh nature of his sentence, said that he was a person who adapts to various circumstances quickly, and has resigned himself even to the prospect of dying in prison. He said he was heartened by the thought that his experience could be taken as an example that Thais could learn from and by the moral support received from his fellow inmates.
Sam was still smiling when he spoke of his own gloomy future. But as he spoke of historical times of suffering and loss, his tears began to fall and his voice quavered.
“On the 6th of October, didn’t you see? That tamarind tree, that chair. That was true cruelty. I would not be able to accept it no matter how many times I'm reincarnated,” he said.
What happened next
Phongsak was arrested on 30th December 2014 (2557) at a bus station in Phitsonalok Province. Both military and police officers were present in large numbers.
Sam has a strong suspicion that at least one person that he connected with on Facebook was in fact an officer who disguised himself and chatted with him to lure him. This person even sent him gifts (including a mobile phone).
He had been speaking with this person on Facebook for four to five months when they finally arranged to meet in person, in Tak Province, the alleged hometown of the person. While Sam travelled to meet the person, the disguised police constantly asked him where he was at each stage. After the arrest,
During the trip, they were in constant communication, with Sam’s Facebook friend, asking, for instance, where Sam was at each stage of the journey, including, significantly, the exact time Sam planned to take a tour bus in Phitsonalok. Sam recalled that after he had been caught, one officer at the barracks greeted him with, “Don't you remember our last message?”
Sam was imprisoned in the army camp for five days before being taken to the police and it was officially announced that “Sam Parr” had been arrested.
He was imprisoned there until his conviction on the 7th of August, 2015, a total of eight months.

Pongsak allegedly posted six posts, including photos and accompanying text, on Facebook under the name “Sam Parr.” These were ruled to be in violation of the lese majeste law. These six actions were:
All of these images and text were in Pongsak’s computer until the day that he was arrested, when they were taken by the military under Declaration 37/2557, which orders that all cases of Article 112 to be military jurisdiction.
According to the indictment, the military prosecutor stated that the posting of pictures and text defamed the monarchy and Article 112 of the penal code, and that the charges also constituted the misuse of a computer system according to Section 14 of the Computer Crimes Act.
The article was published in Thai on Prachatai on 7 Aug 2015 and translated into English by Andrew Alan Johnson
Feature
Andrew Alan Johnson
Article 112
Metta Wongwat
Pongsak S.