The Thai Consulate in Chicago, US, reportedly attempted to prevent overseas Thai students to attend a lecture of a well known anti-junta figure.

According to Pavin Chachavalpongpun, a fierce critic of the Thai junta who is a Thai Associate Professor at the Centre for Southeast Asian Studies, Kyoto University, Japan, the Thai Consulate in Chicago, US, last week attempted to prevent Thai students from attending his lecture at the University of Wisconsin-Madison.

Pavin was invited by the Center of Southeast Asian Studies of the University of Wisconsin-Madison as a guest lecturer to hold a special lecture titled ‘Neo-Royalism Ideology and the Future of the Vajoralongkorn (the Crown Prince) Reign’ on Friday, 20 November 2015.

He posted on his facebook status on 21 November that prior to the lecture, the Thai Consulate in Chicago tried to bar Thai students, especially those who are studying in the US with the Thai government scholarships, to attend his lecture.

“The preparation of my lecture at Madison was quite problematic. The Thai Consulate in Chicago fully acted as an agent of the National Council for Peace and Order (NCPO), warning the Thai students especially those on the Thai government scholarships not to attend my lecture,” wrote Pavin. 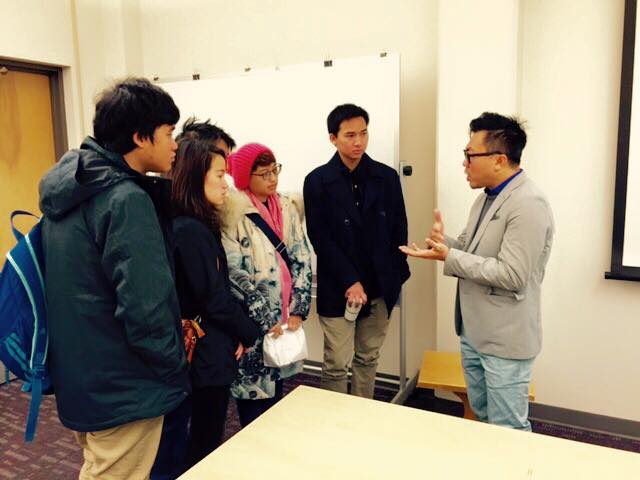 He added that the Consulate requested to have the list of students who planned to attend the lecture and asked if they could report back to the consulate.

In addition, they sent people to ‘monitor’ my lecture, Pavin reported.

“My reaction was, as they prevented the [Thai] students not to come and attempted to shut their ears and eyes, I decided to record my lecture and [will] post it on youtube,” Pavin added in his facebook status.

On 14 July 2015, Pavin reported that The Thai Consulate in Germany threatened to withdraw donations to a German university in Frankfurt for inviting him to talk about Thai politics.

After a heated exchange with the organisers, however, Pavin contacted a group of students of Goethe University who still wanted to participate in the lecture and was able to give the lecture in defiance of the organisers’ policy.

On Wednesday, 15 July 2015, he made a formal complaint to five German agencies, including the German Embassy to Thailand in Bangkok and the Antikorruptionsreferat (anti-corruption agency), asking for an investigation of the ‘misconduct’ of the Goethe University of Frankfurt and the Thai Consulate.

“I am writing to alert you of the possibility that the Department [of the Goethe University of Frankfurt] might have compromised its duty to defend academic freedom in exchange for financial rewards from the Thai Consulate [in Frankfurt],” Pavin wrote in his complaint.

Pavin was among a long list of Thai academics and activists summoned by the Thai junta immediately after the 2014 coup d’état to report to the coup-makers. He, however, refused the junta’s summons and has not been back to Thailand since the coup.