A group of academics at around 10:30 am on Monday, 23 November 2015, submitted a letter to Gen Prayut Chan-o-cha, the junta leader and Prime Minister, demanding the junta stop harassing and intimidating academics.

The letter was signed by about 300 leading academics, such as Anusorn Unno, a lecturer from the Humanities Faculty of Thammasat University, Kasian Tejapira and Prajak Kongkirati, renowned political science lecturers from Thammasat, and Pitch Pongsawat, a political scientist from Chulalongkorn University.

The foreign academics who signed the letter include Duncan McCargo, a political science from Leeds University, UK, known for his research on Thailand, Craig Reynolds, a renowned historian on mainland Southeast Asia from Australian National University (ANU), and Andrew Walker, a lecturer on Southeast Asian studies from ANU.

The letter was accepted by Suksawad Suwannawong, the chief of the people’s service centre of the Prime Minister's Office.

At the event, Anusorn read out the joint statement to the junta leader.

“We maintain that universities are not military barracks, but a place of knowledge to exchange and debate with logic and facts,” read Anusorn. “We maintain that Thailand is not a concentration camp. Thai people have different political thoughts and beliefs.”

According to Prachatham News, Glyn T. Davies, the current US Ambassador to Thailand, expressed concerns about academic freedom in Thailand at the Global Entrepreneurship Week in Chiang Mai on 20 November 2015.

“We are concerned about the summons issued academics. Freedom of expression and of assembly will make Thailand stronger when people can talk, express opinions, and cultivate from it for future of the country,” Prachatham quoted the American ambassador as saying.

Yesterday, a network of 50 academics, physicians, and others from the southern province of Songkhla issued a joint statement addressed to the Thai military government after several academics last week were accused of violating the National Council for Peace and Order (NCPO) ban on political gatherings.

“The citizen network of Songkhla urges the NCPO to stop infringing upon academic freedom. Universities are not military camps,” said the joint statement.

Attachak said that the summons was issued in relation to a joint statement of a network of academics countrywide, which he read out in a public lecture hall on 31 October 2015. The statement urges the Thai junta not to intervene in academic freedom, saying that ‘universities are not military camps’. 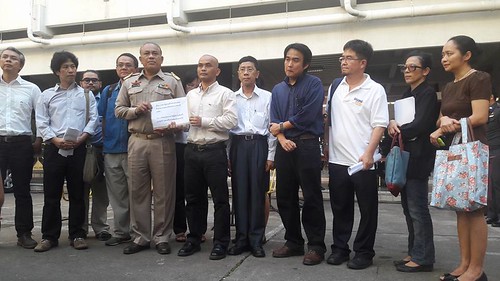 Academics submitting a letter to Gen Prayut Chan-o-cha, the junta leader and Prime Minister, urging the military government not to infringe upon academic freedom (courtesy of Seri Nonthri)