Thai military and police in northern Thailand have summoned and questioned pro-democracy activists, academics, and students to make sure that nothing will happen during the junta’s cabinet meeting in the province.

From 23 to 29 June 2015, military and police officers in Chiang Mai summoned and questioned more than 15 activists, academics, writers, students, and others in the province to make sure that no anti-junta activity will take place during the junta cabinet meeting on 29-30 June 2015.

At around the same time, police officers from the Special Branch, responsible for national security intelligence, went to Chiang Mai University to talk to Somchai Preechasinlapakun, a lecturer in the Faculty of Law, about the junta meeting. 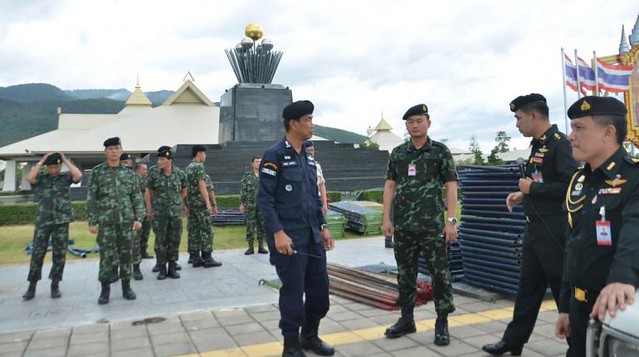 Two police officers in plainclothes also paid a visit to Pipob Udomittipong, an independent writer and translator, to ask about his background and activities. The officers mentioned that they were assigned to make sure that there would be no disturbance at the junta meeting and warned the writer that he will be visited by security officers again if he does not obey.

During the same week, plainclothes officers also visited Nithipong Samrankong, another independent writer in the province, who was summoned for attitude adjustment after the coup, and another local cultural activist.

On 26 June, military officers summoned two members of the Federation of Northern Farmers (FNF) for talks.

Rodjaraeg Wattanapanit, a pro-democracy activist and founder of the Book Republic bookshop in Chiang Mai, and Direk Khongngoen, a key FNF leader, were also questioned by security officers last week regarding the junta meeting.

In addition, several village chiefs and Chiang Mai University students were contacted by security officers at around the same time.

According to Thairath Online, over 2,000 military, police, and other security officers are assigned to quell any anti-junta activities that might take place in Chiang Mai during the junta meeting.

On 25 June, military and police officers in the province participated in a drill in preparation for the upcoming meeting, Thairath reported.