Thai military said the arrest of nine Israelis conducting a training session for Thai police was a misunderstanding, claiming that the military only wanted to get information on the devices used in the training.

According to Matichon Online, 10 armed military officers from the 2nd Cavalry Unit of the King’s Guard at 11 am on Thursday arrested nine Israeli ex-army and police officers while they were instructing police officers on how to use communication interception devices at the Royal Thai Police Headquarters in central Bangkok.

Matichon reported that the army officers cited Section 44 of the Interim Charter, which gives military officers the power to arrest anyone deemed a threat to national security, while arresting the Israelis before bringing them to the headquarters of the 2nd Cavalry Unit for detention.

On Friday, Col Winthai Suwaree, the spokesperson of the junta’s National Council for Peace and Order (NCPO), clarified that the military did not arrest the nine, but only summoned them for a talk after the training because they were interested in information on the interception devices used in the training. 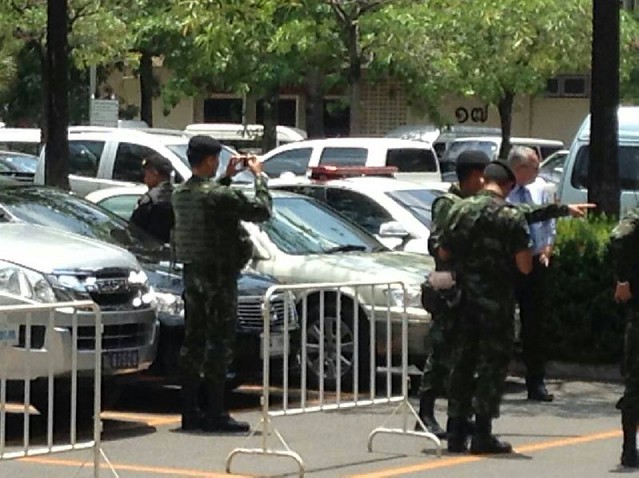 The junta spokesman said that the military already cooperated with the police before dispatching officers to the training session although it was done only shortly before the training.

The military summoned the nine to the division headquarters later only because further details on the interception devices, especially on sources of the devices, had to be discussed.

According to Pol Gen Somyos Pumpanmuang, the Royal Thai Police chief, the military suspected that some of the interception devices illustrated in the training might have been imported without authorisation from the relevant authorities.

He added that the nine Israelis are working for an Israeli company which sells security devices and came to illustrate the products because the police wanted to acquire new interception devices.