30 April will be the fourth anniversary of the deprivation of freedom of the red-shirt political magazine editor, sentenced to 10 years in jail for articles he did not write. His wife has been very supportive and became active campaigner against Article 112

Continue from Part I 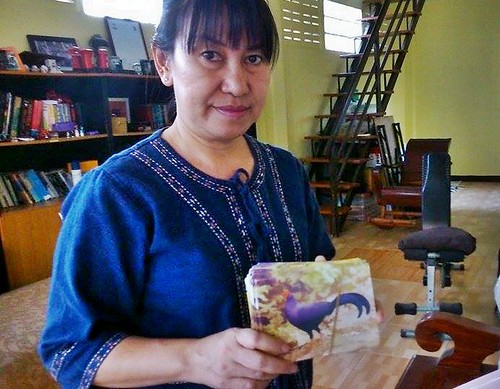 At that time most similar cases [lèse majesté cases] did not seem so promising, and most defendants chose to plead guilty and ask for a royal pardon. Why did he choose to fight the case?

First of all, I think that he didn’t do anything wrong. This is one of the main reasons why we decided to fight the case. Pleading guilty would mean that we accepted that we have committed a crime, but Somyos believes that he is innocent. We must understand that he was charged to bear the alleged crime instead of the writer. Therefore, he was sure that he didn’t commit any crime. Secondly, he believes that what he did was not a crime at all, so pleading guilty is unacceptable to him.

Many of his friends in prison who chose to plead guilty were released. Does this give him some discomfort?

In reality, the discomfort resurfaces all the time. There were people trying to convince him [to plead guilty] since the first day of his arrest. Everybody, including the DSI [Department of Special Investigation] themselves told him to just give in because there was no way to fight the case. [They tried] both to talk him into it and threatened him. The Pheu Thai Party [former elected administration under then Prime Minister Yingluck Shinawatra] offered that if he just gave in, they would begin the procedure to request a royal pardon as soon as possible. Also, all the other prisoners were telling him not to fight the case. They would say that all the other lèse majesté defendants gave in and that it was stupid and pointless to fight the case. People said many different things. Some came and told me that he should give in, so that he would come out sooner.

Do you feel that you want him to give in?

In fact, no. I believe that what he has decided is right. I agree with him that if we are not guilty, we shall stand firm to our cause because the day when we tell others that we confess, it would become our crime immediately.

Most importantly, he is not being harmed or experiencing ill treatment much under the current circumstances. We also receive support from others who urge us to continue to fight. Also, I don’t have economic problems. Without him, I can still take care of our family, so I support him in his struggle. At least, he doesn’t have to worry about family matters. One of the reasons why many families [of lèse majesté suspects] chose not to fight the case is that the suspects are the family breadwinners.

As for him, there are people who are willing to occasionally come to take care of him and visit him. I don’t go visit him every day, only once a week, but there are people helping out, so it’s not too much of a burden. If it’s like in China where prisoners are reportedly tortured and barred from having visitors, I might have decided otherwise. In prison, he was given the job of managing a library, so at least he can read or write.

Many people are wondering as to why he is very stubborn?

Actually, I knew that he was like this since we were married from the stories of his life that he told me. He did not just become stubborn like this of course, but since he was a student he was confident about his beliefs and ideas, so I shall not try to change him. I shouldn’t use the privilege as his wife or a family member to beg him if he has already made up his mind about this, what is best for him.

At the beginning, you and your family remained silent about this until other families and relatives of Article 112 [lèse majesté law] defendants came together as some sort of a network. What happened at that time? Were you afraid of repercussions?

I’m not engaging in political movements. I have my own career, which is not related to this at all and I didn’t feel comfortable to talk or express my opinions on the matter much at that time. I was just taking care of him, but did not want any public attention.

After that, it was natural because during the time when I went to visit him there were about 12-13 political prisoners and each of them would be regularly visited by their families and relatives, so we got know each other and talked and then formed some sort of a group. At first, it was only meant to help each other and talk to one another. We didn’t do much with it, but then we saw some issues that we can work on, such as campaigning to let the public know that there are problems about the use of this law [lèse majesté law] and about the impacts on families and relatives [of lèse majesté suspects].

What progress is there on the case now?

Last year, on 19 September, the Appeal Court handed down the verdict without informing me or his lawyer. He had to go to listen to the verdict alone. The Court of Appeal confirmed the ruling of the Criminal Court and we talked to each other that since we have come this far, we will go on until the end. His lawyer, Wasan Panich, will review and collect the arguments for the Supreme Court.

Do you still have hope that he will win the case?

With the current political situation, we have to analyse this carefully because in Thailand the justice system does not stand on its own, but it is greatly influenced by the political situation. If it was independent and free from all influences, I think the verdict would be different and we might possibly win the case. However, under the current political environment where we don’t have an elected government or democracy, but a military government which rules under martial law, he is likely to be prosecuted like before. Hopefully, his sentence might be reduced.

If you ask me what’s our highest hope in this struggle, I hope that the court will rule that he is not guilty and dismiss the case. This is what we wanted. To make it clear that this kind of case does not constitute a crime and that people who do something like this should not be prosecuted. Moreover, Somyos didn’t do anything wrong, but of course I have to think of the political situation as well.

If you ask what would happen if the Supreme Court still upholds the previous ruling, I think the result would simply be that he would be convicted at the final level. After that, perhaps he would be promoted from being one of the normal prisoners to a first-class prisoner and get the chance to be released a bit earlier.

The prison term of 11 years is one-sixth of his life, what does he plan to do in prison?

He reads primarily, I think. He writes a diary which is with him to contemplate about the past. He has the chance to talk to other prisoners from various backgrounds. There are some foreign prisoners as well, so he gets to practice his English through conversations and learn about the lives of others. The good thing about him is that he likes to help others. He helps others prisoners to overcome difficulties. He didn’t tell me this, but other prisoners who got out told me and thanked me later for the spiritual help they received from my husband for having him to help them out while they first got imprisoned.

He has his duties. We never know what will come into our lives, but when something occurs then we have to make the best of it. If we think that we can’t do anything and the time that we have to spend is wasted, then it would end up wasted.

He has changed quite a lot from doing all his activities freely outside to being locked up in prison, spending time to contemplate things. He is calmer, but he is still strong. In fact, perhaps even stronger. At least, he has overcome his fear. At first, just after he was sentenced to prison, he had to fight psychologically with himself a lot, but now he has already overcome that. Looking into his eyes, I don’t see the fear in his eyes. If you have experienced crises in life and overcome them, it wouldn’t be like that, so I think he is successful in this to a certain extent. Sometimes, imprisonment gives you something.

I can’t really answer this on behalf of all the others. However, from the feedback, many others see our struggle as a role model of some sort. No matter what the results will be, win or lose, they see that we have chosen to fight. They believe and think that if we can fight then they can too, regardless of all the difficulties in life.

I don’t expect his case to transform society, bring about democracy, or prevent another coup d’état, but at least people who are informed about our story might be encouraged. Sometimes, people encourage each other by their actions, which inspire others to continue to fight. Our actions might inspire others to fight on as well.

What time was most painful and uncomfortable for you?

The first years when I was following him while he was under custody because he had to stand trial in different provinces. It was painful for me to see him being put in chains or prison clothes and have to walk without shoes unlike normal persons. It felt terrible. The worst days were when I submitted bail requests for him. I submitted 16 bail requests until I had no hope left at the end. At the beginning, while we were fighting the case and preparing all the information, using claims under Article 19 (Article 19 of the Universal Declaration of Human Rights) to point out that he is not guilty, we were spirited. However, they still refused to grant him bail and he had to be taken back and forth from the courts to prison. It really felt horrible because I felt that I had failed to fight for him and I had to see him being sent back to prison without coming home with me, but I tried my best to get better and take care of myself because I have to continue to fight for him from outside.