Submitted on Mon, 16 Mar 2015 - 02:18 PM
The military has detained incommunicado for almost a week a female medic who is a key witness of the killing of red shirts at a Bangkok temple in 2010, said a human rights lawyer.
Winyat Chatmontree, a human rights lawyer from Free Thai Legal Aid (FTLA), on Monday told Prachatai that Nattatida Meewangpla, aka Wan, was taken from her house in Samut Prakan on 11 March. No one has been able to contact her since.
According to the lawyer, witnesses said at least three members of the Judge Advocate General’s Department in military uniform and two other military personnel in plainclothes came to the house in a van and a sedan and arrested her, citing martial law. They offered no explanation for the arrest.
A volunteer medic during the 2010 military crackdown on the red shirts, Nattatida worked alongside Kamonked Akhad, another volunteer, who was shot dead in Pathum Wanaram temple on 19 May 2010. An unconfirmed report says she is connected with “Ms Dear,” a woman accused of planning an explosion in front of Ratchada Criminal Court early this month. Winyat said it could be either incident which led to the detention.
“The military can’t claim that they have no knowledge about Nattatida. There’re witnesses who saw several military personnel as part of the arrest team,” Winyat told Prachatai, adding that her family members have not heard from her and did not know her whereabouts.
On Tuesday, the seventh day of the detention, the lawyer will inquire about Nattatida’s detention.
Thailand’s martial law allows the military to detain a person without charge up to seven days. The military must then either release her or press charges under Criminal Procedure Code.
According to Thai media reports, Winthai Suwaree, the junta spokesman, said he did not know about the case. 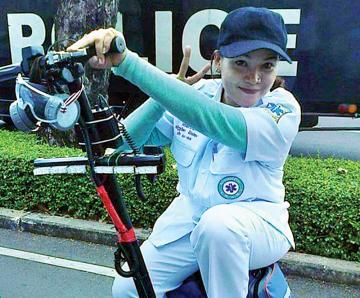