Submitted on Mon, 23 Feb 2015 - 11:19 AM
The criminal court sentenced two theatre activists to five years in prison for taking part in a political play "The Wolf Bride" deemed lèse majesté, but since the defendants pleaded guilty, the jail terms were halved to two years and six months.
The court earlier scheduled the reading of the verdict at 1.30 on Monday. After weeks-long campaigns by rights groups, inviting people to attend the verdict reading in the afternoon, the court on Monday decided to read the verdict in the morning instead. The lawyer representing both was not notified of the change and arrived at the courtroom just in time.  About 60 people packed the court room before the court read the verdict at around 11.30 am. Representatives from embassies and the United Nations also attended.
The court spent less than five minutes reading the verdict.
Last month, Patiwat S. (aka Bank) and Pornthip M. (aka Golf), pleaded guilty to the court for taking part in a political play, The Wolf Bride, which was performed in October 2013 at Thammasat University, Bangkok, to commemorate the 40th anniversary of the 14 October popular uprising.
When pleading guilty, the defendants asked the court to suspend the jail terms, given that one of them is still a university student and that they have never committed any crimes.
The court ruled not to suspend jail term, saying that although the defendants have clean backgrounds, their crime which is “co-organizing a play which falsely claimed, insulted, and threatened the monarchy to a large audience” is severe.
“Justice has died,” the father of Patiwat told Prachatai, adding that he had hoped that his son would get a suspended jail term, but “now his future is just jeopardized.”
After the court session ended, about 10 activists sang Dao Hang Sattha, composed by Chit Phumisak, the late revolutionary icon from the 1960s, to give moral support to Patiwat and Pornthip. They also flashed the three-fingered salute, the anti-coup gesture.
Brad Adams, Asia Director, Human Rights Watch, condemned the verdict. “The imprisonment of the two “Wolf Bride” play activists is yet another serious blow to freedom of expression in Thailand and another dark mark on Thailand’s already battered international reputation. Vowing to protect the monarchy, the NCPO junta has accelerated efforts to hunt down alleged lese majeste actions and statements, and prosecute people for peaceful expression of views, like conducting a play, posting online, or making a speech,” said Adams. 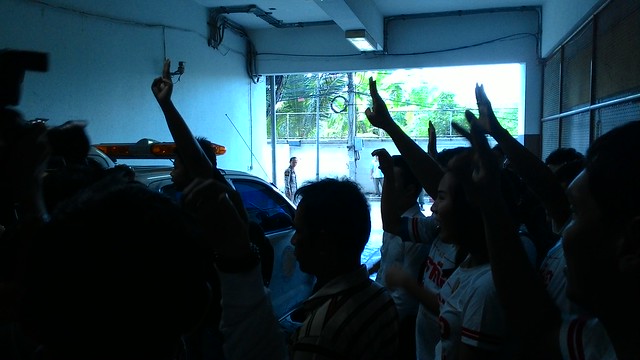 Patiwat is accused of starring in the play which centred on a fictional monarch in the role of a Brahmin advisor, while Pornthip was accused of organizing the play.
The play was organized by former members of the now-defunct Prakai Fai Karn Lakorn, which was affiliated with the left-leaning Prakai Fai political group.
Patiwat and Pornthip were arrested on 14 and 15 August respectively and have remained in custody since. The criminal court repeatedly rejected their bail requests.
Patiwat was in his fifth year at the Faculty of Fine and Applied Arts, Khon Kaen University. He is also the Secretary-General of the Student Federation of the North East.
Pornthip is a graduate from the Faculty of Political Science, Ramkhamhaeng University. She co-founded Prakai Fai Karn Lakorn in 2010. The group aimed to make performance arts more accessible to the grassroots. Most of their plays concerned social issues, inequality, and politics. The group was dissolved in 2012 due to differences among group members.
In early June, the junta’s National Council for Peace and Order (NCPO) summoned and detained about ten current and former Prakai Fai members and interrogated them about the play.
News
Article 112
court verdict
criminal court
Patiwat S.
Pornthip M.
The Wolf Bride
theatre