Home » Deconstructing Panitan Watanayagorn: Can Thailand be Isolated from the World?

Deconstructing Panitan Watanayagorn: Can Thailand be Isolated from the World? 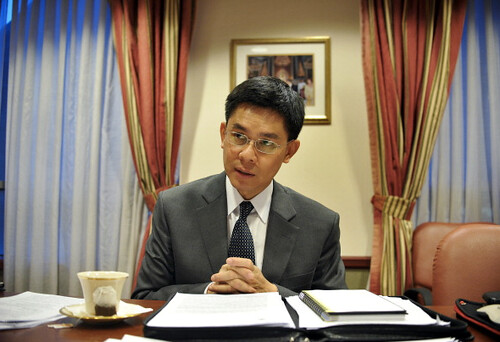 The discourse created by the military as well as the pro-junta intellectuals about Thailand being an independent and self-sufficient nation, capable of living in isolation from the international community, is nothing but a self-denial tactic and a legitimacy machine. Immediately after the coup of 22 May, an army of Western countries voiced their concern about the disappearance of democratic space. Subsequently, they imposed “soft sanctions” against the junta.

In the case of the United States, as a treaty ally of Thailand and according to its laws, it is obliged to penalize the Thai junta for undertaking a coup that overthrew an elected government. This is true with regards to any country receiving military aid from the United States when it experiences a coup. On the day of the coup, U.S. Secretary of State John Kerry said in a statement, “I am disappointed by the decision of the Thai military to suspend the constitution and take control of the government after a long period of political turmoil, and there was no justification for this military coup. We are reviewing our military and other assistance and engagements, consistent with US law.”

Accordingly, the US government suspended financial assistance to Thailand by US$4.7 million halting joint programmes for Thai police training, which included firearms handling and a trip to the U.S. for senior officers. Although the United States went ahead with its annual military exercise under the name code “Cobra Gold”, it was downgraded to reflect the overall US sanctions against the Thai junta.

The European Union initiated its own sanctions against the NCPO by announcing that it would freeze ongoing bilateral cooperation, including the suspension of all official visits to and from Thailand. In more specific details, the EU has halted its Partnership and Cooperation Agreement with Thailand, which was finalized in November 2013, but was yet to be ratified. The Agreement was designed to strengthen cooperation in a variety of sectors including “tourism, employment, education, migration, transport and environment.” It also aimed to promote a political dialogue between the two sides.

Additionally, the EU has shelved the negotiations with Thailand on the Free Trade Agreement. Bilateral trade between the EU and Thailand stood at 32 billion euros, or US$42 billion, in 2012. Such a move would cost Thailand many business opportunities in Europe. The EU has also imposed a travel ban for all members of the NCPO. The Council of the European Union released its statement on 23 June 2014, urging the military to restore the legitimate democratic process and to respect and uphold human rights and fundamental freedoms by freeing all political detainees. Failing to do so could result in “further possible measures” against the NCPO.

Meanwhile, the Australian government, on 31 May 2014, issued a statement confirming the postponement of bilateral military operations with Thailand. It said, “Australia has postponed three activities for coming weeks in Thailand: a military operations law training course for Thai military officers; a reconnaissance visit for a counter improvised explosive device training exercise; and a reconnaissance visit for a counter terrorism training exercise. The Australian Government has also put in place a mechanism to prevent the leaders of the coup from travelling to Australia.”

Under pressure from Western governments, the Prayut Chan-o-cha regime reformulated its foreign policy to diversify its options, instead of having to rely on the West as a sole source of economic interests and political legitimacy. Therefore, in the aftermath of the West’s sanctions, one could see the strengthening of Thailand’s relations with China, Japan, and other neighbouring countries, which are members of the Association of Southeast Asian Nations (ASEAN). The Thai government adopted a strategy of leaning towards these neighbours to offset the influence of the Western nations.

At the beginning, the strategy was promising. China was happy to trade with Thailand and keen to invest in mega-transportation projects. Similarly, Japan also reached out to the Thai junta, even rolling out a red carpet to welcome Prayut when he visited Tokyo on 8 February. Experiencing a Shinkansen ride, Japan’s bullet train, Prayut dreamed of getting Japan to invest in the high-speed train project in Thailand too. In terms of the Thai relations with some ASEAN countries, notably Myanmar and Cambodia, the visits of Prayut to these capitals, while rendering little economic benefits to Thailand, symbolized their endorsement of the Thai military regime.

But the gains from Thailand’s new friends in the region do not come without any strings attached. China’s investment in Thailand’s mass transportation will see a “hard loan” through which Thailand will be contracted to pay high interests to the Chinese companies. Japan, at the request of its Prime Minister Shinzo Abe, demanded that democracy be restored before a new wave of investment to Thailand could be considered.

These conditional economic projects with China and Japan coincided with even harsher respondes from the international community. The United States sent Daniel Russel, US Assistant Secretary of State for East Asian and Pacific Affairs, to talk to the junta in an attempt to request the latter to abolish the Martial Law. Meanwhile, the European Union has voiced its grave concern over the continued violation of human rights in Thailand.

Amid such challenges, the junta appointed its pro-coup academic Panitan Wattanayagorn, to speak on its behalf in dismissing the international pressure. Panitan stated that the Martial Law was still important so as to allow the military government to move ahead with the reforms without any interruption. He added, “International organizations may pressure us, but they cannot interfere in Thailand’s internal affairs.” In other words, Panitan was confident that Thailand could be isolated from the global society.

Panitan’s statement is misleading. Thailand, as a medium-sized power in Southeast Asia, with its inexorably economic and political connections with the region and the world, will not be able to isolate itself from the global community. Instead of opening to criticisms, Panitan suggested that Thailand must retreat further into its own confortable shell. His unrealistic suggestion only serves one purpose: to delegitimize the outside intervention as well as to add legitimacy to the many wrong policies adopted by the military government.