A civil society group submitted a complaint urging the government to solve land conflicts between poor urban communities and private landowners after the poor were threatened with lawsuits and evictions.

Around 100 members of the Four Regions Slums Network (FRSN), an NGO campaigning for Thailand’s poor communities, on Tuesday morning rallied at Government House and submitted a complaint to urge the government to solve prolonged land conflicts between private landowners and two landless communities in Bangkok and a nearby province.

The two embattled slum communities are the Rongwai Community in Suan Luang District of Bangkok and Bo Bua Market Community of Mueang District in Chachoengsao Province, where some of the residents have been battling lawsuits and threats of eviction for a long time. 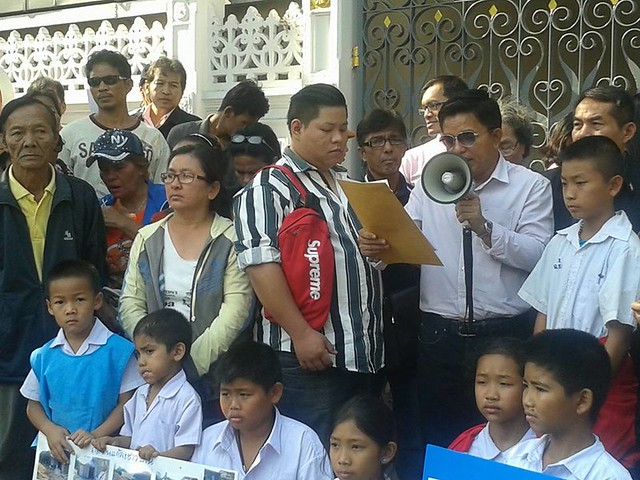 Jamnong Nupan, the leader of Four Regions Slum Network, announces the group's statement in front of Government House on Tuesday

Bobua Market Community, with 250 households, is located on State Railway of Thailand (SRT) land. The SRT Board in September 2000 agreed to lease the land to the community in accordance with the residential development policy of the government. However, the SRT later leased the land to a private land development company, who later, together with the SRT, filed a lawsuit against 11 villagers for trespassing on the land.

The company also reportedly sent people to intimidate community leaders and tried to rush the legal process to evict the villagers, which led to a confrontation last week between the villagers and the company.

Rongwai Community, with 38 households, is an FSRN member community which is now in the process of being granted a community title deed. However, seven families in the community have now been accused of encroaching onto private plots and have reportedly been threatened with lawsuits after Bangkok land registration officials and private owners of the adjacent plots of land re-measured the border of the community plot.

According to the statement, the FRSN requested Panadda Diskul, the Prime Minister Office’s Minister, and the chair of the committee to solve land conflicts of the People’s Movement for Just Society (P-Move), to allow the residents of the two communities to stay temporarily before any settlement is made among all parties involved.

The group also urged the government to comply with Order No. 66/2014 of the junta’s National Council for Peace and Order (NCPO) that poor villagers who had settled prior to the crackdown on land encroachers (Order No. 64/2014) was announced in June 2014 shall not be affected by government evictions.