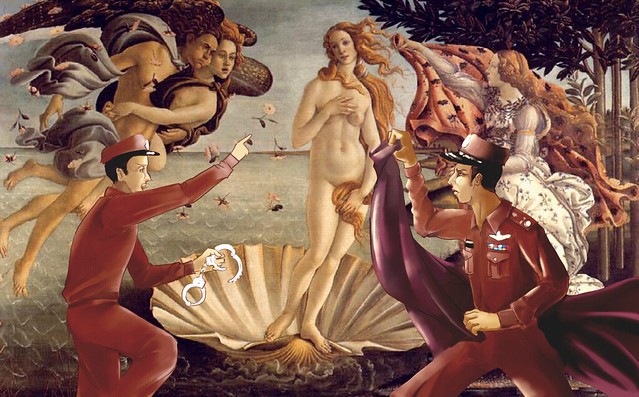 Not that Thailand has no laws banning pornography. Article 287 of the Criminal Code bans the trade in objects deemed obscene and Article 14 (4) of the Computer Crime Act bans the import into a computer system of any pornographic data.

The bill therefore is aimed at prosecuting those who produce, trade, distribute, and publish obscene or violent "materials which induce dangerous behaviour."

The bill defies "materials which induce dangerous behaviour" as any publication, printed matter, photographs, films, messages, data or anything which encourages or induces the following:

It then explains that “deviant sexual behaviour” is

Jompon Pitaksantayothin, a law academic from the University of the Thai Chamber of Commerce who is an expert on laws related to child pornography, said the bill can be called discrimination against people with certain sexual orientations and violates freedom of expression. “This is merely expression related to sex. When the state tries to control this, suppress this, is it the state’s business?”

For Lakkana Punwichai, aka Kampaka, a TV personality and controversial critic on gender and politics, the bill seems to care more about imposing a defined set of morals on society rather than freedom of expression.

The administrator of the popular satirical anti-establishment Facebook Page called Hod Sad V2 said the bill seems to be very broad and the application of the bill is likely to cover large areas of life. “I think it’s a private taste, it seems that they are trying to brand others who consume media that they prohibit as bad people. But in fact, it’s more to do with personal taste, isn’t it?” added the satirical Facebook page administrator, who did not reveal his real name.

Article 18 of the bill stipulates that anyone who, for the purpose of distributing and showing, produces and possesses material that could induce people to perform unlawful sexual acts and other criminal behaviour could face one to five years imprisonment and a 100,000-500,000 baht fine. There are exceptions for research and medical purposes.

Article 19 stipulates that whoever distributes or shows such materials will face the same penalty as offenders under Article 18. The distributors, however, will have to serve 1.5 times the jail terms of Article 18 if they distribute the materials on a computer system.

Any cinemas or hotels showing such material will face de-licensing.

Jompon said the jail terms in Article 18 and 19 are unproportionate and too severe. He also questioned the intention of the bill. "The principle of the bill is to protect children, but in the end why does the law also prohibit adults from watching these materials?" he asked.

The law was drafted by the Social Development and Human Security Minister as part of the controversial Digital Economy bills which were approved in principle by the junta late last year.

Another great threat to freedom of expression of the bill is Article 22, which stipulates that any internet intermediary who knows that there are, in a computer system under their control, materials inducing dangerous behaviour, but does not immediately remove or delete such materials, must serve a jail term of up to five years or pay a fine up to 500,000 baht, or both.

This is considered worse than the notorious Article 15 of 2007 Computer Crime Act (CCA), in which intermediaries have to serve jail terms if it is found that they “consent” or “encourage” such posting. The amended CCA, expected to be deliberated by the National Legislative Assembly (NLA) soon, has removed this part, and replaced it with a notice and takedown procedure.

Article 14 (2) allows the police to search the body of a person and vehicles without a warrant when they suspect that the person or vehicle is carrying illegal material. The search of places still needs a court search warrant.

The law academic said this definitely violates the right to privacy.

Just imagine you’ve downloaded a bit torrent file of Fifty Shades of Grey in your laptop and carry it around; if searched, and found guilty, you have to face at least one year in jail.