Submitted on Mon, 12 Jan 2015 - 12:15 PM
After the media reported that the UNHCR had granted a high-profile lèse majesté suspect refugee status, Thai royalists fiercely attacked the UNHCR on its Thai Facebook page, saying they would stop funding the organization and threatening to harass its funding officers.
Thai royalists threatened to withdraw monthly donations to the UN refugee agency in Thailand over the agency’s role in giving refugee status to a redshirt political activist Ekapop L., (aka. Tang Achiwa), who is now living in exile in New Zealand. 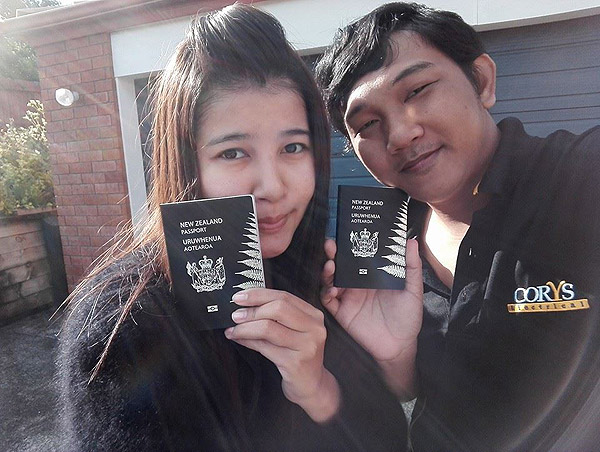 Ekapop and his wife claim to hold New Zealand passports and say they live in Auckland, New Zealand

Many Thai royalists claimed on a Facebook Page called ‘Million Names Against Amnesty (Lan Chue Tan Lang Phit)’ that they have cancelled monthly donations to the United Nations High Commissioner for Refugees (UNHCR) and many more claimed on the Facebook Page that that they will also do the same.
The threats to withdraw funding for the UNHCR came after it was revealed by Thairath Online that the organization granted refugee status to Ekapop L., an anti-establishment red-shirt activist, who is in exile in New Zealand.
Ekapop was accused of defaming the monarchy when he spoke at a red-shirt gathering at Rajamangala Stadium in eastern Bangkok in late 2013. The police issued an arrest warrant against him in early 2014. He fled to Cambodia and was later granted refugee status by the UN refugee organization. He and his wife claim to hold New Zealand passports.
Examples of hate comments from the Thai royalists:
“If you don't answer why you helped Tang to get refugee status ... I'll go and destroy the [UNHCR] donation booths and slap the staff. F** UNHCRThailand"
"UNHCR = Ungrateful to Thailand"
“Since the UNHCR protected a criminal running away from a charge, why do Thai people have to help an organization that assists a criminal on the run? Just let the US pay the bills, no need to bother Thai people, this is enough.”
“UNHCR, you have been staying under the graciousness of the King of Thailand, but when people insult and defame the owner of this country, do you assist these wrong-doers instead? If the New Zealand government is willing to accept asylum seekers who have committed crimes, then they should accept and take all the other refugees here into their country as well because it is proven that it is a very nice country that accepts all sorts of refugees.”
Meanwhile the ultra-royalist Rubbish Collection Organization also issued a statement condemning the UNHCR, saying that Thai political refugees are using the UNHCR to undermine Thailand and the Thai monarchy.
On Sunday, the UNHCR Thailand Facebook page responded to the attack by posting  "The UN Refugee Agency is a humanitarian and non-political organisation."
Earlier last week, Prayut Chan-o-cha, the head of the junta, revealed during an interview on Tuesday that the Ministry of Foreign Affairs (MFA) sent a letter to the New Zealand authorities in an attempt to try to extradite Ekapop.
The letter pointed out to the New Zealand government that the Thai authorities had issued an arrest warrant under Article 112 of the Criminal Code against Ekapop, and that in order to prevent the suspect from creating trouble in Thailand from overseas, the New Zealand authorities should cooperate with Thailand by extraditing the suspect.
However, according to the New Zealand Herald, New Zealand’s MFA minister refused to make any comment on the Thai government inquiry and stated that asylum seekers who have obtained refugee status from the UNHCR can be accepted by New Zealand through a quota system.