Home » The fable from the cells of detention continues: Part 2 of ‘Little Foot’ by Golf

The fable from the cells of detention continues: Part 2 of ‘Little Foot’ by Golf 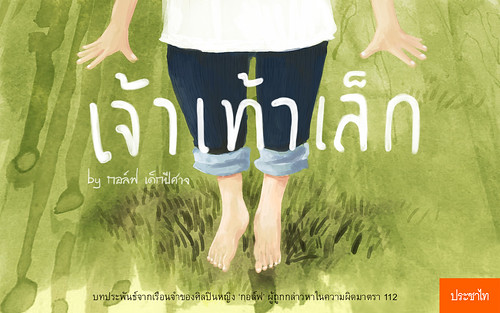 Note: The fable below was originally published in Thai on Prachatai on 9 December 2014. The first part was published in October, in Thai here and in English here on Prachatai. The author, Pornthip (Golf) Munkhong, is a detainee currently being held in pre-trial detention in an Article 112 case. Golf was arrested on 15 August 2014 due to her involvement in the performance of a play, ‘The Wolf Bride,’ in the events commemorating the fortieth anniversary of 14 October 1973 last year. Her detention was renewed 6 times before the prosecutor charged her, along with Patiwat (Bank) Saraiyaem, with one count of violating Article 112 on 25 October 2014. Her lawyers have opposed their continued detention and requested bail numerous times. Each time, the Court has refused bail on the basis that the complaint against them is grave and there is concern that they may flee. Their first post-charge appearance will be next week, on 29 December, in the Criminal Court in Bangkok.

Golf is from Phitsanulok and her family has a cassava farm. She graduated from the Faculty of Political Science at Ramkhamhaeng University. Since the end of secondary school, she has been involved in social activism and various outreach activities. She has many artistic abilities, including drawing and writing fables. But she has a special fondness for performance, and founded Prakai Fai theatre troupe before it dissolved in 2012. She once gave an interview about her dreams and said that she, “wanted to perform plays in the provinces, perform in different places. And, importantly, I want to perform plays for children to watch. I want to tell children new fables -- fables of ordinary people who change the world.”

She wrote the fable translated below while in detention and sent it via postal mail to a close friend. The fable is about her dreams and is encouragement for those outside the prison, especially children, with whom she often did activities.

To older sister xxxx. Pass it on to the children, too.

Daylight’s arrival was marked by the emergence of orange, ombre, red, and pink along the horizon. Mist hid the very white clouds. The hardened frost slowly melted into dew. Little Foot raised his head to look at the sky and said, “It’s time. I need to go, what should I do?” Little Foot pooped at the same time every morning. He turned left, turned right and walked to the bushes at the side of the path. He put his things down, pulled down his pants, and squatted. He went immediately. A large pile of poop was cause for amusement in Little Foot’s heart. He conjured up a picture of a person who did not pay attention to where he was walking who stepped right into it. Little Foot used twigs nearby to wipe himself. He put on his pants, picked up his belongings, and walked again through the frigid air. Even though the air made him feel very cold, his joy when he thought about the pile of shit propelled him swiftly form the scene of the incident. In truth, Little Foot wanted to secretly watch the unlucky ones who stepped into it. But he had already firmly made up his mind that day to walk on, no dilly-dallying. The amusement was therefore confined to his heart… The cold air kept his sweat from leaking out of his skin. Instead, his breath puffed out as steam from his mouth and nose. Clear mucus came from his nose as well. Sunshine softly touched his face.  Like a child playing hide-and-seek, sometimes the sun hid in the valleys and then it would emerge to be seen. The path became wider than before. All that was behind Little Foot were lofty trees, the forest, and the path he had already walked upon. He could no longer see the village. Walking since before sunrise until now made Little Foot’s belly grumble. He looked around and headed towards a large tree a little further up at the edge of the path. He sat down, opened the banana leaf packet of food and ate ravenously. The scent of the banana leaf remained on the rice before it entered his mouth. He left half the salted mackerel uneaten because it was too salty. But when he ate it with hard kernels of rice that were grown in the hills, the taste was right … it was delicious!! Little Foot did not get up, but gulped water down his throat and rested.

* Upon being taken into detention in Thailand, an individual loses her previous title. Rather than being “น.ส.” (No. So.) or “นางสาว” (Nang Sao) which corresponds to “Miss,” one becomes “ข.ญ.” (Kho. Yo.) or “ขังหญิง” (Khang Ying), which means “female detainee.”