The police arrested two men for distributing anti-junta leaflets last week and charged them with instigating conflict and instability in the country.

According to Matichon online, Pol Maj Gen Sriwara Rangsiphramnakul, commander of the Metropolitan Police, held a press briefing on Tuesday about the arrests of Sithitat Laowanichtanapha, 54, and Wachira Thongsuk. The two men were accused of distributing fliers against the junta at the Victory Monument in central Bangkok in the early hours of 23 November.

The two were arrested on 25 November by Metropolitan Police and military personnel. 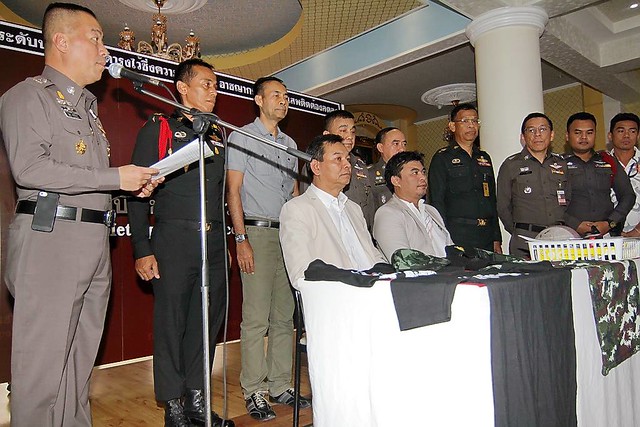 Sithitat Laowanichtanapha and Wachira Thongsuk, the distributors of anti-junta leaflets at the Victory Monument in Bangkok on 23 November, at the press briefing on Tuesday

At the press conference, the police charged them with distributing leaflets to instigate conflict, defying the junta’s National Council for Peace and Order (NCPO) Order No. 97, and causing disturbances and conflict in the country.

The suspects pleaded guilty. However, they stated that they only wanted to raise concerns about democratic values and that they will submit 200,000 baht bail requests.

Col Winthai Suwari, spokesperson for the Thai Army, stated earlier that the two suspects’ act of distributing anti-junta leaflets was based on false information, distortion of facts, and personal emotions.  He added the act showed bad attitudes, caused untidiness in public areas, and was useless.