The victim of a violent confrontation between the pro-government and anti-government camps in February has died today without receiving justice.

Akaew Sae-Liew, a 72-year-old street vendor, was shot on his neck by gunmen, believably to be affiliated with the People’s Democratic Reform Committee (PDRC), during a confrontation between the red shirts and anti-election PDRC guards at Lak Si Intersection on 1 February.

After the incident, Akaew suffered from paralysis for eight months before his death this morning.

Since the coup d’état in May, there has been no progress in his case.

The violence erupted one day before the general election was supposed to be held on 2 February, when PDRC protesters barricaded the election venue at Lak Si to prevent the election from taking place, leading to a violent confrontation with the red shirts, the supporters of the now-defunct Yingluck government. 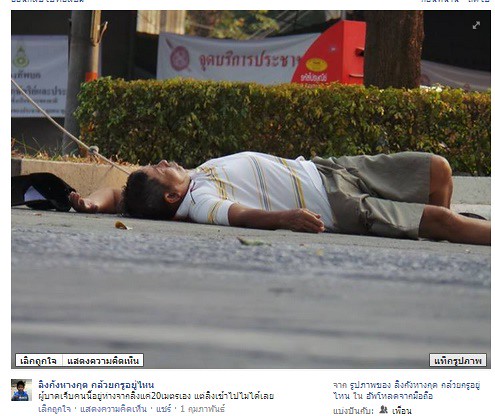 Photo of Akew taken by Yongyut Makkay at 17:15 o'clock after he was shot

After Akaew was shot, Chitpas Kridakorn, a spokesperson of the anti-election People’s Democratic Reform Committee (PDRC), as well as many other PDRC supporters, used him to create legitimacy for their movement on Facebook, blaming the red shirts for shooting him. However after Akaew’s daughter revealed that her father was not a red-shirt supporter, and pro-election, Chitpas quickly deleted the post.

Some went on to accuse him of being the leader of a militant Cambodian group. Meanwhile, the popcorn gunmen were praised for coming to ‘help’ the PDRC protesters.

According to Matichon, however, the direction of the bullet was from the PDRC guards, where the well-known ‘Popcorn Gunman’ and ‘Guitar Gunman’ were shooting at the red shirts.

On 20 March, the police announced that they had arrested Wiwat Yodprasit, who was suspected of being the Popcorn Gunman, so called because he used a popcorn sack to conceal an M16 used to shoot at red shirts in Lak Si on 2 February.

At the press conference, however, the police made no claim that Akaew was killed by accused.

Contrary to the police findings, Puangthip Boonsanong, a lawyer from the Network of Students and People for Reform of Thailand (NSPRT), a group allied to the PDRC, claimed that Wiwat was a scapegoat who was tortured by the police into admitting that he was the Popcorn Gunman.

After his death, Walaiporn Sae-Liew, Akaew’s daughter, urged that the violence that happened to her father should never happen again and that Thai people should use reasons instead of arms to solve conflicts.