Submitted on Wed, 23 Jul 2014 - 01:43 PM
It has been almost a month since over a thousand villagers in a forested area of northeastern Buriram Province were evicted from Dong Yai Wildlife Sanctuary, where hundreds of families have been settled since the cold war era, making a basic living from agriculture.
In the 1960s, the military let some locals settle in the forest area to deny space to the Communists, whose stronghold was the northeastern region. Ironically, the villagers are now facing violent eviction by the military with no financial assistance or compensation in sight. Many houses have already been demolished while around 50 families still refuse to leave their homes and face daily intimidation by the authorities.
“I know society always condemns us as people who destroy the forest,” said one villager in Khao Bat village of Non Din Daeng District who asked not to be named. “But we do take care of the forest. We also grow trees, but the plants we grow also have to be edible.”
The eviction came after the junta’s National Council for Peace and Order (NCPO) issued Order No. 64/2557 on June 14 to suppress deforestation and forest encroachment nationwide. Two days later it issued a subsequent Order No. 66/2557 saying the operation must not affect the poor, the landless or those who were living on the land before the order was implemented. 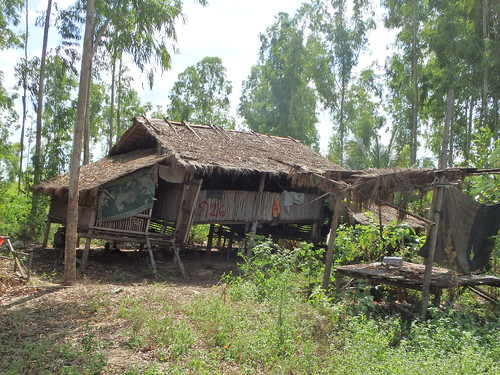 Occupying about 600 Rai of the Dong Yai Wildlife Sanctuary, Khao Bat village comprises about 174 households
where they live without electricity. They rely on the rains and get water from the community’s well.
While declared a conservation forest in 1996, Dong Yai Wildlife Sanctuary was given as a concession by the local Tambon Administrative Organization in 2009 to private companies to grow eucalyptus, which is used to make products such as paper.
The villagers, who have been legally allocated land to live on by the government since 1979, filed complaints to the government led by then Prime Minister Abhisit Vejjajiva, saying that their community rights were violated.
The Abhisit government set up a committee on the issue and concluded that the villagers could stay in the disputed area until a solution was found.
The situation deteriorated after the coup took place in May 22 and the junta soon issued its order to end forest encroachment. According to the villagers, soldiers visited the villagers more often and informed the village headmen that from now on the army would be in charge of the disputed area.
After that, the police and military forces, together with officials from the Department of National Parks, Wildlife and Plant Conservation came and gave warnings to the villagers, while spraying marks on the houses as urgent signs that they must leave. 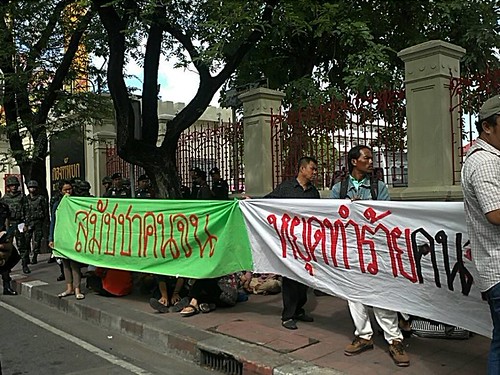 Local activists led by the Assembly of the Poor came to Bangkok on June 15 to request the NCPO
that the eviction in Noan Din Daeng must stop.
Most of the villagers from other villages in the forest have already moved out since July 7, the deadline imposed by the military, but some Khao Bat villagers still refuse to leave. When local activists came to Bangkok last week to plead with the NCPO to stop the evictions, the military detained them for up to seven days without giving any reason.
Their efforts were in vain as the military continued to use force to evict the villagers, claiming that they need to save the forest.
Those evicted from their homes were staying at the community temple as a temporary shelter while it remained unclear where they would be relocated. After a few weeks, the district authorities refused to let them to stay at the temple, so the villagers had to move into a small weaving shed which belongs to some village headmen.
The military said they would provide relocation sites but according to Human Rights Watch, they “are wholly inadequate for human habitation because they lack adequate temporary shelters and have no access to water.”
The villagers said most of the men in the villages have left for fear of a possible clash between the villagers and the security forces. Staying at the temporary shelters were about 50 women and children who could not go to school for fear that they would not be allowed back if they leave the area. 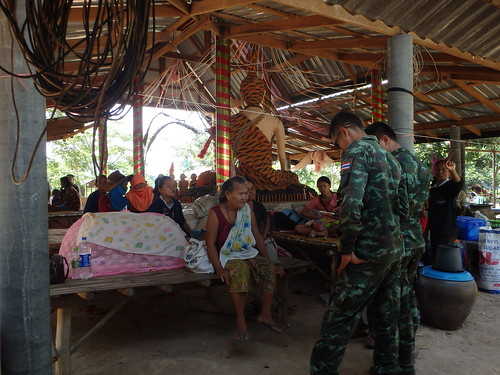 Dozens of women from the village stay temporarily at the community temple after being evicted
The soldiers are still forcing villagers to sign agreements and leave their homes, while informing them that they would close the entrances to the forest to prevent people from coming in, and would start a reforestation process.
“I only have my bare hands. If they do it, I just have to accept it because I don’t know what to do,” said an 18-year-old girl who wished to remain anonymous. “I don’t know where to go. If they relocate us into the city, I do not know what to do because I’ve grown cassava and rice all my life.”
Another villager said she couldn’t help but doubt whether the NCPO order was being implemented properly, as Order No. 66 specified that they should be exempted from being evicted.
“After the coup, the NCPO said they would return happiness to the Thai people, especially the poor,” said one woman who asked not to be identified.
“What we are asking is if this is how they return happiness to us. By eliminating our homes from the land? By not negotiating on an equal basis as we’ve done with governments in the past? There is only suffering left and no happiness at all.”
News
Buriram
encroachment
eviction
forest
Khao Bat village
National Council for Peace and Order (NCPO)
Non Din Daeng