Submitted on Tue, 22 Jul 2014 - 09:52 PM
Villagers from northeastern Loei Province have urged the military junta to allow villagers' participation in solving a conflict with a mine operator after the military junta intervened and tried to solve the issue without local participation.
The villagers in six villages in the province have been protesting against mining firms that set up operations to extract resources from the area for the past few years. Mining activity has resulted in large-scale pollution in the area.
During a public hearing conducted by the villagers' Khon Rak Ban Koed Group (KRBK), last Friday, villagers agreed to urge the junta to give them protection and allow for their participation in the conflict resolution process.
According to Protection International, the villagers do not accept the junta’s proposal only to close the mines nor the committees appointed by the junta to address the issue. They are calling for more participation in the process towards conflict resolution.
KRBK said the process should be led by the local people. The group also expressed concerns regarding the manner in which the committees have been set up, their composition, their mandate and their method of operation.
"If an authority attempts to improve the lives of the people, it should involve two fundamentals: protection and participation. Today we are conducting a public hearing to prove that, if there is the political will, the process can be fair, transparent and accountable. If the process is led by the people, then the rights and opinions of the people will be valued, and the people’s contribution will be ensured in the process towards resolution of this issue,” said Sum Srithong, the group leader.
Most committee members are police officers and soldiers based in the area. The few local voices on the committees are the village headman and the Local Administrative Organization head. However, the KRBK are denied participation.
The KRBK consists of villagers from six villages affected by the gold mining operations of Tungkum Ltd, the mining operator in the area. The group was set up to defend natural resources in the area and prevent exploitation of national resources by investors. 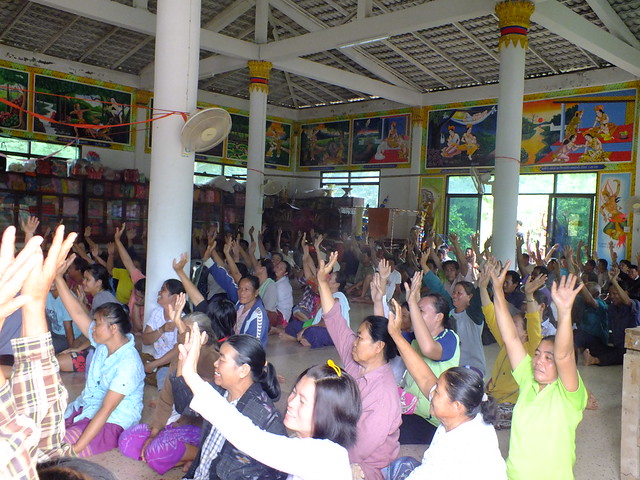 A public hearing conducted by the KRBK group
The village communities demand that the junta and the relevant authorities:
1 Revoke the mining concession of Tungkum Co Ltd, in 6 areas (Phu Thap Fa and Phu Sam Pa Bon in Tambon Khao Luang, Wang Saphung District of Loei Province)
2 Revoke the mining permit of Tungkum Co Ltd for mineral processing which includes initial breaking down of the ore by crushing, grinding, sieving, etc., as well as other metallurgical processes.
3 Order Tungkum Co Ltd to remove heavy machinery and all equipment (include office equipment) from the mines.
4 Transport all the (mined) ore from the mines.
5 Close the mines to enable rehabilitation of the environment, biodiversity, and also the wellbeing of the people.
6 Provide adequate remedy (and/or compensation) for all affected villages in the 6 areas affected by the mining activities.
KRBK has been protesting against Tungkum Ltd’s mining operations since 2008 and last October, after six years of protests, KRBK installed three checkpoints to monitor operations around the mine site as a response to being excluded from a public hearing last September. At the final checkpoint, villagers installed a blockade to prevent the transportation of cyanide onto community roads.
Since then, Tungkum Ltd has taken KRBK to court and filed seven lawsuits against 33 villagers. Charges include trespass and loss of property. A total compensation of 270 million Thai baht was demanded by the company.
In May, about 300 armed men attacked residents of Ban Na Nong Bong in Tambon Khao Luang. The six-hour-long attack left the villagers in despair at the state’s inability to protect them. Repeated calls to the police were made but only 2 officers arrived three hours after the calls, and left soon after realizing they were outnumbered.
The conflict has yet to reach a resolution. Talks between the gold mining firm and villagers have failed, with reports citing headstrong demands from both sides. The junta has set up 4 committees to deal with the issue: one to solve the gold mining problem; one to solve the water problem; one to rehabilitate health and the environment; and one to hold a public hearing.
News
coup 2014
gold mine
Loei
mine
mining
North East